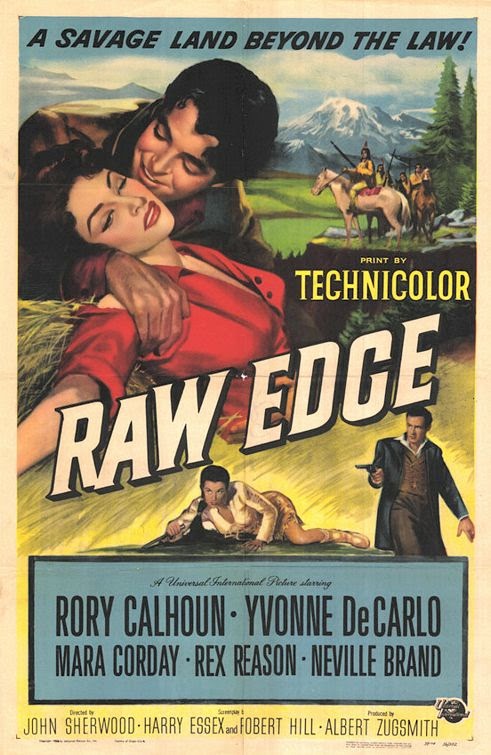 Rory Calhoun and Yvonne De Carlo share top billing, but De Carlo seems to get more of the screen time in this odd adult western. Claiming to be set in 1842 Oregon, the story is said to be taking place in disputed territory by both Great Britain and the United States. But those two geopolitical entities have little to do with the film’s plot. The Oregon woods are dominated by a single tyrannical settler (Herbert Rudley), who makes and enforces all the law there is out here. A lone gunman, according to legend, will change all that.

Plot. Other men who have settled on this frontier outpost suffer from the shortage of women. By Rudley’s decree, any unattached female becomes the property of the first man who can lay claim to her. And it’s not just an excessively harsh rule for women, as we soon learn when Rudley’s wife (De Carlo) gets pawed over by an assailant in a dark barn.

The man believed to have assaulted her (John Gavin) is quickly hanged, and his newly widowed wife, an Indian woman from a local Yakima tribe (Mara Corday), becomes the object of a two-fisted melee among several sex-starved men, one of whom gets shot quite dead despite his physical superiority, as revealed by the shirt torn from his back. The fittest survive to reproduce in this Darwinian world only if they are ready with a gun.


We meet men entertaining ideas about enjoying face-time with De Carlo, including a father and son pair (Neville Brand and Emile Meyer). Then Calhoun shows up from Texas, knocking the trail dust off with his hat. By the looks of him, he is a gunslinger. Eventually we learn that he has come to avenge the death of his brother (Gavin).

When De Carlo’s husband leaves the ranch with a surveying crew, she finds herself alone and abandoned. The Indian help pack up and leave to join their tribe, who are going on the warpath. “I can’t run this place by myself,” she complains, while the surrounding mountain ridges come alive with ominous smoke signals.

Calhoun and another man (Rex Reason) offer De Carlo protection, while making an effort to keep her out of the hands of Brand and Meyer. At one point this involves Brand, De Carlo and Calhoun in a three-way struggle staged in a river, where two of them spill over a high waterfall. With the exception of the well-mannered Reason, who is a gentleman gambler, setting so many male characters against each other releases a tidal wave of testosterone that triggers scenes of gunplay and fistfights. Meanwhile, De Carlo does her best to stay out of the way and escape the mayhem, or a worse fate.

Her villainous husband eventually meets his end at the hands of the Indians, and Gavin’s widow finally has her revenge. Calhoun, the lone gunslinger come to settle scores with the man who hanged his brother, never has the face-down we have been led to expect. He heads back to Texas, with an invitation to De Carlo to return with him, which she gladly accepts. So romance flickers to life between them in the film’s final frames.

Wrapping up. The plot of Raw Edge is a hodgepodge of scenes and situations borrowed from scores of B-westerns, infused with a racy shock of overstated sexual suggestiveness. Hard to say what anybody involved with the film was thinking, if the script demonstrates thinking at all. A search at imdb.com reveals that screenwriter Harry Essex is best known for 1950s cult classics The Creature from the Black Lagoon and It Came from Outer Space. Maybe that’s enough said.

Among his 100-plus screen credits, handsome Rory Calhoun made numerous westerns, with a long stint as a continuing character in TV’s The Texan (1958-60). He had a sleepy-eyed presence on screen that suggested a relaxed indifference to danger and the expectation of effortless intimacy with women. Both are true of this film, though he tends to disappear among the large supporting cast, while Yvonne De Carlo and Mara Corday have strong roles. The film almost passes the Bechdel Test by having two named female characters, who actually have a scene together (although their conversation is about a man).

This 76-minute western was shot in Technicolor with the San Bernardino National Forest standing in for Oregon. Singer-songwriter Terry Gilkyson provided the western ballad sung by him over the opening and closing credits. With a long career in Hollywood, he is remembered for the 1950s hit singles “Cry of the Wild Goose” from Saddle Tramp (1950), “Memories Are Made of This,” and the Calypso song, “Marianne.”