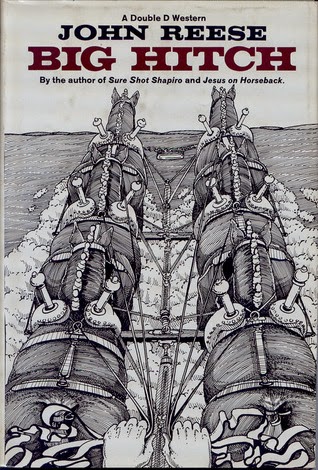 This is a western that tells you things you didn’t know instead of repeating the timeworn clichés. True enough, the central character is a cowboy and “the worst no-account fool west of the Mississippi but the finest horseman anywhere.”

He’s got his eye on a girl who’s his boss’s granddaughter, an independent-minded suffragist he lacks the class for. But further resemblance to the standard western formula ends there. The plot of the novel involves a “big hitch” of six matched Clydesdales, who perform in public for an Omaha brewer, and that makes all the difference.

Plot. Mase Grayson is discovered by the brewer, August Heillman, on an excursion into Arizona Territory in search of an artesian well to supply water for a new brewery. Hooking up a team of wild horses and mules to cross a flooding creek bordered by quicksand, Mase demonstrates a fearless and uncanny command of draft stock.

He is soon hired on by Heillman as driver for his Clydesdales. They have been disappointing him in competitions and reflecting poorly on the Golden Age Beer they represent. Only problem: the team already has a driver, one Chauncey Battlestock.

He’s an Englishman with not only a proprietary attitude toward his hitch of horses. As a former sergeant-major in the Royal Horse Guards, wounded in India, he has no intention of yielding rank to a scruffy cowboy. As a further hold on his position, he’s also won the affections of Heillman’s granddaughter, Ilene, who is ready to run off with him if the old man will not approve of a marriage.

Mase settles for a job breaking and training three-year-olds and eventually hatches a plan to put together a Big Hitch of unmatched teams. This is where you learn something you probably don’t already know, and horse lovers among readers should be especially taken by how Reese presents the subject.

Romance blooms confusingly for Ilene as she finds herself drawn to Mase despite her attachment to Chauncey. And a crisis looms as Chauncey loses face as a driver unable to bring home the blue ribbons like he used to. Mase finally has to save the day—with both teams of Clydesdales and something called “the water trick” he once learned from Indians.

Wrapping up. At 168 pages, Big Hitch is a short novel with much to recommend it in the way of humor, strong characters, conflict, and suspense. You won’t look at the Budweiser Clydesdales again without thinking, “Oh, I know something about that.”

Big Hitch is currently available at amazon and AbeBooks. For more of Friday’s Forgotten Books, click over to Patti Abbott’sblog.
Tweet