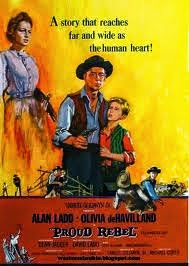 This Alan Ladd western is full of moments resonant with an earlier film about a man and a boy, Shane (1953). In this one, Ladd’s calmly soft-spoken Confederate veteran (the Rebel of the title), seems a direct descendant of the gunslinger who helps a family keep their homestead and rides off afterwards, despite Brandon de Wilde’s cries for him to come back.

Plot. The plots of the two films have some similarities. Ladd’s character shows up while en route to somewhere else and takes a job with a settler (Olivia de Havilland), who pays a fine to keep him out of jail after a street fight involving a neighboring rancher (Dean Jagger) and his two sons (Harry Dean Stanton, Tom Pittman).

The boy in this story is Ladd’s young son (played by Ladd’s actual son, David). He suffers from having witnessed the death of his mother during the War and has been so traumatized that he cannot speak. Traveling with them is the boy’s prized Australian sheep dog.

Jagger, it turns out, wants de Havilland’s acreage to graze his sheep. He and his sons make threats, pull down her fences, and set fire to her barn. While Ladd works off the debt he owes her, de Havilland begins to feel a growing attachment to him.


Hoping to help the boy recover his speech, Ladd sells the dog to cover the cost of an operation. When surgery is unsuccessful, he attempts to retrieve the dog, but it’s now fallen into the hands of Jagger and his sons. In a shootout among the four men, the boy recovers his voice, and in the final scene they rejoin de Havilland at her farm, where it’s evident that she, Ladd, and the boy will remain together as a family unit. 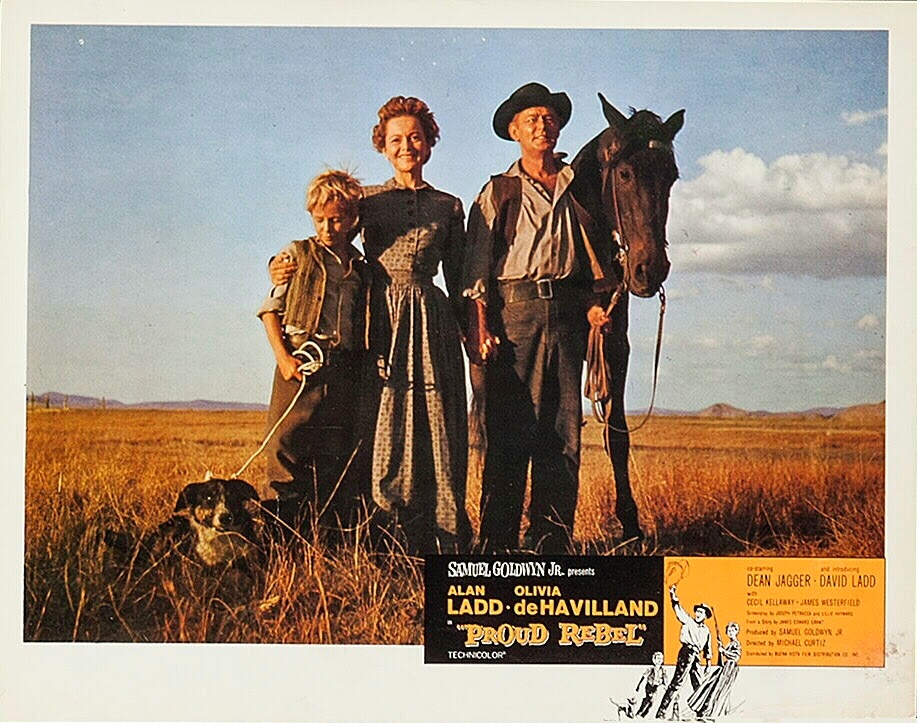 Characters. Alan Ladd may lack the stature of bigger name cowboy actors, but I have grown to like his quiet and respectful presence on screen. He is not the dark and nearly scary man of mystery in Schaeffer’s novel, Shane, but the character he brought instead to the film came close to redefining the role for me.

In this film his character is a decent man who does not lose his reserve, even when found guilty of assault and battery when we know that the street fight that gets him brought before the judge was not his fault. Meanwhile, we grow to love him for the affection and fatherly caring he demonstrates for his mute son.

The complexity in his character is revealed, however, in his desperate wish to find a medical remedy that will restore the boy’s voice. And he makes a serious error in judgment by selling his son’s dog without the boy’s knowledge. We understand his dilemma, especially as he sees the youngster being bullied by other boys who mock him for his disability and rough him up.

If you have any tender feelings, the relationship between father and son in the film touches home often, especially when the boy discovers what his father has done. The scene where he finds his voice as he saves his father from being shot is predictable, and you may well have heard grateful sobs in the theater when the film was shown in 1958, but it does not spoil the film, which has honestly earned the lion’s share of its sentiment.

Cast. What lifts the film above the ordinary is the excellent casting of Olivia de Havilland, who makes of her single-woman homesteader a three-dimensional character with a range of emotions that are portrayed without clichés or reaching for predictable stereotypes. Another plausible performance is turned in by Dean Jagger, whose villainous character is softened in unexpected ways (including the loss of one arm) as he tries inexpertly to manage his two troublemaking sons.

Besides a youthful Harry Dean Stanton, there are brief appearances by John Carradine as a traveling salesman, Henry Hull as the Judge, and James Westerfield as the dog breeder who wants the Ladds’ dog.

The film also benefits from fine cinematography, which often demonstrates the old definition of the craft as painting with light. Shadow and light are often dramatically at play as when we see a character exit a room off camera, their silhouette merging with the shadow of an opening and closing door cast against a back wall. In exteriors, we sometimes see a distant character standing alone among the carefully arranged elements of the composition.

Wrapping up. The film was shot in Technicolor on location in Cedar City, Utah. Much of the credit for the film must go to director Michael Curtiz, surely best known for his film Casablanca (1942). Over a long career in Hollywood, he was responsible for several other westerns: Dodge City (1940), Virginia City (1940), Santa Fe Trail (1940), The Hangman (1959), and The Comancheros (1961).

The screenplay was by Joseph Petracca, based on a story by James Edward Grant, who provided scripts for several other westerns: Angel and the Badman (1947), Hondo (1953), The Sheepman (1958), The Alamo (1960), The Comancheros (1961), and McLintock! (1963). Though not notably remembered as an actress in westerns, Olivia de Havilland had previously co-starred in Santa Fe Trail with Errol Flynn and Ronald Reagan.

The Proud Rebel is currently available online at youtube and amazon instant video and on DVD at amazon and Barnes&Noble. For more Overlooked movies and TV, click over to Todd Mason’s blog, Sweet Freedom.
Tweet

Coming up: Sam Brown, The Crime of Coy Bell