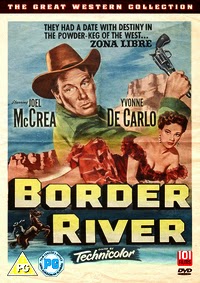 Of his more than 90 films over a long career, Joel McCrea was an established cowboy star of the 1940s and 1950s, appearing in numerous westerns like this one. Usually an affable but thoughtful presence on screen, he rarely departed from his established persona as a decent, likable, honorable man. We find him portraying such characters in two of his better-known westerns, The Virginian (1946) and Four Faces West (1948), both based on popular and well-written novels.

In some films, he was called upon to portray admirably regarded men from Old West history: William Cody in Buffalo Bill (1944), Wyatt Earp in Wichita (1955), Sam Houston in The First Texan (1956), and Bat Masterson in The Gunfight at Dodge City (1959).

Occasionally, we find him playing against type, as in Fort Massacre (1958), where he portrays a military officer with what seems to be a case of battle fatigue affecting his judgment. Border River is another example—and an interesting one—where he and five other men have robbed a bank in Denver of $2 million in gold bullion to buy guns for the Confederacy in the last year of the Civil War.

Claiming to hold to an idealism that keeps him loyal to the South, he turns in a performance as a man willing to lie, cheat, and betray the trust of others to complete his mission. And he remains undeterred, though others all tell him the Rebellion is a lost cause and arming Confederate soldiers will only extend the war long enough for more of them to be killed.

Plot. We first meet McCrea as he crosses the Rio Grande into Mexico, pursued by troops of Union soldiers. Shot off his horse, he is pulled from the river by soldados under the command of a self-styled Mexican general (Pedro Amandaríz) in rebellion himself in the revolution against Maximillian.

He has laid claim to a chunk of land on the Mexico side of the border and declared it a zona libre, where outlaws, fugitives, and men with business to transact are free to come and go as long as they pay for protection. The general, we learn, takes 20% of any commercial transaction, legal or otherwise, and stands to profit handsomely from an exchange of $2 million for guns.

He also has taken a proprietary interest in the owner of a gambling saloon (Yvonne De Carlo), who doesn’t welcome his attentions. She’s a tough-minded realist and has long given up any pretense of holding to political ideals. She has lost a father and a brother in the revolution. All she hopes to gain at this point in her life is money. If she had $2 million, she tells McCrea  she would go to Europe and buy a castle.


She’s also not altogether taken with McCrea  despite the moves he attempts to make on her. Nice talk and kisses don’t melt her cold resolve or self-interest. Amandaríz gets the same aloof treatment from her. A gift of expensive jewelry produces not a hint of reciprocity.

Like many a western, Border River rather fails the Bechdel test, which calls for a work of fiction to have at least two named women characters, who have a conversation together about something other than a man. Besides De Carlo, there's a cast credit for an Erika Nordin, who is glimpsed in one scene but speaks no lines, as if she and her role were a casualty of the editing table. Meanwhile, De Carlo, as a formidable female, gets to wear a glamorous wardrobe.

Action. The film has several well choreographed fist fights, with McCrea's character holding his own against greedy men trying to find where he’s hidden the gold so they can get their hands on it. Exchanges of gunfire and a thrown knife produce several casualties.

A stereotypical quicksand scene is worked into the plot so that first a frightened horse and later McRae’s mud-caked stunt double are pulled to safety from its depths. De Carlo does the pulling for McCrea’s character, after the general has disappeared under the surface.

[Quicksand, by the way, despite Hollywood's portrayal of it, does not suck victims under its surface. Sand being denser than water, their buoyancy can keep man or animal afloat, where they may be imperiled instead by dehydration, hypothermia, predators, or tides.]

Style. Shot in Technicolor on location in Moab, Utah, along the Colorado River, the 80-minute film has a handsome visual style. The street and saloon scenes look lived in and do not skimp on details, and the sound design is nicely realistic.

Much of the film takes place at night, in darkened streets and rooms. The result has a noirish feel that works well with the general tone of criminality, danger, brutality, and moral lassitude that propel the storyline. At the general’s command a number of men are marched to a wall and executed by firing squad. A German dealer in contraband meets a similar end.

No spoiler here, but the final scene reveals an unexpected twist viewers may want to see twice. My reading of it is that it prevents leaving McCrea s character as the coldly motivated man he has professed himself to be throughout the film.

Wrapping up. Border River was directed by veteran director George Sherman, whose many screen credits include 45 B-westerns made during the years 1937-1942. He is also remembered for the John Wayne western Big Jake (1971) and the Fess Parker remake of Smoky (1966), based on Will James’ novel.

Mexican-American actor Pedro Amandaríz had a long career, with many Spanish-language films. He is said to have been known as the Clark Gable of Mexico. In Hollywood, he is remembered for his roles in 3 Godfathers (1948), Fort Apache (1945), and The Wonderful Country (1959).

Yvonne De Carlo appeared in numerous westerns, including the title role of Calamity Jane in Calamity Jane and Sam Bass (1949). Members of the network TV generation will recall her as Lily Munster in all 71 episodes of the series The Munsters (1964-1966). The screenplay was by William Sackheim, whose co-writer, Louis Stevens wrote several westerns, Massacre River (1949), The Cimarron Kid (1952), Horizons West (1952), and Gun Duel in Durango (1957).

Border River is currently available online at youtube and on DVD at amazon. For more Overlooked movies and TV, click over to Todd Mason’s blog, Sweet Freedom.