Richard Prosch, One Against a Gun Horde 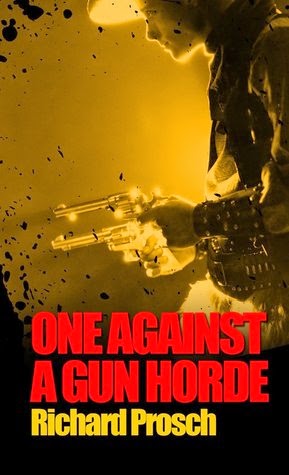 A complaint I have about the traditional western is that they are often humorless. They take place in a kill-or-be-killed world where every action taken and every word spoken are typically dead serious. You won’t find this to be true in the cowboy western at its beginnings. Owen Wister found room for humor in his fiction, both humor and comic irony, even while his stories could take up darker turns of plot, like hanging horse thieves, cruelty to animals, and gun duels at sundown.

There is comedy in other western writers of the time, too, notably the Wolfville stories of Alfred Henry Lewis, the fiction of Emerson Hough (Hearts Desire, 1905), Henry Wallace Phillips (Red Saunders, 1902) and B. M. Bower (Chip of the Flying U, 1906). Clarence Mulford, with his Hopalong Cassidy stories even finds fun in the shoot-em-up West, where gunfire and death are the norm on page after page.

Zane Grey did a lot to change all this. I cannot speak for all his many novels, but of the ones I’ve read and reviewed here they were of the dead serious variety, lacking anything that would coax a chuckle from the reader. Melodrama prevails instead. It’s hero versus villain until one of them must die.

Given Grey’s phenomenal popular success as a writer of westerns you can argue that he had hit upon a formula that was exactly what readers wanted—a humorless one—though I would question whether Grey actually had the gift for humor. And humor is a gift. Louis L’Amour has had his many fans, but you can also find him following in that same mold with stories set in the West that capitalize on Grey’s dead serious portrayal of it.

All this is prelude to my thoughts on Richard Prosch’s new story collection, One Against a Gun Horde. Prosch sets his stories in the same Old West of Grey and L’Amour, but his light comic touch enlivens it in a way that’s fresh and welcome.

The best example is the title story, where reality and fiction bump into each other with comic results that reflect on western storytelling all the way back to Ned Buntline and the dime novel. Prosch has particular fun with the possibilities of irony. “What’s irony?” someone asks his hapless hero in one of the stories. “Dumb luck” is his reply, though he has yet to discover that his luck is about to run out.

Western writer John Nesbitt, says all this much better in his introduction to the book, so I won’t repeat him. What I will add is that Prosch does us all a favor by loosening the hold that the traditional sober-sided western has on the imagination of those today who would write it and read it. His stories remind us that humor mixes just fine with what otherwise seems deadly serious. One in fact heightens our enjoyment of the other.

One Against a Gun Horde is currently available for kindle at amazon.