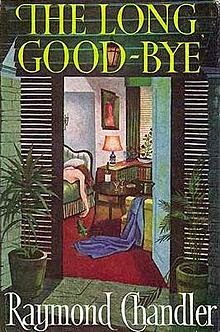 I’m tempted to write this as a review of a western novel. There are so many threads of connection with the themes of earlier frontier fiction. It even has a county sheriff in it. Set in Los Angeles, circa 1950, it echoes a frequent complaint about the West, that its promise has been betrayed by a get-rich-quick mentality and the hedonistic, materialistic culture it fosters.

Private investigator Philip Marlowe is the last of a dying breed, living by a code of conduct that has him making personal sacrifices for people he respects and unwilling to charge them a fee for his services. Like Monte Walsh, the aging cowboy in Jack Schaeffer’s novel of the same name, he refuses to yield to the forces of change, which have meant the death of a way of life based on honorable values.

Plot. One of those values is the trust to be placed in another man’s friendship, which means doing an unusual favor, no questions asked. Which is how the novel begins, as Marlowe agrees to drive an acquaintance, Terry Lennox, to catch a plane in Tijuana.

Before long, Marlowe becomes far too intimately embroiled in a murder, as the body of Mrs. Lennox turns up quite gruesomely dead. And soon, for reasons he will eventually discover, he is being retained by a book publisher to babysit a novelist, Roger Wade, whose heavy drinking is preventing him from completing the draft of his next bestseller.

Character. Bumping up against the rich and powerful, whether a wealthy owner of a newspaper or racketeers with intimidating thugs to do their dirty work, Marlowe is constantly the object of scorn for his lowly profession and his relative poverty. Whether from cops or thugs, which are hard to tell apart, he rarely gets any respect. Before we are long into the novel, he’s doing jail time, as he refuses to cooperate with police efforts to locate Lennox.

Questioned about his ethics, which seem to keep him broke and never far enough out of trouble, he explains to a friendly cop, “I’m a romantic, Bernie. I hear voices crying in the night and I go see what’s the matter. You don’t make a dime that way.”

Finally, a mournful sadness underlies Marlowe’s perspective that leaves him “hollow and empty as the spaces between the stars.” Pouring himself yet another drink, he considers the mean and angry streets of LA:

Out there in the night of a thousand crimes people were dying, being maimed, cut by flying glass, crushed against steering wheels or under heavy tires. People were being beaten, robbed, strangled, raped, and murdered. People were hungry, sick; bored, desperate with loneliness or remorse or fear, angry, cruel, feverish, shaken by sobs, A city no worse than others, a city rich and vigorous and full of pride, a city lost and beaten and full of emptiness.

Then he claims (unconvincingly) not to care, finishes his drink, and goes to bed.

Style. As the storyline slowly unreels, and complications pile upon complications, you read Chandler for the pleasure to be taken in the attitude Marlowe strikes toward the sordid world he is forced to live in. Calling it “hardboiled” over-simplifies it. There’s a depth of sensibility that comes out in literary allusions (T. S. Eliot, Flaubert, F. Scott Fitzgerald) and a turn of phrase that would be at home in a Dorothy Parker story: “He was a guy who talked with commas, like a heavy novel.”

There are long digressions on a variety of subjects. Many turn on jaundiced views of capitalism: “That’s the difference between crime and capital,” someone observes. “For business you gotta have capital. Sometimes I think it’s the only difference.” And you can be reminded that many earlier writers of the West, e.g., Jack London, were committed Socialists.

Remembering that Chandler was writing at the time of Joe McCarthy, HUAC, and the Hollywood blacklist, it’s not a surprise to find one of his characters berating big money and big power. “You sound like a Red,” Marlowe says, which gets this reply:

“I wouldn’t know,” he said contemptuously, “I ain’t been investigated yet.”

For Chandler, there are no rapturous descriptions of the arid landscape. Like other western writers before him, he finds it oppressive:

The stretch of broken-paved road from the highway to the curve of the hill was dancing in the noon heat and the scrub that dotted the parched land on both sides of it was flour-white with granite dust by this time. The weedy smell was almost nauseating. A thin hot acrid breeze was blowing.

The man-made environment has produced its own miseries:

The weather was hot and sticky and the acid sting of the smog had crept as far west as Beverly Hills. From the top of Mulholland Drive you could see it leveled out all over the city like a ground mist. When you were in it you could taste it and smell it and it made your eyes smart.

Wrapping up. The Long Goodbye was one of Chandler’s last novels, and it won him an Edgar Award from the Mystery Writers of America. Following a career as an executive in the oil industry, he had turned to writing detective fiction in his 40s, his stories seeing print during the 1930s in Black Mask. A series of Philip Marlowe novels began with The Maltese Falcon in 1939. He also worked as a screenwriter, notably with Billy Wilder in an adaptation of Double Indemnity (1944).

The Long Goodbye was made into a Robert Altman film with Elliott Gould as Philip Marlowe in 1973. Here is the opening sequence:

The Long Goodbye is currently available in print, audio, and ebook formats at amazon, Barnes&Noble, and AbeBooks. For more of Friday’s Forgotten Books, click over to PattiAbbott’s blog.