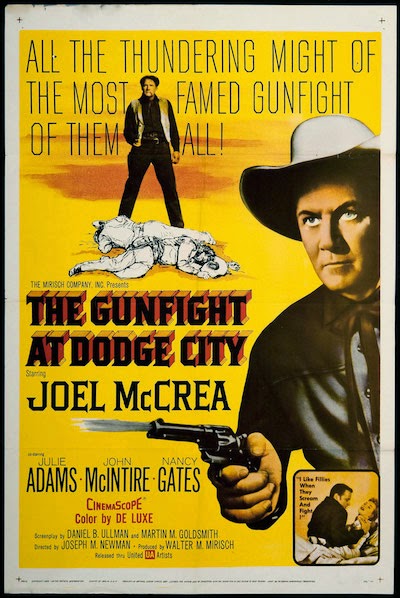 History remembers Bat Masterson as a buffalo hunter, U S. marshal, and Army scout, gambler, gunfighter, frontier lawman, and in later years as a newspaper columnist for the New York Morning Telegraph. The movies and TV remember him somewhat differently, though this western with Joel McCrea as Bat actually works in some factual details from his years in the Old West. Still, the difference between the two Bats is well represented by photos of both. You just have to look at their hats (see below).

The Gunfight at Dodge City parallels Bat’s time in the infamous cow town of the same name, during the years 1877 – 1879. There he joined a brother, Ed Masterson, who was town marshal.

Plot. The movie takes those few details and spins a story that casts Bat as a reluctant champion of justice against a corrupt sheriff (Don Haggerty) and his gang of deputized thugs, who run Dodge City and kill anyone who interferes with them.

McCrea partners with the widow (Nancy Gates) of an uncooperative saloon owner the gang has removed from among the living. Reopening the saloon, he hires on the town doctor (John McIntire) as a card dealer, happy to have some diversion from patching up cowboys with accidental gunshot wounds from the weekly Saturday night hurrah in the streets.

Running as a reform candidate against Haggerty for county sheriff, Ed Masterson (Harry Lauter) is shot dead by an unknown assailant, and McCrea is persuaded to take his place on the ticket. Elected by a grateful citizenry, he gets unruly cowboys in line by cracking heads with his gun barrel and threatening to shoot anyone who still wants to run riot. His method brings to mind the brand of law enforcement usually associated with Wyatt Earp.

As the story unfolds, complications multiply, none of them having to do with historical facts, though they would suffice. Bat was not all that careful about the company he kept or how he used public office.

Romance. With a nod to legend, if not history, the film begins with a flashback to a shooting in which Bat kills an Army sergeant who draws on him in a dispute over a girl. And the screenwriters quickly establish him as good with a gun and a ladies man. Besides the attractive widow and business partner in Dodge City, Bat enjoys the company of a preacher’s daughter (Julie Adams). Betrothed to Bat’s brother, Ed, before he is killed, she is understandably taken aback by Bat’s attentions. She admits to being afraid of him.

Long story short, Gates finally makes known what’s long been obvious to us—Bat has stolen her heart. Unable to keep him from his final gun duel with Haggerty, she hears him deliver the usual reason why a western hero does not run from a gunfight. Not running, McCrea tells her, is the difference between a rabbit and a man. By this time they have locked lips and, when it’s the other man who dies, McCrea is surrounded again by grateful citizens, and he gets his new sweetheart, too.

Wrapping up. The film was shot in Cinemascope and Technicolor, and was handsomely produced using Melody Ranch as a stand-in for Dodge City. Working in a variety of genres including film noir and sci-fi, director Joseph M. Newman is also remembered for another Joel McCrea western, Fort Massacre (1958), as well as The Outcasts of Poker Flat, Pony Soldier, and Red Skies of Montana, all of them in 1952.

John McIntire is particularly enjoyable in the film as the town doctor and friend of Bat. In 1959 he had already appeared as a continuing character in TV’s cop drama, Naked City. In a screen career that included roles in many westerns, he continued on TV for long runs of Wagon Train (1959 – 1965) and The Virginian (1967 – 1970).

The screenwriters were Martin Goldsmith (Fort Massacre) and Dan Ullman, whose numerous writing credits for film and TV included many westerns, such as Good Day For a Hanging (1959), reviewed here a while ago.

The Gunfight at Dodge City is currently available online at youtube, and on DVD at amazon and Barnes&Noble. For more Overlooked movies and TV, click over to Todd Mason’s blog, Sweet Freedom.
Tweet