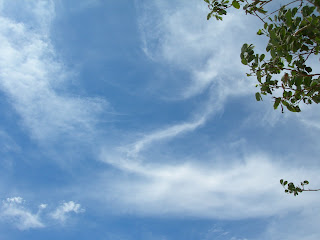 Goodbye, summer. This pic of the desert sky was taken on August 1 from my side yard. It will be one of my memories of the summer that was. Today I’m looking back over the last three months as I started this blog.

In that time I’ve become acquainted with many of you through your posts, your fiction, and your pictures. I’ve enjoyed your enthusiasm for writing and storytelling and the introduction to the world of pulps – which I knew almost nothing about until I read Laurie’s book about her grandfather back in May.
That book, in fact, was what got me here in the first place. I came across it browsing through the LA public library’s online catalog. And, lo, there was even a copy of it on the shelf of my local branch. Google then led me to Laurie’s blog as the summer began. Then, as if it had been waiting to happen, there I was starting Buddies in the Saddle.
Three months later, this is a big thank you to everybody who welcomed me here. It feels sometimes like having joined a fraternity – without the hazing and the beer, of course, but happily coed and communal.
This blog started out as daily comments about the cowboy West as I’ve found it in books and movies. It has evolved into something I didn’t expect.
During the summer, I learned there were not three or four but many short story writers and novelists writing “westerns” in the first years of the last century. It’s easy to see them as working with that same burst of enthusiasm for storytelling that a visitor can feel here among all of you 100 years later. The prospect of getting one’s arms around all that wild and woolly creative activity began to have an irresistible appeal for me.
Then a chance remark by one of you commenting on a post of mine was the jolt that got the penny to fall in the slot. I realized that these blog entries were becoming the early rough drafts of what wants to be a book.
So I’m committing here today to that objective. It’s going to be a big job, and it is going to compete with the other big job I have, teaching writing to college students. But as I add to this blog, you’ll know I’m making progress.
Thanks, again, to everyone who has helped this whole project come into being. It has been fun so far, and I hope some of that pleasure comes across in my posts here for you to enjoy as well.
Coming up: O. Henry's Heart of the West
Posted by Ron Scheer at 7:48 AM