More about Bertrand Sinclair’s 1926 novel Wild West. Today we are looking at the role of romance in the story and the portrayal of cowboy life on the open range. 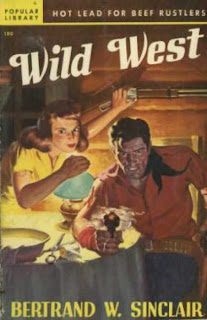 Romance. Instead of male companionship, what Sinclair offers his hero Tyler is the less certain support of a romantic interest. In Raw Gold, romance was hardly a long suit for Sinclair. And in 1926 his romancing cowboy is still an uncomfortable fit with the rest of the story.
When we first meet Tyler, he has a kissing and hugging acquaintance with his boss’s daughter, Ivy. Almost from the start, it’s hard to like her. She’s a clinger (and aptly named) and also emotionally volatile, ready to fall into a jealous fit at the drop of a hat. Manipulative, she tries to play the villainous Steele against Tyler. You wonder how Tyler has the patience to put up with her. Dane Coolidge’s hero has similar female problems in Man From Wyoming. Could be that ranchers’ daughters are thin on the ground, and a working cowboy takes whatever he can get.
Sutherland’s daughter May also takes an interest in our young hero, but in a wait-and-see, almost platonic way. You like her because she’s independent and intelligent, not in a big rush to get hitched to a man. Tyler realizes that he likes her, too, but is promised to this clinger Ivy. So he’s got himself a situation with a good set of conflicting feelings going. Meanwhile, you’re looking at the options and thinking, this should be a no-brainer.
You’re not going to read this book anyway, so I won’t bother with a spoiler alert. While Tyler is off feeling miserable in Seattle, Ivy is seduced, abandoned and “in trouble” thanks to Steele. By this time, he and May have become an item. And by the end of the novel, they seem to make a good match.
But romance still seems shoe-horned into the more compelling central story. It’s nice that our hero gets to indulge a few warm feelings about a girl now and then. And he can get his back up when Steele literally steals Ivy away. But romance remains mostly window dressing in the novel. As it draws attention to itself, it seems more an intrusion than added value.
The cowboy West. I got into this whole business of reading these post-Virginian novels from an interest in the actual rather than mythical cowboy. Sinclair’s knowledge of open range ranching and being a working cowboy makes this an appealing read for me. Details drawn from first-hand experience of the cowboy West play a part in the plotting, the characterization, and the realism.
He describes the little town of Big Sandy, “a huddle of unpainted buildings” in a “great, gray stretch of sagebrush” (p. 29). He notes how as the autumn weather turns colder, cowboys “grumble and wipe the hoar frost from the seats of their saddles before mounting” (p. 78).
A dance held in a schoolhouse brings together cowboys and local rangefolk. Even as the plot moves forward, Sinclair takes time to fully set this scene. We know the fiddler is OK, but not great. Starved for this kind of social gathering, nobody seems to mind. Cowboys compete for the attention of the available dance partners. The women put together a meal of sandwiches and coffee, and the music stops for a while as everyone takes supper.
Outside in the summer night, there are buggies, spring wagons, and horses waiting for the return trip home. Beyond them in the shadows men are sipping from bottles of alcohol. There might be a fistfight, and as the night wears on, some of the women may leave as cowboys get drunker and rowdier. It is dawn before the dance is over. All this has the vividness of lives once lived.

The novel is set in a specific landscape, in Chouteau County, with reference to the Missouri River, the Bear Paw Mountains, and the Little Rockies. The changing seasons are described. The date is not specified, but it’s the end of the open range era, at a time when law enforcement is advanced enough to preclude the need for vigilante justice. Sutherland tells Tyler,
“I don’t want no strangler work on this range, nor shootin’ – unless deputy sheriffs do the shootin’. The gun fighter’s day ought to be over. We got organized law an’ law officers” (p. 229).
In one scene, there’s a mention of heavyweight fighter John L. Sullivan, which would place the story around 1890.
Sinclair and Wister. We’re a quarter of a century after Wister’s The Virginian at this point in western fiction history. The cowboy western is flourishing in Hollywood and on movie screens everywhere. It’s not hard, though, to draw a line from this novel back to Wister.
Starting with the women. Wister’s schoolmarm from Vermont plays one side of the East vs. West conflict of social values debated in Wister. This is a dead issue in Sinclair’s novel, where the women characters in the story are home-grown ranchers’ daughters.
As in Wister, there’s a villain, and gun violence lurks always as a possibility beneath the surface. But the body count in Sinclair’s story remains about the same, and like the hanging of the horse thieves in Wister, the climactic death of Sinclair’s villain happens off-stage.
Maybe most interesting is the complexity of the young hero, who may have a halo at the story’s beginning, but it gradually loses its luster. We never come to dislike him, but there’s not the rapt hero worship that Wister’s narrator bestows on the Virginian.
To the best of my knowledge, Sinclair doesn’t have anything like Wister’s “progressive” agenda either. Robin Tyler is just a young cowboy who happens by chance into knowledge of some ongoing criminal activity and for completely personal reasons wants to see the criminals put away. He doesn’t represent some new order of American character, which was Wister's professed intent. Sinclair was Canadian anyway and probably didn’t much care about that.
Wrap up. For me, this novel was a pleasant surprise. It is two or more leaps beyond the storytelling ability we find in Sinclair’s first novel. Serialized in the pulp magazine Short Stories in January and February 1926 and published in hardcover the same year, it is strongly plotted.
The hero is a complex and unpredictable character, situated always at the center of the action. The story is told in third person rather than first person with the limitations of this point of view we found in the author's first novel, Raw Gold. Secondary characters are rounded out, though Sinclair’s women tend to exist as foils of each other and lack purpose beyond that.
What puts this novel near the top of my list of favorites is the faithful portrayal of cowboy life on the open range. Sinclair’s cowboying days were long behind him when he wrote this novel, and the unfenced range was long a thing of the past. He writes with the richness of a youthful time warmly remembered.
Picture credits:
1) Book cover, coverbrowser.com
2) Buck Jones and Helena D'Algy, The Cowboy and the Countess, 1925, vargen57.unblog.fr
3) Charles Russell, Men of the Open Range, 1923, hoocher.com
4) Montana map, wikimedia.org
5) Little Rockies, jschilling.net
6) Short Stories cover, philsp.com
Coming up: O. Henry’s Heart of the West
Posted by Ron Scheer at 6:07 AM