There are two or three versions of this film, depending on how you count them. According to film historians, it was rushed into theaters by MGM in 1973 before receiving a “fine cut.” In 1988, there was another version put together by Turner Entertainment, meant to restore director Sam Peckinpah’s vision of the film. 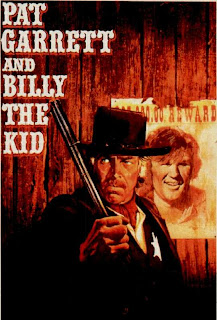 Then 2005 saw yet another attempt to create a definitive version. These last two of the three are currently available on DVD. If you want, you can put them side-by-side on two laptops and let them duke it out.
I saw the original in 1973 and found it unmemorable, so I can’t say today that its vision is much different from the latter two. But it’s probably safe to say that all three attempt to (a) portray the Old West realistically and (b) make an angry statement about corrupt and oppressive power structures. It was, after all, the year of Watergate.
History vs. myth. The film tells a story about Pat Garrett and Billy the Kid that is more or less accurate in some details. Billy’s breakout from the Lincoln County jail follows historical accounts fairly closely. But it shouldn’t be taken as a reenactment.
Neither should Garrett’s shooting of Billy at the end of the film. The writers had read their history, then “dramatized” it. Garrett sits outside the room where Billy has a lovemaking scene, and listens to the sound of what seems to be soul-satisfying sex. Then while Billy goes out to bring back something to eat, Garrett slips inside, where he is waiting when Billy returns.
In real-life that fateful night, Garrett and Billy happened by chance to meet in a darkened room. Garrett was probably surprised. Billy probably never knew what hit him. And he hadn’t come from lovemaking but from the nearby rooms of friends, where he’d shown up for a late night meal.

Mark Lee Gardner’s To Hell on a Fast Horse portrays both men as simply that – men whose lives took them in directions that finally converged. Billy was both a thief and a killer; Garrett as sheriff of Lincoln County had taken on the job of stopping him.
Peckinpah’s film prefers the myth. Not only is his Billy a free spirit at odds with unscrupulous cattlemen, speculators, and businessmen. Garrett is portrayed as corrupted by serving their interests. “It’s just a job,” he says, justifying himself. But to Billy (and Peckinpah, one gathers) he’s a man who has sold out.

The film further stacks the cards against Garrett by making the two men former friends who “rode together” as outlaws. This to my knowledge is a complete fabrication. Billy seldom worked for an honest dollar, and when Garrett became sheriff, the two men had never met. There was no old friendship between them to betray.

Much of the gunplay and violence in the film is Peckinpah’s addition. True, New Mexico was no Sunday school picnic in these years. But he shows both Billy and Garrett in shootings that did not take place. Garrett guns down one of Billy’s friends in a saloon. Billy kills a deputy in a duel outside a trading post, as the proprietor and his family look on.
Later, he finds a Mexican sheepherder being beaten to death and his daughter raped by two of cattleman John Chisum’s cowhands. He shoots both men dead. If this ever happened, it’s not to my knowledge been recorded in history.
And so on.
Peckinpah’s West looks real enough. (The film was shot in Durango.) And the level of violence may not be much of an exaggeration. It’s just that Billy and Garrett weren’t responsible for as much of the violence as Peckinpah suggests. 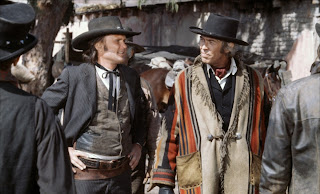 Portrayals. For me, James Coburn as Garrett and Kris Kristofferson as Billy are plausible enough in their roles. Garrett didn’t have Coburn’s silvery hair, and Billy probably looked younger, but if you can forget you’re watching actors on the screen, it works.
From what I’ve read, Coburn’s Garrett is pretty accurate. The man was apparently not all that easy to get along with. He could be ill tempered and the sort who made enemies more easily than friends. The heated exchange with another man that ends with his murder in 1909, as shown in the film, is apparently faithful to history’s memory of him.
The script makes Garrett out to be a loner, though in a scene from one version of the film we see him with his wife. And it’s not a happy marriage. In real life Garrett always spoke well of his wife and spent enough time with her to father eight children. He has descendants today who defend his memory – especially whenever there is talk of giving Billy a posthumous pardon.
It was his responsibilities as a family man that often got him into financial straits. When he took a thankless job like sheriff of Lincoln County, it was because he desperately needed the money. Of course, his losses at the gambling tables were also a factor. 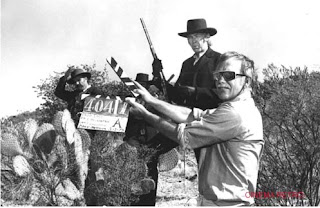 The film portrays Garrett as fairly well to do and able to afford the services of four prostitutes for an entire night. Made in the early 1970s, the film offers an opportunity to fill the screen with all that naked female flesh. It also shows Garrett as gleefully decadent in his sexual appetites. It suggests that he’s unable to enjoy Billy’s more wholesome kind of lovemaking.
Kristofferson’s Billy is another story. The real Billy was reportedly far more playful and charming. He probably had a good deal more of the Irish in him. He loved to party and dance. He was also a braggart and a bluffer and despite his good humor, always potentially vicious. Kristofferson’s Billy is far more benign – as if mellowed out by a prolonged stay in Haight-Ashbury.
Western movies hardly ever fail to have a scene set in a saloon, where men gather to drink whisky. The amount of alcohol consumed in this film goes far beyond convention, but in this regard, Peckinpah’s picture of the West is probably not far from wrong.
Add this all up, and you get an idea of Peckinpah’s agenda, using myth to grind his own axes. We know that he had a hellacious battle with studio execs during the making of this film. Pat Garrett and Billy the Kid is as much about the historical West as it is about Nixon’s America and the counter-culture of the boomer generation.

Today’s audience. I’d be curious what an audience of under-30s would make of this film today. Most would know only a handful of the performers. In 1973, the cast was almost an honor roll of western actors in cameo parts: Chill Wills, Slim Pickens, Katy Jurado, Jack Elam (above), Richard Jaeckel, Jason Robards, Barry Sullivan, Matt Clark, and L. Q. Jones. Other familiar faces were Bob Dylan, singer Rita Coolidge (Kristofferson’s wife at the time), Bruce Dern, Harry Dean Stanton, and Charles Martin Smith.
The familiarity of so many faces keeps reminding an older viewer that this is not only a Hollywood western but self-consciously so. And then there is the novelty of Bob Dylan’s soundtrack, which is nicely done and an underscoring of the mythical dimension of the film. But for an older viewer, it evokes the 1960s as much as the1880s. The verisimilitude of the set design and the costuming and the realism of Peckinpah’s gunfights and bloodshed are often undercut by all this.

Here's a clip showing the opening credits, the shooting of Garrett in 1909, and the meeting of Billy and Pat at Fort Sumner where the story begins. (Warning: Some animal cruelty depicted.)