Clarence E. Mulford (1883-1956) gave us Hopalong Cassidy, a young red-haired cowboy who appears in his earliest work. Mulford, living in New York, had only read about the West when he wrote the first stories that became Bar-20 in 1907. 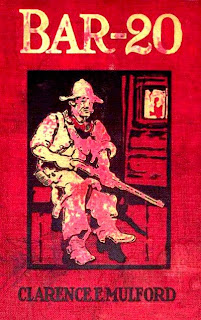 Reading this rambling, strung-together set of adventures, you can see Mulford finding himself as a novelist. The book is a collision of different influences, from dime novels to Owen Wister’s The Virginian and books about cowboying and the actual West.
Getting started. The first half of the book is as poorly organized as a train wreck. There’s not much continuity, and it seems to start over again several times. I’m guessing this is because the chapters began as stand-alone short stories.
It’s also hard to figure out how much disbelief to suspend. Mulford carefully locates the Bar-20 ranch and the nearby town of Buckskin, Texas, near the Pecos River, fifty miles south of the New Mexico border. He describes the physical appearance of the town in some detail.
Then the town is the scene of an exciting but improbable gun battle after one of the Bar-20 cowboys is shot in cold blood by a cowboy from a neighboring ranch, the C-80. The fight goes on all day, with the C-80 boys holed up in the hotel and the Bar-20 boys surrounding them. The Bar-20 punchers are a jocular, practical-joking bunch, and they don’t lose their sense of humor as the bullets fly. 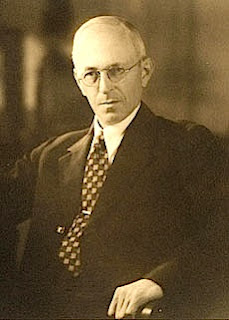 Besides a couple of flesh wounds, the Bar-20 boys have no further casualties, but one by one they kill all the C-80 men. Kind of extreme and unrealistic – wiping out the entire outfit of another ranch.
A short while later, we’re with Bar-20 cowboys on the trail of Indians who’ve stolen some horses. After days of following them, there’s a long shootout in which Hopalong is wounded, and it ends with the deaths of all the Indians. A similar exchange of lead takes place in Santa Fe in a dispute over a mine.
In Mexico, where Hopalong tries without success to pay a call on a señorita from a previous visit, he enters a cantina on his horse and holds several men at gunpoint. Before leaving town, he shoots the sheriff – just winging him to keep the man from using his guns. Weeks later, the two men meet cordially, and the sheriff is too charmed by the young man to arrest him, even though there’s a $500 reward on his head.
Put simply, the separate stories take place in different realms of probability. A reader has to keep adjusting expectations.
Hopalong. There are eight regulars among the Bar-20 outfit. Buck Peters, a man of some years of experience, is the foreman. Next to him is Red Connors, and closest to Red is his “bunkie,” the young (also red-headed), irrepressible Hopalong Cassidy. Hopalong walks with a limp, resulting from a gunshot wound while once saving the life of a sheriff. Don’t mention his limp if you don’t want to get his back up. 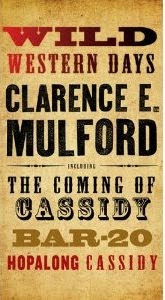 Never referred to as “Hoppy,” the young cowboy is a hard-drinking, cussing, cigarette and cigar smoking son of a gun. He wears the clothes of a working cowboy (no all-black outfit) and lives by what Mulford always refers to as his "Colt’s .45," a weapon he can use faster and more accurately than anyone else.
Hopalong is intensely loyal to his outfit, but he doesn’t adhere strictly to the Code of the West as we’ve been led to understand it. He can be a complainer when he isn’t happy with something, and given a job to do by Buck the foreman, he might give up on it if he thinks he has a better idea. Mulford never calls him on this, and neither does anybody else.
The young man may be able to hold his own with a member of the opposite sex, though in this novel, women are thin on the ground and, when they do show up with their feminine charms, are not to be trusted. Hopalong’s Mexican señorita got married and put on some weight during his absence, and a pretty girl he finds “lost” on a cross-country ride turns out to be a gold-digger. 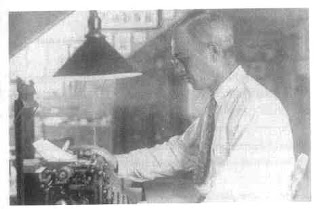 Mulford finds his groove. The novel doesn’t really get its bearings until chapter 16, “Rustlers on the Range.” Here the story settles into a much longer adventure that begins with a description of large scale cattle rustling. The outfits of several ranches finally combine forces to go after what qualifies as organized crime on the open range.
Buck Peters is joined by an old partner from his days in Montana, Frenchy McAllister. Together with Red and Hopalong, he is sent by Buck into the Staked Plains of West Texas to search for the rustlers. The geography at this point gets a little sketchy, as they trek off into what seems to be the White Sands of New Mexico, which is not on the way to the Staked Plains.
Mulford tends to imagine the West on an epic scale and assembles a force of 75 punchers (by the way, they are rarely if ever called “cowboys”) to go after the rustlers. Once they are found, there is a planned attack that goes on for a day or more. Rustlers are shot dead, get trampled by terrified cattle in a corral, and have their cabins set afire. 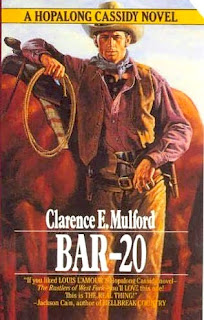 Few if any escape, and of the eight remaining, seven are taken off into the woods to be hanged, and Trendley the leader of the gang is dispatched in a way that is left to our imaginaton. He is turned over to Frenchy McAllister, who has a special reason to put him to death in whatever way suits him. Years ago, Trendley murdered Frenchy’s wife, leaving a nasty note on her body that suggests she had been raped as well.
This whole rustling episode fills seven chapters and provides a kind of climax for the novel. It gathers together several threads of action and shows Mulford able to handle a longer narrative than the short stories cobbled together during the first 15 chapters. There is much less here, thankfully, of the scenes of jocularity among the cowboys. Mulford seems to delight in their playful joshing of each other and rough practical jokes, but after a while a reader can lose interest.
The closing chapters are a return to the short story form, as Hopalong goes to a neighboring town for a “carnival,” where he competes in a shooting competition with a villain, Tex Ewalt. Mulford portrays this man in every off-putting and despicable way. Expecting more bloodshed, a reader will be surprised by the ending of this story, which is a remarkable display of Hopalong’s shooting dexterity. His opponent is put to shame, and that’s that.
More next time.
Further reading:
James Reasoner on Mulford’s Hopalong novels
Picture credits:
1) Mulford portrait, nndb.com
2) Mulford at typewriter, sherlockiana.dk
3) Book covers: Bar-20, fantasticfiction.co.uk
Coming up: Review of Chip of the Flying U by E. M. Bowers
Posted by Ron Scheer at 6:53 AM