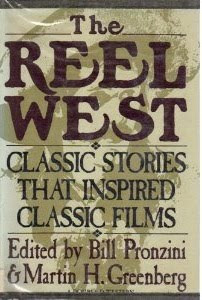 Best proof yet that you can’t tell much about a story from the movie based on it – read Bill Pronzini and Martin H. Greenberg’s collections of western stories The Reel West. This book (there was a series of them) came up recently in an online discussion about movie adaptations, and as this has long been an interest of mine, I had to have a look.

Pronzini and Greenberg found ten stories by writers from Bret Harte to Jack Schaefer, and I’m going to compare them to the screen versions of five that I’ve seen. The similarities and differences say a lot about the creative process for writers and filmmakers.
High Noon. This classic western from the 1950s was based on a story by John M. Cunningham called “The Tin Star,” originally published December 6, 1947, in Collier’s. It’s easy to forget the movie as you read it, since they’re so utterly different.
John Cunningham (1915-2002), served in the Pacific during WWII, so he was part of that wave of returning GIs who’d not only survived the war but had grown up during the Great Depression. No small achievement for a generation.
For me, that experience is text and subtext of so much of the film and literature that came out of that period, 1945-1955. “The Tin Star” has got to be another example.
The premise of both story and film is the same. A frontier-town sheriff chooses to stay in his job and confront some bad guys who come to town and are gunning for him. The last of them is arriving by train. The entire story takes place in an hour or so. 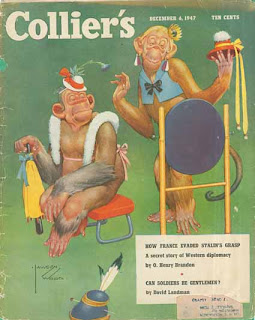 The situation for this sheriff, however, is that he is ready for retirement. His hands are crippled with arthritis and he can barely handle a gun. A younger deputy sees that law enforcement is a lousy, low-paying, high-risk job with no future, but for the time being, he sticks by the sheriff.
In brief, there’s a protracted gunfight between the outlaws and the sheriff and his deputy. The outlaws are killed, the deputy takes a shot that breaks his leg, and the sheriff stops at least three rounds and dies, the last of them as he protectively throws himself over the body of the fallen deputy.
It is a war-like firefight between foot soldiers, played out on the dusty streets of a tiny western town. In the actions of the sheriff, the young deputy comes to understand that there is honor in risking one’s life to do a job that lesser men would not do. Cunningham’s story bestows a dignity on the unsung heroics of uncommon men just doing their duty.
The film tells the same story, but in a different way. The dramatis personae expands to include roles for Grace Kelly, Katy Jurado, and Lloyd Bridges. And it emphasizes how the town turns against the sheriff, offering no help. One big difference: Gary Cooper’s sheriff not only marries in the film but lives to ride off with his new bride.
Which is fine. But read the story sometime. It is tightly crafted and told so compactly that you miss half of it the first time through (at least I did). A second and third read yields precisely chosen and layered details. It’s a lesson in storytelling for any writer. 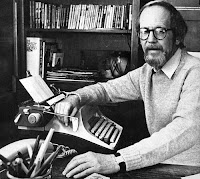 3:10 to Yuma. Elmore Leonard’s terrific “Three-Ten to Yuma,” published in March 1953 in Dime Western Magazine, makes an interesting comparison to Cunningham’s “The Tin Star.” They have so many elements in common, yet they are such individually memorable stories.
Again, the main character is a lawman, this time a deputy marshal from Bisbee, in southeastern Arizona. He’s up against a gang of outlaws, and the entire story takes place in less than a day while waiting in town for a train to arrive. The theme, too, is the same – the honor owed to a man who risks his life to keep the peace, though he’s not paid what the job is worth.
The big difference is that Leonard’s lawman has his adversary already at gunpoint. Instead of a gunfight which ends in the demise of the outlaws and the lawman, both men are still alive at the end, and with a minimum of bloodshed. Much of the “action” of the story is confined to a hotel room, where the outlaw tries to find the price the lawman is willing to accept to give him his freedom. 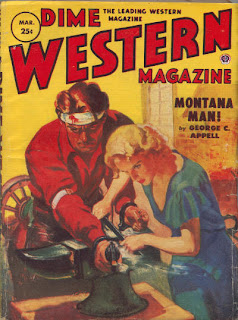 But the lawman literally sticks to his guns. It’s a premise that’s brilliant in its simplicity, and the resulting story is told with an admirable economy. Not a word wasted. It’s also a more upbeat ending, as if the trauma of the war years was finally lifting.
The 1957 film version of this story sticks closest to the short story in both spirit and substance. While Van Heflin and Glenn Ford are both older than the young men in the story, the film opens up to include the deputy’s family and the stagecoach robbery and killing that lead to the outlaw’s prison sentence at Yuma. There’s also a romantic interlude between the outlaw and a barmaid.

The 2007 version is more cynical, the stagecoach robbery more spectacular and bloody, the gun battle during the run to the train a withering fusillade as the bodies pile up and up. At the end, the gang has been wiped out, and the deputy is dying. Only the outlaw is left alive – plus the deputy’s son, who has learned to admire his father’s courage.
In the remake, Hollywood turns Leonard’s upbeat ending into the downbeat one that Cunningham wrote for “The Tin Star.” The hero is killed, but his son will follow in the footsteps of his father, in the way that Cunningham’s wounded deputy chooses to follow the example of the dying marshal. 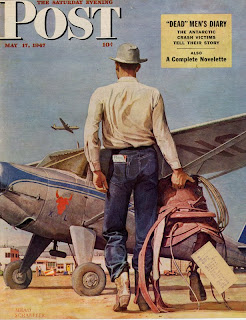 Fort Apache. Now here’s another post-war story from 1947, written by James Warner Bellah (1899-1976) and published in The Saturday Evening Post. Though “Massacre” takes place on the frontier, its setting in the U.S. cavalry invites a connection for any contemporary reader who has served in the military.

So much literature about the military is written by men who have served but write about it from a distance – looking back from the civilian world they’ve returned to (like Tim O’Brien’s The Things We Carried). But Bellah’s story retains a military frame of reference. His characters are immersed in a tightly ordered world of rank, tradition, and chain of command. You have to enter this world for the story to work. However, there’s a twist, which makes the narrator’s point of view full of irony. It involves the falsifying of a man’s military record “for the good of the service.”
Here we have Major Thursday, the embittered former Civil War general, attempting to regain his lost rank by waging a foolhardy attack on a better armed and far larger army of Apaches. Like Custer, he dies along with his slaughtered troops.
The story is told from the point of view of a young lieutenant, a career man, who keeps a secret about Thursday’s death for the rest of his life. While Thursday is remembered as a man who died honorably, we discover that he in fact committed suicide. 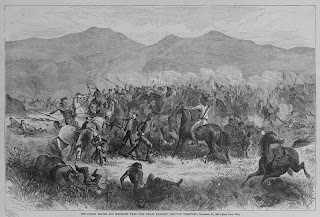 John Ford’s version of the story bears a resemblance to Custer at the Little Bighorn. However, Bellah is said to have drawn material for his story from an actual battle known as the Fetterman Massacre that took place in Wyoming in 1866 (at left, artist’s rendering from Harper’s Weekly, 23 March 1867; click here for full size).
In that battle, 81 officers and men, including two civilians, were wiped up by a force of as many as 3,000 Sioux and Ogalala. The controversy around the events of that day makes an interesting comparison to Bellah’s story. A striking detail is that the Indians honored the body of the bugler, for apparently fighting to his death with no weapon but his bugle.
History’s account of all that happened is full of ambiguities, and Bellah lets the reader decide what’s more important, myth or truth. To get a sense of his own opinion, you find yourself reading the story over again to pick up the nuances that you missed with a first quick reading. 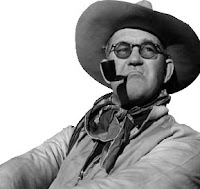 As an aside here, readers in the 1940s must have been much better attuned to this sort of writing. I’m used to skimming for the gist of something when I’m in a hurry, and the stories by both Cunningham and Bellah are too densely written for that. Bellah in particular writes in a high style, like he’s intoning. It’s appropriate to a story about a massacre, but you have to slow down and let it work on you.
John Ford (at right) took the outline of this story and the two central characters and fleshed them out with a dozen other characters and various subplots. He also altered the death of Thursday, so his demise is not so disreputable. Both endings are ironic, but the ironies have a different effect.
Next time: Jack Schaeffer’s “Jeremy Rodock” and Dorothy Johnson’s “The Man Who Shot Liberty Valance”
Further reading:
Elmore Leonard website
Account of the Fetterman Massacre at wikipedia
Picture credits:
1) Collier’s cover, 6 Dec 1947, gono.com
2) Elmore Leonard, detnews.com
3) Dime Western cover, March 1953, philsp.com

4) Saturday Evening Post cover, 17 May 1947, gono.com
5) Fetterman massacre, wikimedia.org
Coming up: Review of Richard Wheeler’s An Obituary for Major Reno and an interview with the author
Posted by Ron Scheer at 8:15 AM