Last time I posted a review of An Obituary for Major Reno by Richard Wheeler, about a real-life commander of troops at the  Battle of Little Bighorn. He has graciously agreed to answer a few questions about the writing of that novel, and I am pleased to yield this space to him today. 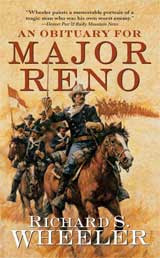 Your portrayal of the novelist Whittaker in the novel is far from sympathetic. To what extent do you find yourself in his shoes as you go about writing historical fiction?
Frederick Whittaker was an actual person, a dime novelist who became obsessed with vindicating Colonel Custer and criminalizing Major Reno. He grew increasingly demented, and probably paranoid, and ultimately tripped on his cane and shot himself with the revolver that he was carrying. You will find Whittaker's life ably portrayed by historian Robert Utley in Custer and the Great Controversy.
Some novelists have axes to grind, but I am not among them. My whole approach is the opposite of Emile Zola's furious J’accuse! directed toward the president of France in 1898. I enjoy humanizing controversial historical figures, depicting their strengths and weaknesses in what I hope will be a balanced and perceptive portrait. I tried to do that with Major Reno. I've treated Buffalo Bill Cody the same way, and Irish rebel Thomas Francis Meagher in that fashion, as well as Wyatt Earp and Bat Masterson and Meriwether Lewis.
You give a warts-and-all picture of Major Reno. Could you describe what it was like for you as a writer working day after day with this character?
Marcus Reno was a bundle of contradictions: he was sometimes honorable, sometimes capable, and sometimes full of crap. The one issue I faced early on was whether he was sufficiently admirable, or at least empathetic, to sustain the interest of my readers. I decided he was. He was an above-average field officer with battlefield commendations. He handled the occupation of New Orleans well. 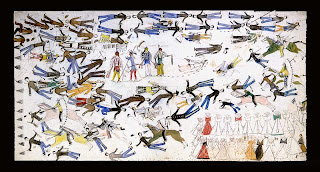 He was also a drunk, had a temper, and was disparaging of other officers. He needed the anchor of a woman in his life, and indeed during his brief marriage he was at his best, but when his beautiful wife died, something died in Reno, and he grew less and less honorable. Sometimes I ached for him; sometimes he ticked me off. But he grew large in my mind, and I continue to regard him as an important figure in our history.
How did you as a storyteller go about deciding what to reveal of Reno's less appealing side?
I decided just to let it all be there; the novel would hide nothing. Death has been kind to Reno. Most of those who look at him now see a flawed but sympathetic man. I have visited his grave several times in the Custer Battlefield National Cemetery, and it is always decorated with flowers, artificial ones in the winter. He is remembered. The families of those soldiers who did not perish at the Little Big Horn have not forgotten him.  And of course he was reburied with honor in the 1960s.
How much of Reno's personality and motivation is part of the record, and how much for you was a matter of filling in the blanks? 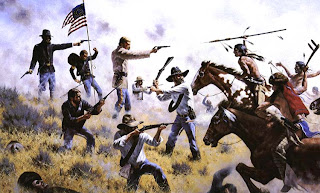 I stayed as close to the record as I could manage, and avoided going out on any sort of limb. I did fill in a little because a novelist dramatizing history needs to.  We are telling a story. It hadn't been noticed that Reno's best years coincided with his marriage, and I made something of that in my novel. I believe my depiction is a valid one.
I see by the acknowledgements that the novel is based on a good deal of research. To what extent as a novelist did you feel you could take liberties with historical fact?
Historical novelists have a certain leeway not permitted historians who have to document and footnote everything they say. I may surprise you by saying that historical novelists are thus able to offer a deeper and truer picture of events than historians, but there is some risk in it. Academic caution is a virtue, and an academic historian cannot speculate or expand upon the material before him. 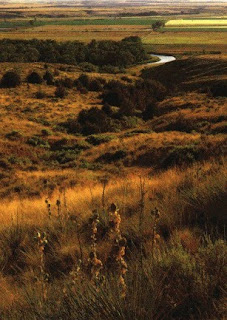 It is worth remembering that an entire collection of research material will, at best, tell only a part of a story, and that even the best-researched history may portray only a fragment of reality. The idea is not to take liberties, but to find reasons, and build them into events and character.
How much were you consciously making a case for exonerating Reno as you wrote, or were you deliberately leaving that kind of judgment up to the reader?
I largely left that to the reader. The story's narrator, working on an obituary, sees all of Reno, and still decides the man deserved a kind remembrance. Obituaries are the most important literature in the English language, and worth close examination. There are some new histories about the battle that parcel out blame rather than loading it on one person or another. These new histories also note that things simply happen, and ought not to be laid at the feet of one or another person. That seems reasonable.
To what extent did your editor contribute to working out these issues?
My splendid editor, Dale L. Walker, is an historian of note himself. He steered me to research material, and asked questions or asked me to support a view. I am deeply indebted to him.
Anything you'd like to add for writers who incorporate people and events from history into their storytelling?
English spoken in other times was radically different from today's vernacular. So is the cultural matrix that existed in other times. I constantly see fictional characters behaving in ways no man or woman of a period would dream of behaving, and speaking in modern terms, or with modern attitudes, that would be alien to historical people. Victorians could not even refer to a woman's legs. They were "limbs."
Richard S. Wheeler is the author of over sixty novels. He is the recipient of five Spur Awards and the Owen Wister Award for Lifetime Achievement in Western literature from the Western Writers of America, Inc. He lives in Livingston, Montana.
Picture credits:
1) Battle of Little Bighorn, Kicking Bear, c1898, nmculturenet.org
2) Custer and men, manataka.org
3) Little Bighorn River, legendsofamerica.com
Coming up: Review of Mark Lee Gardner’s To Hell on a Fast Horse and Sam Peckinpah’s Pat Garrett and Billy the Kid
Posted by Ron Scheer at 6:19 AM