Book: Chip of the Flying U

B. M. (Bertha Muzzy) Bower (1874-1940) is a pistol. Her first novel, Chip of the Flying U (1906) is craftily written, with one eye on her own authentic experience and the other on Owen Wister’s flights of romantic fantasy in The Virginian. 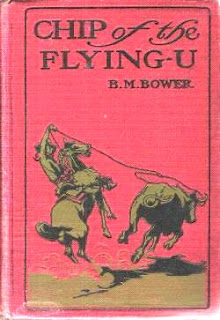 You can tell that she knew ranching and cowpunchers from first-hand experience, living in Montana. The level of specifics is at least a couple degrees more closely observed than Clarence E. Mulford (Bar-20), who had to rely on the books he’d read and his imagination, writing at long distance from New York.
In an opening scene around the table where a half dozen cowboys are eating and talking, you know that Bower has seen and heard scenes like this maybe many times. How the men interact as they express their fears and prejudices about women is sketched in with broad strokes but accurately understood.
She has a great eye for details. When a man indulges his love of syrup poured over biscuits or pinches out the flame of a match after lighting a cigarette, her scenes leap to life. Likewise in the first pages, when a rider’s horse shies at the sight of a letter being waved in the air by another man. And then there’s her description of the bunkhouse, from the misstep her heroine takes coming through the door to her realization that the men don’t sleep in bunks and do read magazines. These moments aren’t there to show off her writer’s credentials. They are almost throwaways, and you know there’s a whole lot more where they came from.
Later on, her main character Chip pitches a magazine across the room when the western story he’s reading gets the details wrong. “I’d put a bounty,” he says, “on all the darn fools that think they can write cowboy stories just because they rode past a round-up once, on a fast train” (pp. 198-199).
Unlike Mulford, whose cowboys are almost indistinguishable from each other, her men are drawn in clear profile. Yes, they are almost caricatures, but you realize that this is the way they see each other, as stereotypes. Bower understands that working men don’t care to know each other any more personally than that.
Sexual politics. Meanwhile, their stereotyping of women is also Bower’s way of raising the whole subject of sexual politics in the West. Della, the woman who arrives at the Flying U, is not a schoolmarm, a spinster, or a shrinking violet and “screamer” as the cowboys predict. She’s a trained physician, and she’s also a crack shot with a rifle, and not above shooting a coyote.
Bower also knows how to introduce sexual tension between two characters. Mulford keeps women at arm’s length in Bar-20. His is a man’s world, period. Wister’s clumsy courtship between the Virginian and Molly strikes sparks only when they’re having an argument. From time to time, there’s a certain amount of mooning back and forth, but you hardly sense that either of them raises each other’s temperature. 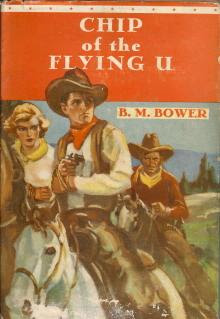 Bower starts stoking that fire from the beginning. There’s Della’s appreciation for Chip’s physical presence in the opening chapters as he meets her at the train and does his best to ignore her as he drives her back to the ranch. We learn through her eyes that he’s a handsome man, with more than enough sex appeal to pique her interest.
Then there’s this remarkable moment when he discovers her snooping around in the bunkhouse. There they are, suddenly alone together, where she’s not supposed to be, and she’s just found a sketch of her that he’s drawn. It’s a situation fraught with awkwardness. Then we are hit by the full emotional impact of the scene. He’s come to get his revolver, and she learns that he’s about to shoot his favorite horse because its leg has been broken.
What happens next is that she persuades him to let her doctor his horse, setting its leg and procuring a stall for it in the barn where it can recover. As they look together at the horse, she sees that Chip is all barely contained raw emotions. Meanwhile, we know that when she slipped his sketch of her into the front of the shirtwaist she’s wearing, he felt a surge of something any reader could tell him was libido.
How Bower layers all this together is nifty. You have to read it.
Ranch romance. I’m not sure I fully understand this term, but I’m going to use it. As the story develops, the central theme in it has to do with how these two different people negotiate their growing desire for each other. 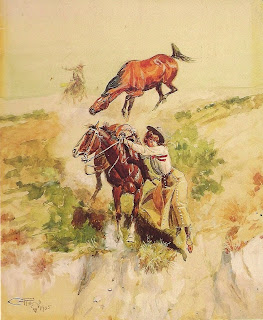 We know what’s afoot as soon as Bower starts throwing obstacles in the way of the romance. Chip learns from the other cowboys that there’s a Dr. Cecil Granthum back in Ohio with whom Della is exchanging letters. Then there’s her rancher brother’s partner, Duncan, who overly enjoys her company. (Illustration from the first edition at left)
He also overhears part of a conversation in which he thinks she is mocking him, when in fact she’s talking about a neighbor’s boisterous children. He is wounded by this and falls into a funk. In affairs of the heart, he's at a decided disadvantage, never having been in love before. In his frustration with her, he finally tries her patience and she gets fed up with him.
This lasts until he falls from a runaway horse and sustains an injury that requires convalescence and throws them together again. Which directly recalls the way that Molly in The Virginain has a change of heart when the Virginian is nearly done in by renegade Indians.
Bower and Wister. This development is not the only echo of Wister’s novel. Della’s arrival from the East mirrors Molly the schoolmarm’s arrival from Vermont. Her journey from the train to the ranch recalls similar journeys in the Vriginian.
There’s a celebratory party at the ranch house in both novels, bringing together neighbors from miles around for food, music, and dancing. Bower even takes Wister’s baby-switching scene and offers an incident with some of the same elements. While the adults are partying, Della enlists Chip’s help in pumping the stomachs of several children who have freely sampled the contents of the medicine cabinet in her office. As in The Virginian several parents go home out of sorts because their children have been meddled with.
While Molly has the Virginian reading the classics, Chip already knows something about them. There’s a misunderstanding when he happens to quote Shakespeare and she seems surprised that he knows the Bard. 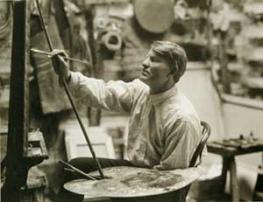 Chip. Bower gives Chip something more in the way of sensibility and refinement than is afforded to the Virginian by Wister. He is gifted as an artist and good at drawing the people and landscapes around him. In this regard he’s like Charlie Russell (at right), the painter from Great Falls who’d once been a cowboy, and who also provided three illustrations for Bower’s book (above left). It’s said that Bower may have had Russell in mind when she created the character.
Finally, she gives Chip an emotional life that we get more than a glimpse of. We know, for instance, that he is all alone in the world and often feels lonely. Wister’s Virginian has his wistful moments, but he’s too self-sufficient to acknowledge this much vulnerability. It may take a woman writer to cut so directly to the tenderest parts of a cowboy’s heart.
She also understands a man’s pride. Laid up with his injuries, Chip gets upset when he hears someone has said he was thrown from his horse. He hadn’t been thrown he insisted. The horse had done a somersault, toppling over onto him. Allowing it to be said that he’d fallen would discount his reputation as an expert horseman.
Meanwhile, she understands what there is that he won’t let himself take pride in – his ability to paint. Lacking confidence, because he’s untrained, he won’t take credit for painting a winter scene of a cow and calf confronted by hungry wolves. And though he stoically lets Della claim it as her own work, as a ruse, it pains him that she does it so easily.
More next time.
Further reading:
Charles Russell Museum
Picture credits:
1) Book covers, amazon.com