At some point a while back these blog entries began to look more and more like book chapters. As the saying goes, if I had more time I’d have written them shorter. 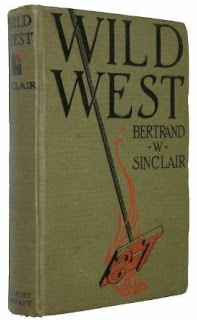 I wrote last week about Canadian novelist Bertrand Sinclair, who burst on the scene in 1908 with Raw Gold. Resembling Wister’s The Virginian (1902) in maybe a few too many ways, it was a little wobbly in places. I was curious how a later Sinclair novel would compare and picked his Wild West, published in 1926.

Before he turned to writing, Sinclair had been a working cowboy around Big Sandy in north central Montana. This novel draws from that experience. His central character is a young cowboy, Robin Tyler, working for a small ranch owner, north of the Missouri River and within sight of the Bear Paws and the Little Rockies. In chapter one, he discovers by chance that the wagon boss of a neighboring rancher is rustling cattle. So the plot is quickly set in motion.
Shining Mark Steele has an MO that takes a while to be unraveled by our hero. Steele, with the help of a partner, is killing mama cows with unbranded calves and then putting his own brand on the calves. In winter they round them up and move them south across the frozen Missouri River to roam free and fatten there, far from their home range.
The brand, meanwhile, is registered to a saloon-keeper in Helena. So there’s no suspicion that Steele is really building a herd for himself from the cattle of his employer and other ranchers. Tyler pieces the whole scheme together. But with only circumstantial evidence, there’s no way to bring charges against Steele. It takes the length of the novel to get the truth out into the open.
While the cattle-rustling plot is common in the pulp and B-western, Sinclair gives it some twists. His villain, Steele, is a smooth operator. As the wagon boss of the biggest rancher in the area, he’s at the top of the local pecking order, and he enjoys his privileges. He’s both contemptuous and contemptible. Animosity between Tyler and Steele builds quickly.
Tyler starts out as a mild-mannered guy who doesn’t carry a gun. But before long he’s acquired a .45 and is practicing his fast draw, with plans to use it on Steele when he’s got a fighting chance. By this time, a partner of Tyler’s is killed as the two men go sleuthing in the Bad Lands, and Steele has moved in on Tyler’s girlfriend.
At the mid-point of the novel there comes a sudden turn when the two men meet in an isolated line camp. In a struggle over a revolver, Steele gets shot. Tyler leaves him for dead and flees by train to Seattle, suddenly a fugitive.
Seattle doesn’t work out. He hates the weather. He hates city life. And instead of trying sunnier Los Angeles, where he might have wound up working as an extra or doing stunts in western movies (I’m making that part up), he decides to go back to Montana and face the music.
The story plays out from there in surprising ways that keep you turning pages. I haven’t yet read enough early western novels to compare this one to, but I found Sinclair’s particular spin on the cattle-rustling plot unpredictable and original.

Cowboy logic. Tyler, meanwhile, is an interesting case. While he’s an honorable guy and in the right, it turns out that he has an anger management problem. He literally sees red a couple times as he confronts Steele, and he shoots off his mouth when it would be wiser to shut up.
The Virginian is painfully deferential to Judge Henry, his employer. But Tyler bristles when he thinks he’s being challenged by Sutherland, the oldest and largest rancher and landowner around Big Sandy.
Fortunately for both Tyler and the story, Sutherland’s temper has an unusually long fuse. He also plays his cards close to his chest. All of which makes him an interesting character. When he doesn’t lose patience with Tyler, it’s because of his ability to see the potential in this cowboy as a top hand, despite his bad manners.
Tyler proves his worth to Sutherland by finally figuring out a way to get the goods on Steele. It’s a risky plan, but he pulls it off. In the couple of years during which the story takes place, he learns a lot of lessons the hard way and grows in self-confidence.
But he’s unlike the heroes you’re likely to come across in a western of the ’00s. (Not sure how else to refer to that decade.) Honorable, yes, with a well developed sense of justice. But stoic, no.
His emotions are likely to leap to the surface. He can break into a chorus of “The Spanish Cavalier” or just whoop it up from an outburst of good feelings. Under the surface, he’s also an angry young man, and his rage can boil up quickly and fiercely. He can knock a man down with a single punch or make threats, daring another man to draw on him. In fact, his taking up a gun is worrisome. He is too impulsive to be carrying a lethal weapon. And he half understands this, wondering if he will die like his father in a gun fight. Yet as he arms himself, he seems to gain his manhood. Therein, perhaps, lies the paradox of the “wild west.”
Tyler is also, for the most part, a loner. Being alone, he is emotionally isolated and often on the defensive. For a time, he is joined by a compatriot, Tex Matthew, an older, wiser cowboy who counsels him. The warmth of their friendship is welcome in a story about a single man against the world.
But when Tex is killed in an ambush, Tyler is left alone again, and you feel that loss along with him. From there to the end, Tyler’s attitude seems to harden into a bitter refusal to trust any man.
Diversity. Not much mention in this novel of other ethnics on the Montana prairie. Only the Sutherland household has a Chinese house boy. By contrast with the novels of the ‘00s, the word “white” is never used to refer to anybody of any color. Though set not far from the Bear Paw Battlefield, site of the final defeat of Chief Joseph and the Nez Perce tribe in 1877, there’s no mention of Native Americans.
There is some Spanish in the cowboys’ everyday language, however, probably imported from Texas. They often use the word sabe, meaning “you understand.” A cowboy next to the wagon boss in authority is called a segundo. To go for a little trip or look around is called a pasear.
More next time.
Picture credits:
1) Book cover with branding iron, amazon.com

Coming up: O. Henry's Heart of the West and another Old West glossary
Posted by Ron Scheer at 6:39 AM