Book: Chip of the Flying U, part 2

Here’s more about B. M. Bower and her first novel, Chip of the Flying U:

B. M. Bower. Among writers who seem to emerge from nowhere, Bower has a remarkable story. Her parents had come as homesteaders to the Montana frontier in 1889, when she was still a teenager. She quickly married another young homesteader, Clayton Bower. They lived often hand to mouth in and around Great Falls, then moved with their three children in 1898 to Big Sandy, 80 miles northeast of Great Falls.
This was cowboy country, and Big Sandy was a cowtown with a regular population of about 100 people. It has been described at the turn of the century as a settlement with several saloons, a couple of hotels, a general store, barbershop, livery stables, schoolhouse, warehouses, stockyards, a stop on the railroad, and a red light district.
Bower drew the attention of a young Canadian cowboy, nine years younger, who was a top hand and horsebreaker but had aspirations beyond cowpunching. Like her, he wanted to be a writer. His name was Bill Sinclair. She encouraged him in his writing, lending him her books, and he read her draft of Chip of the Flying U to get the details of ranch work right.
In 1904, the Bowers’ marriage fell apart, but with the proceeds from the sale of her novel to Popular Magazine, she left Big Sandy. Sinclair followed, and they were married in 1905. Her novel was published in 1906, reportedly rivaling The Virginian in sales.
The Sinclairs lived in Great Falls, with plans for a horse ranch, but after a killing winter, they resettled in Santa Cruz, California. In 1908, Sinclair published his first novel, Raw Gold. (There’s another one for my reading list.) In 1912, they divorced, and Sinclair went on to be a successful novelist living in Canada. 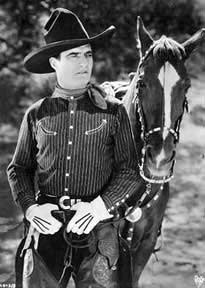 Bower began getting writing credits for films of her novels and stories in 1914. Chip of the Flying U first came to the screen that same year, with Tom Mix as Chip (at left, in an early film). It was remade in 1926 with Hoot Gibson and again in 1939 with Johnny Mack Brown. Not surprisingly Bower eventually settled in Los Angeles.
She wasn’t done with real-life cowboys, however. In 1920 she married again, this time another top hand from her days in Great Falls. Robert “Bud” Cowan was also a talented musician, who might have walked out of the pages of The Virginian, having once married the local schoolmarm.
Though she left Montana, it remained a source of her creative spirit. Thirty-eight of her sixty-six hardcover novels are set there, many of them about the cowboys of the Flying U ranch.
Bower’s western niche. If he read Chip of the Flying U, Clarence Mulford probably would have croaked. Though he and Bower were writing western novels, their books have little in common. Mulford’s cowpunchers have no room in their world for women. Gunplay and horseplay are pretty much the norm in their many adventures. (His later novels involve marriage, and I’ll be interested in how he handles that subject as I read further.) 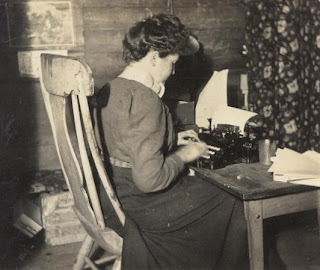 Owen Wister would have been too gentlemanly to croak, but his stomach might well have turned as Bower devotes the plot of the entire novel to a romance, with no mention of cattle rustling or hanging horse thieves. And the complications get resolved without a gun duel in Main Street. Bower’s villain turns out to be a very different kind of adversary.
While Mulford and Wister have their characters traveling by horseback and train over several states and territories, Bower’s are more domestic. Most of the action is played out around the ranch, and key scenes take place indoors where two people can talk – in the ranch house, the bunkhouse, the barn.
Bower wants us to believe in her characters and to care about them. She does this chiefly by keeping a finger to the pulse of their emotions. Her Chip, with his pride, his jealousy, and his confusion, is fully realized in that respect. 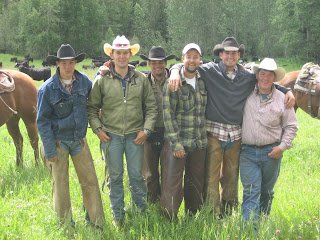 You get the feeling that Bower had learned a lot about men, how they tick, and how imperfectly they understand themselves. And while she may well regard women as the equal of men if not superior, it’s clear that she loves a good man when she finds one – especially if he’s a cowboy with some artistic talent. (Some modern-day Chips from Big Sandy, above)
I haven’t mentioned that during her career, B. M. Bower was believed to be a man by her readers. That’s hard to fathom given the lack of shoot-em-up action in the novel. In fact, there are only two shots fired in the entire book, when her heroine Della kills the coyote at the beginning. Neither is there even a fistfight. But it says something that the way she wrote had a ring of male “authenticity.” Knowing cow country first hand surely was a large part of that.
Not that Wister didn’t. But he lacks the comfortable familiarity you feel in Bower’s writing. Dane Coolidge tried to pull this off, with his first novel Hidden Water, which is deliberately short on physical violence. But there’s much more at stake in his novel – a range war over grazing privileges. Trying to portray conflict in the West realistically, he put constraints on the action that keep the tension only simmering instead of rising to a boil.
You wonder if Wister, Coolidge, or Mulford knew Bower was a woman. Maybe someday if I ever read their letters I’ll find out. Bower’s letters and papers, it turns out, are at the University of Oklahoma (not sure how they ended up out there). I’d certainly leap at the chance to have a gander at them. 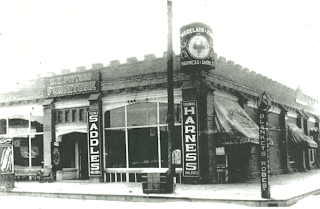 Language. Unlike the verbal gymnastics of Alfred Henry Lewis in his Wolfville stories, Bower keeps pretty much to the middle of the road for language. Her cowboys speak whimsically sometimes but coherently. Chip, however, has an expression that was new to me. He likes to say, “I’d tell a man!” to indicate he’s in agreement with something, and it roughly means “Hell, yes!”
Bower herself finds opportunity for humor in the tough realities of the frontier world she was living in. She captures a kind of spirit that faces adversities without being overwhelmed by them. Reading her story of Chip and Della, you get an optimistic picture of the West. You’d never know that the hopes and dreams of so many in those years were often frustrated if not crushed. Like Bower, most of her family eventually moved on again, leaving Montana for a chance at better lives on the west coast.
Further reading:
E. M. Bower and her family written by her granddaughter
Picture credits:
1) Cattle roundup, Great Falls, c1890, en.wikipedia.org
2) Tom Mix, accomics.com
3) Bower at typewriter, Big Sandy, 1904, oldlibrary.ou.edu
4) modern-day Chips, IX Ranch, Big Sandy, ixranch.com
5) corner store, Great Falls, c1900, bertandernies.com
Coming up:
Posted by Ron Scheer at 7:43 AM