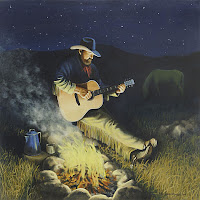 Cowboys in the early days made their own music. They sang, and there were a lot of songs. Sadly, maybe 90% of these songs have been lost, never written down by anyone with the sense to realize they were worth saving and would die with the cowboys who sang them. Today I’m writing about four collections of cowboy songs, two by folklorists and two by performers today who’ve made a career of passing them along to the next generation.

Nathan Howard Thorp, Songs of the Cowboys
Nathan Howard "Jack" Thorp (1867-1940) was the pioneer collector of cowboy songs, publishing the first edition of this book in 1908 and then expanding it in 1921 to its present length of 101 songs and poems, a quarter of them authored by Thorp himself. 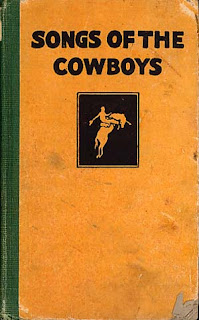 Thorp was born and educated in the East but cowboyed as a young man in Nebraska and the Southwest, eventually settling in New Mexico, where he owned his own ranch. From an early age he began transcribing the songs he heard sung by cowboys. Although cowboy poetry thrives today, these early examples of this oral tradition would have surely disappeared without the efforts of Thorp and a handful of other collectors.
The songs capture the spirit, humor, and language of working cowboys. The sentiments range from youthful boasting and celebration of cowboy life to complaints about the hard work to nostalgic reminiscences about old trail pals to mournful laments about loneliness, misfortune, and death ("Oh, bury me not on the lone prairie"). Thorp's own contribution to the tradition, "Little Joe, the Wrangler," became popular and was widely recorded. It tells of a brave young wrangler killed in a cattle stampede. Hear Justin Bishop sing it below:

Read accounts of cowboys in the early days, and you discover that they loved to sing, and it didn't matter much if they were any good. The cattle on the trail drives got sung to by the night herders. Sometimes cowboys burst into song for no particular reason except excess energy and sheer delight in being alive. A song about the outlaw “Sam Bass” was apparently a favorite. Here's an old 78rpm recorded version, with the words so you can sing along:

After decades of western novels with maybe a stanza of a song sprinkled in here and there as a kind of interlude in the story, it took the sound movie to give the cowboy back his singing voice. Soon we had Tex Ritter, Gene Autry, and the Sons of the Pioneers. John Wayne even gives it a try in an early B-Western. These were all the right idea, maybe, but not the real thing. Thorp's collection of songs literally gathered in the field opens a window with a more authentic view of the hearts and minds of that fraternity of young horsemen who were the first cowboys. 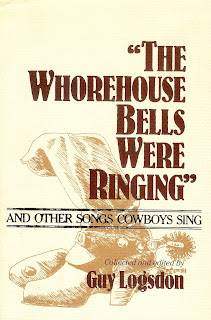 Guy Logsdon, ed. The Whorehouse Bells Were Ringing and Other Songs Cowboys Sing
The risqué title of this book is a little misleading. It's actually a thoroughly researched anthology of cowboy songs by a folklorist with plenty of credentials. Logsdon was director of libraries and a professor at the University of Tulsa in Oklahoma.
For anyone who has read and wondered about the alleged bawdiness of cowboys (early western historians were prevented by editorial restrictions from being very specific), this book will remove all doubt. Of the 61 songs included, many are unexpurgated and unembarrassed evidence that cowboys had more than cattle drives and roundups on their minds. Here's an example, "The Wild Buckaroo," sung by Glenn Ohrlin at the Cowboy Poetry Gathering in Elko, Nevada.
The book includes a lengthy introduction about song collecting, with an extensive preface to each song, noting its publication and recording history and variant versions. Songs are illustrated with a wonderful series of full-page vintage photographs by cowboy photographer Erwin Smith and others. There are bios of the six contributors to the collection, including Dallas "Nevada Slim" Turner and Baxter Black.
Logsdon has also included a long history of cowboy music, ranging from its origins in the pre-cowboy South to the annual cowboy poetry gatherings at Elko. There's a glossary of terms for those unfamiliar with cowboy lingo, plus a 22-page bibliography and helpful index. 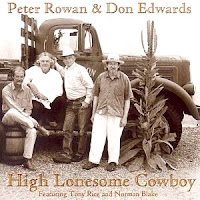 Peter Rowan and Don Edwards, High Lonesome Cowboy
Peter Rowan and Don Edwards have been around awhile, and their grey hair shows it as they lean against the truck on their CD cover. Rowan is a bluegrass performer, and Edwards sings western songs. Together with veteran guitarists Tony Rice and Norman Blake, they have put together a collection of mostly traditional songs that sound like they've sprung straight from the high plains and Rocky Mountains of Colorado Springs, where this album was recorded.
I took the name for this blog from the title of one song, “Buddies in the Saddle,” about the friendship of two partners on the range, one of whom is lost in a storm. Could be a song about two cowboys, or as someone once suggested, a cowboy and his dog. In either case, the feelings don’t lack for sincerity. Turns out it’s a Maybelle Carter song, and since the Carters stole a lot of their songs fair and square from folk traditions, there’s no reason to believe this one didn’t originate somewhere long before them.
The songs make up a rich variety of styles, tempos, instrumentation, and voices. There is the aching ballad "The Night Guard," about a lovelorn young cowboy on the trail who is killed by a long-horned steer. The traditional "Goodbye Old Paint," sung simply with two voices, guitar, and banjo, evokes the era of wagon trains and dusty cattle drives. Every song in the collection is arranged handsomely and performed with fine acoustic musicianship -- guitars, mandolin, banjo, and bass. I recommend this one to anyone with a heart for western-flavored roots music. Here's a short interview with singer Don Edwards on the subject of cowboy music. 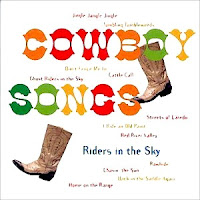 Riders In The Sky, Cowboy Songs
These guys are more entertainers than preservationists, but they’ve got the right spirit. This collection of their songs was selected from their various Rounder recordings. Many of the songs are sung in the tradition of the Sons of the Pioneers, with all the heart-felt sincerity of their quiet end-of-the-day, round-the-campfire quality – at least as it was understood in 1940s Hollywood westerns.
So not all the songs are old ones, but stand-bys like "Home on the Range," "Red River Valley," and "Streets of Laredo" hark more closely to tradition. They’re sung slowly and in mellow harmony with backup from fiddler Woody Paul's achingly yearning violin.
"I Ride an Old Paint" is performed as an old-time barn dance waltz, with long gliding cowboy yips and yee-haws. Altogether it's an entertaining range of songs, tugging at the heart one minute and making you smile the next. They go a long way to portray a range of emotions that the stoic hero of westerns and western fiction has led us to believe didn’t exist.
There are many more performers, and some day I’ll get around to some of them. Consider this a start.
Picture credits:
1) CB by campfire, johnwaynebirthplace.com
2) Songs of the Cowboys cover, homesteadpublishing.net
Coming up: Bertrand Sinclair's 1926 novel Wild West
Posted by Ron Scheer at 5:56 AM