Here are some thoughts on two more fine stories from Pronzini and Greenberg’s The Reel West: 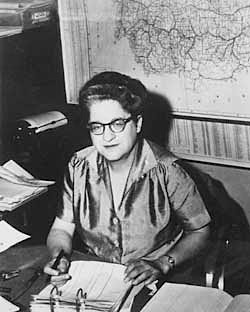 The Man Who Shot Liberty Valance. Montana writer Dorothy Johnson (1905-1984) was a realist – if not an ironist. The line made famous in the movie version of this story, “Print the legend,” was John Ford’s addition. Johnson (at right), writing in 1949, was more interested in the story behind the legend.
She makes her hero, Ransome Foster, an unsavory character who rises in fame, social position, and political fortune despite a host of character flaws and a reputation based on a lie. Through most of the story, he exhibits an unseemly kind of cowardice while seeking to regain his lost self-respect in a gun duel with the outlaw Liberty Valance.
Expecting to be killed, he sustains only a shoulder wound and learns that it was really another man who killed Valance, without anyone else’s knowledge. Finally, it is the love of a good woman, an illiterate waitress, that keeps Foster from achieving the oblivion he prefers.
But irony is piled on irony. It’s the man who saved his life who keeps pushing him to make something of himself – for the sake of the woman they both love. And that man is diminished by the passing of the Old West, an environment that had been his only home. As a man good with a gun, he was of little use once civilization arrived on the frontier.
It’s hard to read the story without seeing and hearing John Wayne and James Stewart in the lead roles. You also miss the spectacular performance of Lee Marvin as Liberty Valance. In the story he appears only briefly to say, “Looking for me?” before he is shot dead. 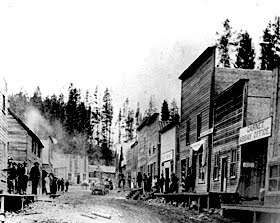 But if you can put that all out of your mind, Johnson’s version of her story is enjoyably plausible without all the star power. You welcome its smaller scale. There isn’t the proliferation of characters you get with John Ford. It’s also set in Johnson’s Montana, not the Southwest where Ford relocated it.
And it stops short of  “Print the legend.” I think we are meant to feel instead that good men and true are typically forgotten by history. It’s the undeserving who are often the ones remembered.
Tribute to a Bad Man. This is a lesser-known film from 1957, with James Cagney in the lead role, based on the 1951 story “Jeremy Rodock” by Jack Schaeffer (1907-1991). Writers Cunningham and Bellah (see last time) were stylists. Leonard is more immediately accessible, but his simplicity disguises a finely honed craft. Schaeffer (at right, below) is more plain spoken, his stories less compressed, and you get 90% of what he’s written on a single quick reading. 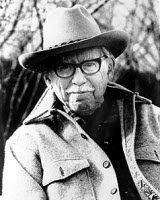 Rodock is a tough-guy horse rancher, who raises and trains horses to work as teams for stagecoaches. Schaeffer takes the reader into this world and carefully explains it all. Bellah, by comparison, has a more sink-or-swim attitude. If you’re not familiar with the military, it’s up to you to figure it out.
As I said, a tough guy, with a history of hanging horse thieves. Not a stretch for Cagney, who often played gangsters. The narrator of the story is a young man, who discovers with his boss that a herd of their mares, with new foals, is missing. Following the tracks of the riders who stole them, they find the herd in a distant valley. The mares’ hooves have been filed down so it’s too painful for them to go back where they were taken from. The cruelty of the act has to make any horse lover cringe.
Rodock figures out that the thieves are really after the as-yet unweaned foals. They’ll be back in 2-3 months to round them up, brand them, and be off with them. When Rodock finally captures the thieves, he punishes them by removing their boots and force-marching them a distance of 50 miles to turn them over to the sheriff. 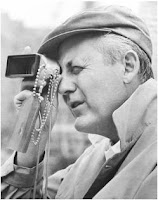 The film, by director Robert Wise (at left), is faithful to this story and adds to it various other incidents and a couple subplots. In one of them, a woman lives with Rodock who loves him but can’t abide his preference for rough justice. She leaves him and has to be persuaded at the end to return to him. They live happily ever after. The film benefits from being shot in color and CinemaScope.
Schaeffer, for those who don’t recognize his name, wrote Shane and Monte Walsh. He is good to read for the clarity of his style and his pacing as he gradually builds tension. His is also a believable West, with a sparing use of violence.
First sentences. The subject of short story openers gets discussed around here, and as a writer I tend to notice first sentences anyway, so I’m offering some of them from this collection before I sign off. You can read all the sentences first and then see who wrote them. 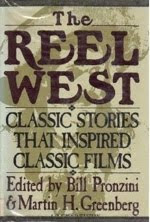 1. I do not think that we ever knew his real name.
2. The trouble began in Loredo.
3. The wind was out of the east, and there can be a great restlessness of soul in the east wind – a ghost shuffle of unfulfilled promise.
4. Sheriff Doane looked at his deputy and then down at the daisies he had picked for his weekly visit, lying wrapped in newspaper on his desk.
5. Now there were three left.
6. He had picked up his prisoner at Fort Huachuca shortly after midnight and now, in a silent early morning mist, they approached Contention.
7. Bert Barricune died in 1920.
8. Jeremy Rodock was a hanging man when it came to horse thieves.He
Now here are the writers, the story titles, and years of publication.
1. Bret Harte, “Tennessee’s Partner,” 1869
2. O. Henry, “A Double-Dyed Deceiver,” 1905
3. James Warner Bellah, “Massacre,” 1947
4. John M. Cunningham, “The Tin Star,” 1947
5. Steve Frazee, “My Brother Down There,” 1953
6. Elmore Leonard, “Three-Ten to Yuma,” 1953
7. Dorothy Johnson, “The Man Who Shot Liberty Valance,” 1949
8. Jack Schaefer, “Jeremy Rodock,” 1951
My favorite of the bunch is the second one, “The trouble began in Loredo.” In five words it sets up expectations and gives a place name laden with Old West associations. Bellah, the stylist, begins by poetically evoking a portentous mood. Cunningham gives the first two words to the name of his central character and then mentions daisies and a “visit.” What visit? He pulls us in by withholding information.
Elmore Leonard starts with a long sentence, too, and it’s mostly exposition, mentioning the two central characters without naming them, two place names, and the time of day, with a quick bit of atmosphere, “silent early morning mist.” A lot packed into one sentence. In five words again, Johnson begins with a death, a name, and a year. Schaeffer also starts with the name of a character, and grabs for interest with a reference to frontier crime and punishment.
Such are the pleasures of the text.
Further reading:
Western historian Sue Shrems on Dorothy Johnson
Picture credits:
1) Dorothy Johnson, jour.mtu.edu
2) Garnet, Montana, 1890s, legendsofamerica.com
3) Jack Schaefer, oberlin.edu
4) Robert Wise, filmreference.com
Coming up: Review of Richard Wheeler’s An Obituary for Major Reno and an interview with the author
Posted by Ron Scheer at 5:48 AM