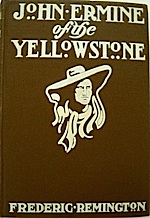 Well known as an illustrator, Frederic Remington (1861-1909) tried his hand at fiction about the West with curious results. In this novel he takes on the dicey subject of race relations and loads it with such irony it’s hard to say for sure what he’s trying to say about it.

He seems to want to tell an eyebrow-raising story of an Indian who desires and attempts to marry a white girl. There is romance and excitement of all kinds in such a setup, but not in a way that has a chance of working out well for the characters. So Remington evens the odds by making his hero not an Indian but a white man raised by Indians.

Plot. John Ermine is a scout for the U.S. Army during the Indian Wars of Montana. There he wins the admiration of the officers for his single-minded, selfless devotion to duty. When hostilities are mostly over, the officers’ wives and families come West to join their men.

Among them is the pretty daughter of Major Searles, Katherine, who draws the young, unmarried bachelors like bees to honey. One of the men, Lt. Butler, seems to be first in line. But she likes the more reserved attentions of handsome John Ermine. She expresses an idle fondness for him, which he mistakes for affection, and he falls into a delirium of love-sickness.

The crisis comes when his proposal of marriage takes her by surprise, and Lt. Butler demands that he return a photo of her that he has been carrying. That unfriendly request gets the response of a gunshot meant to kill, and Ermine becomes at once a fugitive. It’s an unhappy ending in the making, and when it’s over, the white man raised by Indians lies dead—killed by another Indian.

Character. While Katherine is no more perceptive than she has to be, Remington does have her observe that John Ermine “has the primitive instincts of a gentleman.” He may lack sophistication, but his admirable manner seems to spring from his very nature.

Remington isn’t so sure about that. True, nature and nurture have gone hand in hand to produce a man who is fearless, honorable, and a skilled outdoorsman. His pride and his reserve give him a certain stature among men. He never lies and is not acquisitive or materialistic. With his bushel of long, blond hair, he is also gloriously handsome—in a cavalier kind of way.

John Ermine may be white, but his Indian upbringing has refined other primitive instincts as well. He is, Remington says, a throwback to his Teutonic ancestors as they emerged from the caves and forests of Northern Europe. He’s missed out on several centuries of socialization.

Romance. Despite all his admirable traits, they fail to help him navigate the perilous shoals of romance. What he fails to understand is that Katherine’s flirtations are not serious and that he’s not proper marriage material. To those of her class, he realizes, he’s no better than a dog.

But that’s not the whole story. The chief obstacle is his inability to woo and win the heart of a woman instead of simply laying claim to her. Romantic love is not a hidden trait in Ermine, ready to spring forth under the right conditions. It’s not there at all. His death in the last chapter is tragic maybe, but it’s also the inevitable end of a man whose only gentlemanly traits are those of a warrior.

Women. Katherine does not do her gender much credit. Still very much a girl and a shallow one at that, she is bored out of her mind on the frontier. Skilled at drawing room banter, she keeps her many admirers at bay with endless repartee. As drawn in Remington’s illustration of her, she is a thorough Gibson girl. Corseted to emphasize her womanly curves, she aspires to a kind of boulevard elegance.

A spark of independence livens her on occasion, but it’s mostly to shock her mother by being too friendly with John Ermine. It’s a show of independence that has consequences she’s not able to foresee. His offer of marriage, when it comes, is more than a little shocking for herself. We last hear of her in a state of hysterical collapse.

Her role in this novel about men is the simple one of being the cause of John Ermine’s undoing. She is the tempting fruit in the Garden. It’s not a stretch to see the story as a modern retelling of the Fall, with the blame falling as ever to Eve.

Wrapping up. Remington seems to have put his heart into this story. Like many western writers, there is a sense of loss in his Old West. Its pristine moment in history was so brief, and what rushed in to fill it was so crass and destructive. The brief life and death of John Ermine can be read as an allegory of that loss.

The downbeat ending is too dispiriting for an audience wanting a more palatable romantic myth about the Old West. The absence of cowboys in his novel suggests also that he was looking the wrong way for narrative material that would capture the imagination of his audience.

Focusing on the cowboy instead of cavalry and Indians, Wister was either a canny marketer or just plain lucky. Both novels came to print in the same year. One was to become a popular classic, while the other is remembered as a curiosity, a small craft in a tributary of what was to become the mainstream of western fiction.

John Ermine of the Yellowstone is currently available online at google books, Internet Archive, and for the nook.