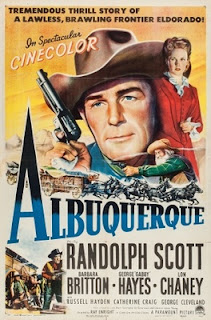 A western is like watching a chess game. It’s black vs. white, the board is the western landscape, and you know all the pieces, their moves, and the overall objective. And like chess games, each western is a little different.

Albuquerque is a Randolph Scott and Gabby Hayes vehicle, colorful and action packed. Scott is his usual handsome and even-tempered self, and Hayes is his comic foil, in some ways the rodeo clown who gets laughs but has a serious purpose. He pitches in with a six-gun when the going gets tough.

Plot. Scott arrives in Albuquerque to take a job with his uncle (George Cleveland), a wheelchair-bound robber baron who wants to monopolize the freighting business. Quickly discovering the man’s lack of scruples, Scott goes to work for his uncle’s only competitor, a freighting company run by a brother and sister (Russell Hayden, Catherine Craig). Hayes is their head muleskinner.

Cleveland owns the local sheriff (Bernard Nedell) and has a stable of henchmen. Most menacing of the bunch are Lon Chaney, Jr., and Dan White, who gets jailed for a stagecoach holdup. White knows too much and when the sheriff arranges a jailbreak, Chaney shoots him before he can get out of town.

Cleveland plants a mole (Barbara Britton) in Hayden and Craig’s operation. He soon learns that the brother and sister have won contracts to freight ore from two mines situated on a nearby mountain ridge. One is mysteriously dynamited before freighting can get started. The other, called Angels Roost, is accessed by a narrow, dangerously steep road and considered inaccessible by most everyone except Hayes.

Scott discovers that Britton has been in league with Cleveland and confronts her with the evidence. But when a fire breaks out at Cleveland’s offices, Scott is blamed and faces trial for arson. His only alibi is that he was with Britton at the time, but chooses for his own reasons not to disclose the fact. A witness, however, saw him coming from her place—a little girl (Karolyn Grimes), who takes the witness stand and clears him. When Britton confirms her story, the case is dismissed.

Romance had begun to bloom between Scott and Hayden, but she now suspects him of fooling around with Britton. All bets are off for the two of them. Craig not only gets shot in the leg by an assailant. He’s gotten sweet on Britton and now learns that she has betrayed him.

The trial judge makes Cleveland and Scott put up a peace bond to maintain a truce, but Chaney picks a fight with Scott, who beats him to a pulp. Scott is then about to leave town, believing he’s been the cause of enough trouble, but Hayes stops him. He wants to attempt bringing down the ore from the Angels Roost mine.

Despite further efforts to sabotage them, they are successful. But before they can say mission accomplished, they have to face a gun battle with a gang of hired gunmen brought to town by Cleveland. Scott, Hayes, and the others pick off all the villains, including Chaney, and Britton puts a bullet into Cleveland as he watches from a window.

In the denouement, wedding bells are back in the offing for the two couples. And Hayes is about to get a shave and a haircut from his heartthrob, Pearl, who runs a tonsorial parlor.

Extras. This is an energetic, briskly paced film with a large cast of characters. A cut above the usual 1940s western, it has the standard plot elements of stagecoach holdups, fistfights, ambushes, and a gun battle. It also features the use of mule teams and the freighting of mine ore as a story idea. For extras, it has a hand-drawn and hand-pumped fire engine used to put out a fire.

The fistfight between Scott and Chaney starts out unexpectedly comical before it turns more earnest and bloody. Cleveland’s performance in a wheelchair adds its own unconventional twist. However, like John Barrymore’s evil banker in It’s a Wonderful Life (1946), it’s an example of how Hollywood has used disability as a sign of moral decay.

Scott is his usual enjoyable self, always calmly confident and seeming slightly amused by the goings on. Hayes is boisterous and animated. While the other men wear a lot of plaid, flannel shirts, Scott is handsomely dressed in smart western-cut clothes. In street scenes, townsfolk are typically dressed in Mexican outfits, and for a fiesta, Hayes wears a fancy sombrero with a serape thrown over one shoulder.

In the sequence that sends the mule teams up and down the mountain for the ore, some dandy matte work adds nicely to the excitement. Meanwhile, true to Hollywood convention, the sets and costumes do not look lived in, and lighting evenly illuminates interiors. And only Hayes sports facial hair, which was, of course, his trademark.

Wrapping up. The screenplay was based on a Luke Short novel,  Dead Freight for Piute (1939), and  the film was shot in Cinecolor in Chatsworth, California, and Sedona, Arizona. One of hundreds of Paramount productions from the 1930s and 1940s, it was sold to MCA/Universal in 1958 and was then apparently lost or misplaced until more recently, when it resurfaced on DVD.

Barbara Britton had a long onscreen career, playing Molly Wood in the 1946 remake of The Virginian and Mrs. North in TV’s Mr. and Mrs. North (1952-1954). George Cleveland appeared in numerous films from the 1930s onward, many of them westerns, and achieved fame finally in the role of Gramps on TV’s Lassie (1954-1957). Dan White was another perennial western actor, with appearances in 262 roles in films and TV, a great many of them uncredited.

Albuquerque is currently available online at youtube, at netflix, and amazon and Barnes&Noble. For more Overlooked Movies and TV, click on over to Todd Mason’s blog.
Tweet