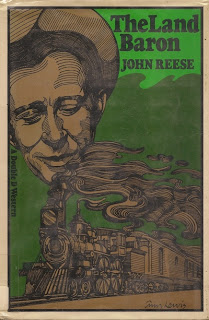 This is the third book in the trilogy, Jesus on Horseback, John Reese’s tribute to his fictional frontier community, Mooney, Colorado. Reese was a reporter and labor editor for William Randolph Hearst’s Los Angeles Examiner, and he is like other western writers who worked in the news business. He has that particular understanding of community that crosses social boundaries and divisions. He knows that despite upstanding facades, crooks and phonies abound. And his opinion of the human condition ranges from salty skepticism to heartfelt sentiment.

Plot. Like other writers, Reese has insisted that plot springs from the characters that populate a story. The Land Baron is chock-full of them, each sharply and often humorously drawn. The man at the center of it all is Sheriff Abe Whipple, and in his role as an officer of the law, his duties make him an attentive observer of the lives of everyone else in Mooney.

The central storyline concerns the arrival in Mooney of a land speculator, Asa R. St. Sure, known to one and all as “Tapeworm.” Full of birdshot from an unknown assailant when we first meet him, he is the sad case of a man who’s come west hoping for a change in a string of bad luck—only to find more of it. Who-shot-Tapeworm becomes the thread on which depends the many people and incidents that make up the novel.

The wheel of fortune turns for Tapeworm when he comes upon inside information that the railroad is building a spur into town. With his oldest daughter’s inheritance from his first wife, he snaps up whatever real estate he can get his hands on. He’s also developing commercial properties in anticipation of the boom he expects the railroad to bring.

Among the cast of characters is his daughter, Virginia, whose fish-out-of-water husband runs off with a carnival performer. When one-armed Elmo Huger, an outspoken Baptist, takes on work as her ranch foreman, he’s humiliated when she freely admits that he’s assumed the place of her former husband in her bed.

There’s a 71-year-old Englishman, Dickerson Royce, who does nothing but drink up a quarterly remittance. A villain, Mike Timpke, who lurks mysteriously on the sidelines, manages to live as an outlaw though he is terrified of guns. There’s Alec McMurdoch, banker and former cowboy, whose horse loses a high-stakes race while he’s trying to take a piss in the weeds with an enlarged prostate. And so on.

Narration. The novel has a narrator, Pete Heath, who has a little ranch outside of town where anyone from immigrants to fugitives can take shelter for a few days, maybe trading horses, no questions asked. You catch his voice now and then in his slightly ungrammatical use of English, with words like “retch” (reached), “catched,” and “overhalls,” and expressions like “He done it.”

Pete is a repository of rumor and local scuttlebutt. Sheriff Whipple may drop by for his opinion on a matter, given whatever news might have reached Pete’s ears. In the few scenes like these, the narration slips into fist person, and it’s a little surprise to be reminded that we are being told a story by someone in the story itself.

Reese achieves a clever sleight-of-hand, by having a marginal character who is also an omniscient narrator. The segues between third- and first-person narration neatly place the novel in an older, oral tradition. Like stories told around the campfire, liberties are taken by the storyteller who pretends to know what someone was thinking, saying, and doing, though they were not present as a witness. And we happily suspend disbelief.

Sky pilots. Sheriff Whipple is a good lawman, decent, patient, resourceful. Yet the true moral center of the community is the preacher, Rolf Ledger, an ex-con who serves Mooney in a seat-of-the-pants spiritual capacity. He is the “Jesus on horseback” of the original title, a role he performs with considerable reservation, having no training in divinity. His only experience was as assistant to a prison chaplain when he was doing time.

Preachers the likes of Rolf Ledger show up now and then in early westerns. Examples can be found in Ralph Connor’s The Sky Pilot (1899), A. B. Ward’s The Sage Brush Parson (1906), and Robert Alexander Wason’s Friar Tuck (1912). They are profoundly good-hearted human beings, whose decency wins them the respect of the rough men of the frontier.

They hold to a high standard of behavior and speak in common, everyday language. Never pious or judgmental, they practice what they preach and are admired for their honesty and forgiving nature. Only the sanctimonious and hypocritical find reason to object to them. An example of that would be the discovery of a “fallen woman” being made to feel welcome among the Sunday worshipers.

The crisis at the end of the novel comes as Rolf nearly dies of pneumonia after rescuing a drunk in a blizzard. Announcing that he is leaving the ministry, he is persuaded to perform one last act of charity, taking a gun from a desperate wife who has already taken one shot at her husband.

Style. There is a wonderfully described carnival that comes to town, at which a brawl breaks out between the local boys and the carnies. And there is wry humor, as when Abe Whipple is treated to a performance by a woman playing a harp. Because the only harps he knows are “mouth harps,” he assumed that they are what angels made their music on.

A certain realism creeps into the narrative, as characters dig privy holes and a man receives a preparation called “quickstep” for diarrhea. There is political satire in the person of C. Julian Wheeler, the lieutenant-governor, known from his rock drilling days as “Goosy.” He is said to have advised a man, “If you ain’t a drunkard by sixty, you ain’t going to make it.” It is a philosophy, we are told, that helped make him “one of the original politicians of the West.”

Besides the humor and comedy, there are moments of well-earned sentiment, as when Chief Buffalo Runs appears in town with his patent medicine show. The chief is really only part Seminole, the rest of him Irish, German, and African American. His grandfather and his mother were both slaves.

He’s accompanied by a fellow performer, Princess Moon Ring, a foreign-born woman he rescued from the streets of New Orleans. Rolf marries the two, and the town turns out for their show, honoring an “Indian couple” now “converted” to Christian ways. Having arrived in Mooney dead broke, they leave again with $32 in sales. Nothing funny about that.

Wrapping up. Reese was a prolific writer of short stories and novels, writing under a number of pseudonyms. Starting with a story, “The Nester of Coffinrock,” in 1942 in Ace High, he quickly became a regular contributor to Saturday Evening Post. There are reviews at BITS of the first two books of the trilogy, Angel Range (here) and The Blowholers (here).

His granddaughter remembers him as active in the labor movement, having organized a successful cannery strike in the Imperial Valley. Jack Smith, newsman for the Los Angeles Times, recalls that he was a generous man who tried to maintain a reputation as a curmudgeon. Reese felt his finest moment came the day in the City Hall pressroom when he ran out Richard Nixon, who’d been pestering him for a favor at the newspaper.

A bio of the life of this Nebraska-born writer can be found in Tuska and Pierkarski and Twentieth Century Western Writers. The Land Baron is currently available at AbeBooks. For more of Friday’s Forgotten Books, head on over to Patti Abbott’s blog.
Tweet