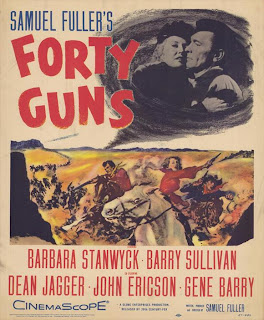 Sam Fuller wrote and directed this noir western that pushes the genre well over the top, in the energetic style he is remembered for. Barbara Stanwyck plays the lead as a “high ridin' woman,” who rules Arizona from her ranch outside Tombstone with the help of a forty-man militia. Barry Sullivan arrives, like the legendary Wyatt Earp, to put a stop to the lawless mayhem that spoils life there for everybody else.

Plot. Like Earp, Sullivan has with him two brothers (Gene Barry and Robert Dix). Barry is Sullivan’s number two man, who covers him with a rifle when Sullivan faces down a troublemaker. Young Dix wants to be part of the game, but the days of the gunman are over, and the two older brothers want him to go on to California and find a line of work with a future.

Stanwyck’s brother (John Ericson) shoots the marshal (Hank Worden) and is found drunk and disorderly by Sullivan who pistol whips him into submission and puts him in jail. Stanwyck has the local sheriff (Dean Jagger) and the judge in her pocket and quickly gets him out again.

Sullivan rides out to the ranch with a warrant for the arrest of another of her men (Chuck Roberson), for robbing the mail. He arrives at dinnertime, as her forty men sit with her at a long banquet table. Dressed in an evening gown, she takes a shine to Sullivan and offers him a job as sheriff. She’s looking to replace Jagger.

When they meet again, outside of town, they are caught in a violent storm and take shelter in an adobe hut, where they get intimate. “I want you to throw in with me,” she says, “I need a strong man to carry out my orders.” Still no dice. “And a weak man to take them,” he says.

Jagger, wanting Sullivan out of the picture, sets up an ambush, using an outlaw to shoot him in the back as he tries to make an arrest. In a suspenseful scene, young brother Dix sneaks up on the shooter and kills him instead.

Stanwyck makes a last play for Sullivan. The sheriff, long in love with her himself, interrupts the pair of them with a gunshot, hoping once more to eliminate Sullivan. Stanwyck fires him. Humiliated as she writes him a last check for his services, he despairs and hangs himself before leaving the premises. (Remember, it’s a Sam Fuller script.)

Meanwhile, brother Barry has taken the vacant marshal’s job and marries the pretty daughter of the town’s gunsmith (Eve Brent). But the groom is abruptly shot dead as the couple leaves the church. The bothersome Ericson is arrested yet again, and he breaks out of jail, taking sister Stanwyck as hostage. In another standoff in the street, Sullivan puts a bullet through both of them, wounding Stanwyck and putting an end to her brother.

With the final scene, young Dix is now marshal and Sullivan is headed out of town for California. Stanwyck, fully recovered, runs several blocks to catch up with him and in the last frames of the film jumps into his wagon alongside him.

Camera and editing. Shot in Cinemascope and glorious black and white, the film was made in that window of time when movies had gone wide screen but not all of them in color. It is visually dramatic, capturing the rolling sweep of the outdoors and enjoying the noirish play of light in its street scenes at night and its shadowy interiors.

The opening shot is an aerial view of a vast treeless plain that stretches out in all directions. Just a moving dot in this expanse, a team of horses pulls an open wagon slowly along a ribbon of road disappearing into the distance. It is Sullivan and his brothers, en route to Tombstone. Cresting a hill and racing toward them is a black figure on a white horse, followed by some forty riders, in pairs, at full gallop. They part to pass on both sides of the wagon, like water flowing around a boulder in a stream. And all this before the credits. You can watch it here:

The film makes use of high and low angle shots to pump excitement into several scenes. The walk-down early in the film as Sullivan confronts the drunken Ericson is edited to ramp up the suspense with close-ups of boots in the dust, hands at gun belts, and Sullivan’s eyes. You picture the diminishing distance between them, but without long shots, you can’t tell until he does it that Sullivan has walked right up to Ericson, close enough to simply crack him in the skull with a bun barrel.

The film is full of moments like that, even something as simple as an exchange of dialogue between Stanwyck and Sullivan, as the horse she’s riding keeps dancing about under her. The movement underscores the agitation in the delivery of her lines and gives edginess to a scene that would have been visually and dramatically inert without it.

There are several interesting moments in the film when a scene is played out in a single long take. The final scene between Stanwyck, Sullivan, and Jagger covers what must be several pages of script as a quiet conversation is disturbed by a gunshot and characters jump up, move about, enter, and exit, the camera all the while rolling and rolling—up to six minutes.

More dramatically structured is a long tracking shot that starts with two of the brothers going down a flight of stairs to the street, where they are joined by Barry and then Jagger. The camera follows the four of them as they talk, walking together. Jagger has a long monologue, and they stop at a telegraphy office to send a telegram, exchanging words with the telegrapher. Then they observe as a bunch of Stanwyck’s men ride into town, passing by them in a cloud of dust. All this, carefully choreographed, occurs in a single 2.5-minute take.

Added value. Most 1950s westerns that come packaged with ballads have them sung during the credits (“Do not forsake me, oh my darling . . .”). The songs in this film are performed on camera instead, by a tenor who operates the town bathhouse (Jidge Carroll).

Fuller slips a little steam into the love scenes. Ericson is seen thrashing around on the ground with one of his Mexican sweethearts. When Stanwyck offers to fondle Sullivan’s gun, he warns her that it might go off in her face. “I never kissed a gunsmith before,” Barry says to Brent. “Any recoil?” she wants to know.

As for realism, there is not a lot in the film. It’s curious that the three brothers arrive in town in a wagon instead of on horses. Besides the team in front, there’s a saddle horse tied to the back. That makes a horse for each of them, but it still seems like a rough, slow way to travel.

The town of “Tombstone,” of course, is the studio’s western set, not a settlement that looks much like the real McCoy. But maybe the biggest stretch of credulity is the storm that produces a tornado in the scene that has Sullivan and Stanwyck taking shelter together. The wind, blowing dust, and tumbling tumbleweeds are realistic enough, but tornadoes belong in Kansas.

The last third of the film gets somewhat rushed, as too many plot developments crowd in, including Stanwyck’s attempt to hide her brother, who is wanted for murder. The hunt for him is quickly truncated. When he’s found, she vows to do anything to keep him alive, but while we may brace ourselves for that eventuality, nothing quite like that ever happens.

Wrapping up. Stanwyck is great in the film, given the role of a tough, beautiful woman who can hold her own in a room full of men (no big challenge for her). She is said to have done her own stunt work when her character is dragged by a horse. She also manages to make us believe that she’s willing to give up everything—money and power—trading in her 40 men for the love and companionship of just one.

The men in the film are certainly competent. Barry Sullivan has a steady, quiet reserve and Gene Barry (later to be TV’s Bat Masterson) is even quieter. Dean Jagger’s sheriff has the appropriate complexity of a man whose authority depends on the good will of a woman to whom he has also surrendered both body and soul.

Sam Fuller had a long career as a writer and director for film and TV. Among his 30 titles as writer-director are a few westerns, I Shot Jesse James (1949), The Baron of Arizona (1950), and Run of the Arrow (1957). Forty Guns is currently available online at youtube, at netflix, and at amazon and Barnes&Noble. For more of Tuesday’s Overlooked Movies and TV, head on over to Todd Mason’s blog.