Robert Dunn, The Youngest World: A Novel of the Frontier (1914) 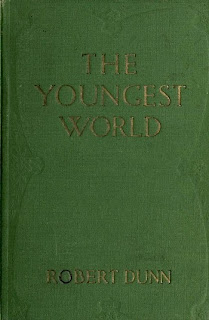 There are long novels, and then there are monumental novels. This one falls in the latter category. It is not one but as many as four separate adventure stories folded into a saga of a man’s journey to Alaska to make something of himself and to understand the meaning of existence. Few early westerns take on such an ambitious project, but Dunn is determined to give it a go.

Plot. His main character, Gabriel Thain, starts out as a confused and unhappy 25-year-old. On impulse, he books passage on a coastal freighter sailing from Seattle to Alaska. En route, he meets two people, Clara, who catches his fancy, and an explorer, Robert Snowden, who persuades him to climb a snowbound mountain peak with him. The climb is arduous and finally a killer. Thain survives, but Snowden, snow-blind, succumbs to mountain fever and freezes to death before reaching the top.

Back off the mountain, Thain joins a party of explorers from Idaho, led by a forthright man, John Hartline. They have found copper in the interior of the territory but are up against the greedy machinations of a big copper trust. A crew employed by the trust blocks their way and a gun battle ensues.

Thain treks by dogsled for months across the uncharted land, meeting all manner of colorful and intrepid frontiersmen. One of them, Dick Trueblood, saves his life when he falls through ice into a river. Thain then winters in a mining camp, Chickaman, a desperate place full of desperate people.

In an isolated valley, he discovers gold and stakes a claim. To his surprise, he also discovers Clara nearby. They travel by skow on an open channel in a frozen river, and they narrowly escape death in an ice jam.

Skip ahead a year or more. He and Clara are operating a trading post in an Inuit village along the coast. A pair of speculators arrives on the monthly mail boat. They have invested in Thain’s claim and want to see it. With Thain, they strike off into the approaching winter.

After many weeks, without locating the claim, they reach the end of their rations and their strength. The horses, unable to go farther, have been shot. The dogs pulling their sled have drowned in the river. Looking at certain starvation and death by exposure, they are rescued in the novel’s final pages by another prospector, Thain’s old friend, Trueblood.

Women and romance. There is plenty in the book about males and females getting together in the quest to live happily ever after. But this is not your usual romance. Always rationalizing, Thain is not content to just let libido lead the way. Love has to fit into some grand design of the Universe. Woman has to take her place alongside a bunch of other capitalized abstractions: Self, Nature, Love, Fate, Charity, and the Great Will of Existence.

In the wilderness, he gets conflicting advice from other men about women. Climbing the mountain, he comes to understand that for Snowden women are not a necessity. Conquering an unclimbed mountain is grander than being a husband and father. Later, Dick Trueblood tells Thain that attachment to women is the ruin of men because they make a man too soft, and you have to stay tough in the wilderness.

When Thain and Clara marry, he is troubled when after a year she has been unable to conceive a child. Their lack of offspring erodes the confidence he struggles to have in himself. He believes their union is incomplete until she has made him a father.

Character. Like other early western novels, this is a story about the building of character. When we meet Thain, his life has gone off the rails, chiefly because he has been willful and impulsive. During the rest of the novel, he keeps meeting men who demonstrate different ways of being strong and independent.

In the final chapters, facing death on the trail, he realizes that he has finally lost all of his self-doubt. He has a confidence born of “his own lonely being.” All comes together for him as he comprehends once and for all that he is “a wanderer, marching eternally upon the common trail of life.”

Villains. The novel’s reprehensible and unscrupulous characters are men we never meet. They exist a continent away in the boardrooms of Wall Street. There they manipulate the law and the judicial system to crush ordinary individuals, robbing them through fair means or foul of what rightfully belongs to them.

Thain finds that Lamar, an agent for the trust, is a callous, vain and indulgent man, an instrument of a “cancer” that has destroyed pioneering. Men like him turn other men into “slaves,” killing their dreams as they “buy and bribe their souls.” Lamar’s philosophy is simple and Darwinian: “I believe in the survival of them that do survive.”

Style and structure. This long (492 pages) novel has a lot on its mind. Thain is the single point-of-view character throughout the book, which tracks his many moods and psychological states. Super self-aware, he swings between feelings of elation and despair, in a way that would be called bi-polar today.

Best of all, Dunn can write highly suspenseful scenes of adventure. The day-by-day progress of the mountain climb, the boat trip down the ice-laden river, the final misbegotten trek into the wilderness as winter descends and the days shorten—all are grippingly told.

These occur shoulder-to-shoulder with some of the most overwritten and melodramatic episodes to be found anywhere in fiction of the period. Add to these long sequences on metaphysical topics, as Thain struggles manfully to understand the meaning of Life, and the novel begins to sink under its own weight.

While the storytelling has its excesses, it is a rich source of detail about the world in which the novel’s characters exist. The description of Seattle streets, teaming with workingmen, is a panoramic picture of human life on the edge of a descent into hell. During the weeks Thain spends in Chickaman, Dunn provides a vivid portrayal of mining camp life.

Wrapping up. Born in Newport, Rhode Island, and Harvard educated, Robert Dunn (1877-1955) had an adventuring spirit. As a young man, he traveled in Alaska during the gold rush days of 1898 and returned again in 1900. In 1903 he joined a party of explorers led by Frederick Cook in an attempt to climb Mt. McKinley. His warts-and-all account of that expedition was published in The Shameless Diary of an Explorer (1907), which remains a classic of the genre today.

During WWI, he was a war correspondent for the New York Evening Post. His dispatches were collected in Five Fronts (1915). In April 1915, he was taken to task for reportedly being handed a Mauser behind German lines and firing in the general direction of French troops. Various versions of the story exist, including one that implicates fellow reporter John Reed (Ten Days That Shook the World, 1919).

The Youngest World seems to be Dunn’s only novel. FictionMags Index lists a dozen or more of his short stories published during 1903-1917 in Everybody’s Magazine, Collier’s, and The Popular Magazine, among others. Dunn’s novel is currently available at google books and Internet Archive, and for kindle and the nook. For more of Friday’s Forgotten Books, click over to Patti Abbott’s blog.
Tweet