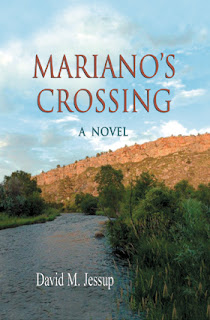 Reading this novel set in the Old West, I was reminded at times of two other historical novels, Snow Falling on Cedars and The Kite Runner. Neither of those books are westerns, but they deal with similar themes—racial and ethnic bigotry and relationships across class boundaries. In all three, there is also a thread of menace.

Plot. We know from the start that a 15-year-old girl, Lena, has died. We don’t know who or what killed her. Her mother, Takansy, a Flathead Indian, has spirited her body away to a last resting place in a cave. She wants to prevent her husband, Medina, a Mexican, from burying the body in the ground.

Meanwhile, John Alexander, the son of a local sawmill operator, is searching for the girl. We gather there has been a romantic attachment between the two that her father has been attempting to prevent. Flashback then to 10 years previous, and in the rest of the novel the entire story of all four characters is told, leading up to its tragic conclusion.

Style and structure. This is an old-fashioned novel in the measured pace of its unfolding. The setting is Medina’s trading post, at a spot on the Oregon Trail called Mariano’s Crossing. Over the decade of the story’s telling, we observe as a community springs up around it and settlers arrive to homestead the land.

There are three point-of-view characters, Takansy, Medina, and John Alexander, each chapter devoted to one of them. For John, they are years that mark his coming of age and his falling in love with Lena.

The girl is torn between the three of them, each with their own plans for her life. Medina sees marriage to a man of means and sends her away to a Catholic school in Denver to get a first-class education. Takansy trains Lena as a horsewoman and schemes to take the girl back to her tribe in Montana. John Alexander arranges to elope with her.

However, we never know which of the three Lena owes her allegiance to. She seems to go along with whomever she is currently talking to. Meanwhile, there is some doubt whether she might be secretly involved with another student at her school.

There are a few other characters who seem interesting, and you wish you could get to know them better. Takansy’s son from her first marriage, Louis Papa, is one. And there is his congenial father, Papín, a French-speaking frontiersman who comes for a visit. Arah Sprague, an apparently thoughtful schoolteacher, would have given us an interesting portrayal of this little community. Even Kit Carson, on his last legs, passes through and would have provided a wise and colorful perspective.

Themes. There is discord among the settlers concerning the Medinas’ racial stock and the mixed blood of their daughter. The Alexander family is additionally obsessed with them as “papists.” Medina is good-natured and generous enough to keep the animosity against his family at a low simmer, but it still rankles.

And discrimination works both ways. Both Medina and his wife object to John Alexander’s interest in their daughter. To them his family is no better than poor white trash. John lacks the money and social position to offer her a standard of living they believe she deserves.

The hatred against Indians is intensified when a renegade bandit, Captain Jack, steals horses from Medina. A small group of scalp hunters goes after him and brings back most of the horses—and the bandit’s scalp. But peaceable Indians in the area are considered just as threatening, and news of the massacre at Sandy Creek is welcomed by some of the whites.

Related to the undercurrent of racial hostility in the community are the lies, half-truths, and secrecy that all of the central characters use to protect themselves. John Alexander is continually attempting to hide his actions and his motives from others. It is behavior that is understandable, given the violence of his father’s rages, but it shows him as not fully a man. Even at the end, he is running away with Lena instead of facing those who would have him bend to their will.

Wrapping up. This is a long novel (380 pages) based in part on the history of a little community north of Denver on the Big Thompson River below Estes Park. Mariano Medina actually existed. In his early years he was a mountain man the likes of Jim Bridger. In later years, when the story takes place, he is a successful business owner.

Jessup has built a character of the man from documented sources. Less is known about his wife, Takansy, but the death and mysterious burial of Lena are part of local legend. The Alexander family also appears in the records, though the romance between John and Lena is a fabrication. The novel was inspired by memories of a visit Alexander made as an old man in 1947 in search of the original settlement.

Mariano’s Crossing is currently available at amazon and Barnes&Noble and for kindle and the nook.