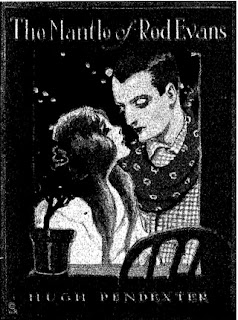 Mystery solved, thanks to Carol Sandler at The Strong in Rochester, New York, who kindly pdfed me
a copy of a Hugh Pendexter book I’ve been looking for. The Strong, by the way, is self-described as “a highly interactive, collections-based educational institution devoted to the study and exploration of play.” Sounds like a great place to visit.

Followers of BITS may remember that I’ve complained about not being able to find this book, only the short story by the same name published in Munsey’s Magazine in October 1911. I knew it had been published as a book, because it was listed as such in Geoffrey Smith’s bibliography, American Fiction, 1901-1925 and Geoff Sadler’s Twentieth Century Western Writers. But unlike every other public domain novel I’ve searched for, this one was impossible to find, except printed copies at far distant university libraries and not available for circulation.

Turns out The Mantle of Red Evans was published as a short novella by Munsey’s and not expanded into a full-length novel as I’d assumed. In fact, if I’d read the entire entry in Smith, I’d have noticed that the book was only 32 pages. I’m assuming the edition was a hardback, but I don’t know. It had a cover design and one illustration by an unnamed and apparently new illustrator. Illustrations for the original magazine version were by W. Herbert Dunton. Either Pendexter or a Munsey's editor, dignifies the story’s publication as a book by prefacing it with Edgar Allan Poe’s dictum:

Were I called upon to designate that class of composition which should best fulfil the demands of high genius—should offer it the most advantageous field of exertion—I should unhesitatingly speak of the short prose tale. The novel is objectionable from its length. As it cannot be read at one sitting, it deprives itself of the immense force derivable from totality.

In other words, "be prepared for a work of high genius."

Plot. The story is simple and has a humorous tone. It’s very possibly influenced by O. Henry, as it has his kind of ironic spoofing of western conventions and a surprise ending. There’s also a big helping of romance to round out the story’s conclusion.

By 1911, when the story was first published, the gunman was already a stock character in western fiction. He was a man whose reputation preceded him, and people quietly melted into the woodwork on his arrival at a saloon. Should he choose not to pay, drinks were on the house.

Such is the opening of the story as a young man walks into a saloon in a dusty western town and lets it be known that he is Red Evans, the most feared gunman in the territory. He’s known to have “potted the Dutch Twins,” and there are mixed reports of other killings. Curiously, he drinks his whiskey with a glass of milk, reportedly to steady his nerves.

Gunslingers and troublemakers from nearby towns, Big Rennon and One-Eyed Brown, want nothing to do with him. Folks there in Sandville feel some relief that his presence will keep away the ruffians and contribute to a long elusive peace. He’s cause for some civic pride, too, having chosen their town to take up residence.

The man himself has his own reasons for alighting in Sandville. He’s on the trail of a pretty young woman he’s seen get off the stage. She’s the new hotel manager, and when he wants to rent a room, she turns him away in no uncertain terms, drawing the line at gunslingers and liars. When he declares his love for her, she is unmoved.

Tables turn when another man arrives, calling himself Red Evans. The girl gives him the same treatment. Not only does she demand that he remove his firearms, she says she knows he’s really someone else and that he is a “sluice-thief, horse-thief, cattle thief, and several other kinds of a thief!”

Finally, the lovesick young man admits he’s an imposter as well, and she reveals that she’s known it all along, for the real Red Evans was her father. And she confesses that she has loved the young man from the moment she first saw him. Declaring their mutual affection, they intend to waste no time getting married.

Wrapping up. It’s a charming story, neatly told, shuffling together conventions of romance and myth to be found in western fiction of the time. Among them is the independent and fearless girl who stands up to tough men, who turn out to be not so tough.  Characters start out as caricatures drawn from a fictional world and resolve into ordinary people with ordinary human aspirations—to be respected and to find true love.

Hugh Pendexter (1875-1940) was a hugely prolific writer of mostly western fiction that was noted for being based on extensive historical research. Born and educated in Maine, he was a journalist for the Rochester (New York) Post Express before settling in Maine as a full-time writer. He published over 100 stories and serials in the pulps and slicks and over 40 western-themed novels, plus a number of books for young readers.

His first published novel, Tiberius Smith (1907), was a collection of stories about a P. T. Barnum-style showman and world traveler. It was reviewed here a while ago. Two Silent Era films were based on his stories: A Daughter of the Wolf (1919) and Wolf Law (1922).
Tweet