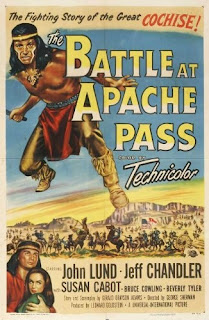 It’s often a surprise to discover that a western has been based on actual historical events. Such is the
case with this one, set in the 1860s. It’s an account of how an uneasy peace with the Apaches fell apart thanks to government attempts to relocate them from their traditional homelands. It tells of a time when the names of Cochise and Geronimo became synonymous with the Indian Wars of the Southwest.

The film is a prequel to an earlier James Stewart western, Broken Arrow (1950), about the efforts of Tom Jeffords to arrange a truce with Cochise after a decade of bloodshed. In both films, the roles of Cochise (Jess Chandler) and Geronimo (Jay Silverheels) are performed by the same actors.

Plot. The story at its outset emphasizes the trusting relationship that exists between Cochise and the commanding officer, Major Colton (John Lund), at Fort Buchanan. On both sides, however, there is trouble brewing. Geronimo is gathering a band of warriors to drive out the whites.

Trouble comes for Major Colton in the form of an agent from Indian Affairs, Neil Baylor (Bruce Cowling), who arrives with a contingent of replacements under Lt. George Bascom (John Hudson). In their company is a trader, Mescal Jack (Jack Elam), known for selling liquor and arms to Indians. With the impressionable Bascom under his influence, Baylor intends to clear the region of Indians to make way for economic development. He has brought along heavy artillery to enforce his plans if the Indians prove recalcitrant.

Geronimo’s attacks are enough to spark a campaign by Bascom’s troops against Cochise, who is blamed for killings, mutilations, and kidnapping of children. At a meeting with Bascom, Cochise escapes a craven attempt to capture him. Hostages are taken on both sides, and all of them are killed. Cochise and Geronimo now join forces against the whites.

Meanwhile, troops are needed back East to do battle against the South in the Civil War, and Fort Buchanan is abandoned. As the troops pass through Apache Pass, they are ambushed by the Indians. The Indian agent Baylor is one of the first to die. In what becomes a fierce engagement, the howitzers are put to use, and the heavy artillery eventually forces Cochise to call a ceasefire.

Raising a white flag, he approaches the cavalry with his wife Nono (Susan Cabot), wanting the white medicine of the Army physician (Regis Toomey), as she is in some physical distress. Though the Production Code has permitted scant evidence of it, we have known from early in the film that she is pregnant. She receives the attention of the doctor, as well as the solicitous concern of a white schoolteacher (Beverly Tyler), who happens to be traveling with the company of soldiers.

Meanwhile, Geronimo, outraged by Cochise’s willingness to deal with the whites, declares himself leader of the Apaches. The two men fight it out with knives, until Cochise subdues Geronimo. Then, he learns that his wife has given birth. Mother and son doing well, they ride off again, though Cochise clarifies that he has not been reconciled to the whites. There will be time in the future to talk again of peace.

Romance. The usual romantic subplot gets lost in the shuffle of all the action in this western. Cochise advises the lonesome major that the schoolteacher would make a good wife for him. The two get a brief scene, in which each tests the water with the other, but that is the extent of any intimacy between them. No big hug and kiss before the credits roll.

For intimacy, the film gives us several scenes between Cochise and his wife, Nono. They are a loving couple, and he is tender to her. She is building a wickiup for the two of them as they wait for their firstborn. The only trouble comes when he has rescued the schoolteacher from Geronimo, and Nono worries that his affections are being drawn away by this “copper-haired” white woman.


Indians. Both Broken Arrow and The Battle at Apache Pass are notable for their relatively benign portrayal of Indians. Jeff Chandler’s Cochise is a peace-loving man who struggles to understand the whites. He calls Major Colton his friend, and carries himself with a calm dignity.

For Cochise, the whites are confounding. While they talk of peace, they make war against each other, and experience teaches him that they cannot be trusted to play fair. While they lie to him, they accuse him of being a liar. “I do not lie,” he insists, stunned by the accusation.

Some at the fort have more relaxed attitudes toward the Indians. Major Colton believes, apparently rightly, that Cochise is a man of his word and can be trusted to help keep Geronimo in line. We are the intruders, argues the schoolteacher. There is good and bad in all races. As for using force to subdue the Indians, the doctor says he’s seen too much of bloodshed already in his life.

Baylor, the government agent, and Lt. Bascom are quick to scoff as such notions. Baylor is heartless and willing to sacrifice anyone in the way of his ambitions, which include governorship of the territory. Bascom is too young and inexperienced to see the Indians as anything but savages. Jack Elam’s Mescal Jack is just a sleaze ball.

Jeff Chandler, for being a Jewish actor from Brooklyn, offers us a believable and memorable Cochise. He was even nominated for an Oscar for the role. His character’s somewhat stilted English and his stoic demeanor make him a man of quiet dignity, unlike the stereotypes of savagery we get in previous westerns.

True to Hollywood convention, the Indians speak English to each other. It would take a decade or two for a movie like Little Big Man (1970) to show Indians with a more complex range of personality and emotions, including humor. Maybe the more accurate depiction of cross-cultural communication can be found in Kelly Reichardt’s Meek’s Cutoff (2010), in which not a word is understood on either side.

History. The Bascom Affair is a matter of record in history and is represented in the film with apparent truth. Lured into a trap, believing he had been invited to a meeting to negotiate with Bascom, Cochise escaped by slashing his way through a tent wall. Both this incident and the subsequent killing of hostages are portrayed in the film.

The Battle of Apache Pass actually took place in 1862. General James Henry Carleton and his California volunteers were attacked by 500 warriors led by Cochise and his father-in-law, Mangas Colorades (not Geronimo). Army howitzers were used to fire on them, and the Indians held their own for several hours before fleeing (not just the 2-3 minutes depicted in the film).

Although the binaural stethoscope had been invented in 1852, it was not in general use until after the Civil War. The Army physician, however, has one hooked around his neck like a modern-day doctor. There are no doubt other anachronisms in the film, but since I’m not a firearms or military uniform expert, this is the kind of detail my eye tends to catch. (And thanks, by the way, to Keith Souter for his essay on the frontier doctor at the Western Fictioneers blog.)

Wrapping up. Shot in Technicolor and standard ratio in locations around Moab, Utah, this is a handsomely photographed film. It has been briskly directed by George Sherman. In a career spanning four decades, Sherman had credits for 126 films, many of them westerns, including John Wayne’s Big Jake (1971) and the remake of Smoky (1966), adapted from Will James’ classic novel. The screenplay was written by Canadian-born Gerald Drayson Adams, who wrote numerous westerns, including Taza, Son of Cochise (1954).

The Battle of Apache Pass is currently available online at youtube. For more of Tuesday’s Overlooked Movies and TV, click on over to Todd Mason’s blog.
Tweet

Coming up: Hugh Pendexter, The Mantle of Red Evans (1914)