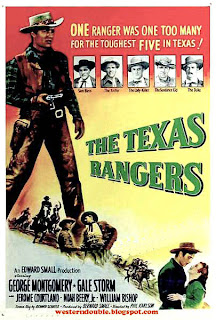 There are a couple of facts in this fact-based western about outlaw Sam Bass. Otherwise, you can throw away your history books. The film starts with the organization of the Texas Rangers after the Civil War under Major John Jones. It ends with the death of Sam Bass in Round Rock, Texas. Everything in between is a fabrication.

Two of them (George Montgomery, Noah Beery, Jr.) are double-crossed by Sundance in an early scene, and the two men are captured and put in prison. There they are subjected to water torture until Jones (John Litel) offers a pardon if they come to work for him. Montgomery has inside information on the gang as well as a reputation as a gunman.

A crusading newspaper publisher (Gale Storm) pitches in at this point to object to giving law enforcement jobs to two “rotten apples.” Her father had been killed at the scene of the robbery where the two were arrested. The headlines in her paper alert Bass that Montgomery and Beery have been freed to go after him.

The rest of the movie becomes a cat and mouse game between the two Rangers and the gang, as each tries to outsmart and outshoot the other. An ambush fails as The Sundance Kid tries to dispatch them along with Montgomery’s tag-along younger brother (Jerome Courtland). Montgomery sneaks up on the Kid and kills him (which may come as a surprise to those who know their history).

Having settled an old score with Sundance, Montgomery intends to quit the Rangers, but Beery and Courtland remind him of the oath he took when he was sworn in. Ambushed again, the three put up a good fight, eliminating all but one of the bushwhackers. But Courtland takes a round and dies in Montgomery’s arms.

The Bass gang attempts a Wells Fargo robbery that is interrupted by Montgomery, who makes off with the loot. Believed to have returned to outlawing, he's now wanted, dead or alive, while he explains to Beery that he's actually trying to capture Bass single-handed.

Joining up with the gang over a chicken dinner, Montgomery sets up a trap by involving them in a plan to rob a train with a gold shipment. Meanwhile, Beery is supposed to get word to Jones and the Rangers to be waiting for them in Round Rock, the scene of the robbery.

Alas, Beery is captured by the gang and shot dead as Montgomery stands by unable to prevent his pal’s demise. He tries again to get word to the Rangers by stopping at the newspaper office on the gang’s way out of town, giving Storm instructions for Jones while smashing up the office and pretending to push her around.

But in a change of plans, Bass has some of the gang, including Montgomery, jump the train before it reaches Round Rock. The action escalates into high gear as the hijacking evolves into the usual chills, spills, and thrills. As the train races on, Rudabaugh attempts to kill Montgomery but gets shot instead. Bass is similarly dispatched, and the train finally comes to a stop at Round Rock where Jones and the Rangers are waiting.

Montgomery’s heroism exonerates him. Jones shakes his hand, townsfolk wave and cheer, and Storm gets a big kiss.

Extras. The story is fast paced. All of this happens in little over an hour. Despite the routine western elements, the film has its moments. The gang’s gathering over a KFC-style chicken dinner adds a comic touch to a tense scene, as Montgomery persuades Bass that he’s as crooked as he claims to be.

The rough-love scenes between Storm and Montgomery give a visceral turn to the usual romantic sub-plot. The two get off on the wrong foot with her display of sarcasm as she fiercely objects to his release from prison. In a later scene, the dispute heightens until she slaps him hard across the face. Then in their last confrontation, he throws her around, pushing her back into a swivel chair every time she stands up, then surprising her with what is meant to look like an unwanted kiss.

The train robbery is worth waiting for. It unfolds with nail-biting excitement, the thunderous roar of the wheels the only sound on the soundtrack. The film is jam-packed with characters and action, played out against handsome scenery. Not a lot of fancy stuff, but competent, economical, and precise storytelling. Definitely a B+.


Wrapping up. The film was shot in color on ranch locations in Simi Valley and Chatsworth in Southern California, and on the Sierra Railroad in Jamestown, California. George Montgomery was a tall actor with the kind of generic good looks that gave him a busy if not illustrious career in film and TV. Not many of his films were westerns, but he did play a gun-toting mayor in a western TV series, Cimarron City (1958-1959).

Versatile character actor Noah Beery, Jr., had a lengthy screen career starting in the Silent Era, with numerous westerns in the 1950s and culminating in a supporting role in TV’s long-running The Rockford Files (1974-1980). Gale Storm appeared in several 1940s westerns and starred in the simultaneous radio and TV series, My Little Margie (1952-1955), followed by TV’s The Gale Storm Show (1956-1960).

Writer Richard Schayer had extensive credits, including many westerns, from the 1910s into the 1950s. Director Phil Karlson had a long career making low-budget movies in almost all genres, a few of them westerns. He is remembered for his gritty crime films in the 1950s, among them Kansas City Confidential (1952), while his biggest success was the rogue lawman movie, Walking Tall (1973).