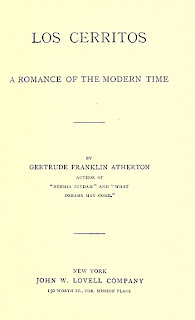 Following on the heels of Helen Hunt Jackson’s early-California romance, Ramona (1884), this novel makes clear in its subtitle that it’s a “Romance of the Modern Time.” Set in the post-gold rush years, it tells a story already familiar to readers of Maria Amparo Ruiz de Burton’s The Squatter and the Don (1885). It concerns the disputed ownership of a former Spanish land grant.

Plot. Settlers have put down roots on a large tract of land in Central California believed to be otherwise unclaimed. When a deed owner belatedly surfaces, a wealthy man in San Francisco, Alexander Tremaine, buys the property. He intends to drive off the squatters and build a big country home for himself.

Visiting the former 50,000-acre rancho, known as Los Cerritos, Tremaine meets and falls in love with a 17-year-old girl, Carmelita Murietta. She is the daughter of the famous bandit Joaquin Murietta and a well-born young woman who ran off with him. Both are now dead, and Carmelita has grown up in the home of an uncle.

Carmelita has befriended the Jesuit priest of the local mission, about whom there is some mystery. She does not know that he left a lover to become a priest and that, unknown to him, she has taken up residence at an isolated house nearby. She languishes there, having given up hope of a happy life in the world outside. Carmelita also doesn’t know that Tremaine is the man who has bought Los Cerritos. Nor does she know that he is already married.

The settlers determine to take up arms against Tremaine, to fight for possession of the land. They are led by a burly giant of a man, Carlos Castro, who attacks Tremaine, breaking his wrist and putting a knife into his shoulder. Ready to finish him off with a pistol shot, he discovers that Carmelita has his gun, and he flees when she threatens to shoot him.

Tremaine decides in the end to avoid further confrontation with the squatters, even as they surrender to the sheriff who comes to evict them. Instead, Tremaine offers them a deal. They can keep their land provided they work hard and are truly productive, showing some ambition instead of passing the time in drinking, gossiping, and idling.

The unpleasant Mrs. Tremaine objects. She has plans of her own for their 50,000-acre get-away, and she doesn’t intend to share it with any but guests of her own choosing. Atherton handily dismisses both her and the bothersome Castro by having them trampled in a cattle stampede.

Romance. Carmelita is the romantic heroine of the novel. She has the intelligence and sensibilities of her mother and the independence and social conscience of her father, who robbed only from the rich. A child of Nature, she gravitates to the old growth forests on the mountainsides above Los Cerritos.

Tremaine, rich with inherited wealth, is a lost soul in the world. Money can’t buy him love. Something of a dreamer, he scorns the materialistic world of the well to do and yearns to escape from it. He is immediately taken with the simplicity and honesty of Carmelita. With her, for the first time in his life, he feels he has found a companion.

The priest and his one-time sweetheart, Geraldine, are another story. The romance in their case is that of hopeless love, the carnal vs. the spiritual. Each suffers miserably as the priest’s religious vows separate them forever. There’s no happy ending for these two. Exhibiting more common sense, Carmelita observes that love of God is a poor substitute for love of another, especially when a person is young.

Villainy. By all rights, Tremaine should be the villain of the story, and we take him to be so through the first half of the book. That’s before we actually meet him and discover that he is not an ogre as he’s been pictured by the people of Los Cerritos. What Atherton offers instead is a glimpse into the heart of a man who has only been cast as a villain.

A foil to well-born and high-minded Tremaine is Carlos Castro, the vaquero in chief on a Los Cerritos ranch. Though a horse thief, he is adored by his comrades. Among his neighbors, he is so well liked for his “enormous vitality” and his “rude magnetism” that they always acquit him of any crime. So full of energy, he is like a volcano waiting to erupt.

The padre is yet another foil. Like Tremaine, he despairs of finding happiness in life. The difference between the two men is that Tremaine is not bound by vows to the Almighty. He can find a way to do some good with his wealth, and he can enjoy true love.

White and nonwhite. Intolerance in the novel is a mark of a character’s ignorance and cold-heartedness. Mrs. Tremaine has top honors in this regard, as she scornfully dismisses the squatters as “native Californians and half breeds,” “ignorant Irish emigrants and dirty natives.”

Arriving at Los Cerritos, she is offended by living conditions at the camp where the evicted settlers have been living and complains that they are not even “picturesque.” The narrator observes that with her outraged sense of refinement “she had the latent vulgarity of all cold natures.”

Style. There is poetic indulgence in much of the description of landscapes and setting. The ranchland that is Los Cerritos is breathlessly described: “Those fairy-like hills, golden in autumn, in spring so rich and so lavishly colored that their dew drops surely held imprisoned the rainbow’s jeweled hues,” and so on.

Emotions run under the surface of much of the novel, and there is high drama as Castro stirs up the settlers to fight Tremaine. But a scene between Geraldine and the padre spills over into weepy melodrama.

Wrapping up. Gertrude Atherton (1857-1948) was born in San Francisco. Over a writing career that spanned 60 years, she produced a great many works of fiction. Her family being averse to her writing, she published her first novel in 1888 under an assumed name, Frank Lin. Many of her novels traced the developing culture of California, from the Spanish colonial period to the modern world.

A young widow, Atherton traveled in Europe and lived for a time in New York and London, settling again in San Francisco. There she was a notable presence among the city’s literati. Several of her novels and stories were made into films. A list of her books can be found at wikipedia.

Los Cerritos is currently available online at google books and Internet Archive, and for kindle and the nook. For more of Friday’s Forgotten Books, click on over to Patti Abbott’s blog.
Tweet

Coming up: Gertrude Atherton, Perch of the Devil (1914)