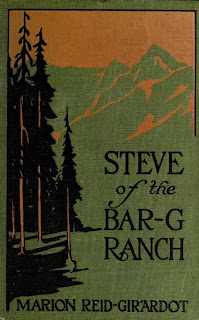 Never mind the subtitle of this novel, which promises “A Thrilling Story of Life on the Plains of Colorado.” Steve of the Bar-G Ranch is for the most part a ranch romance. Steve is a handsome young cowboy who falls in love with a pretty young thing from back East and wins her heart and hand despite the obstacles that divide them.

Plot. Steve Gardeau is top cowboy on the family ranch 25 miles east of Denver. His foster brother, Blackie, has competed with him since boyhood for every honor a young man might desire, including the interest of any pretty girl. As congenial and even-tempered as Steve is, Blackie is resentful and vindictive. When Steve catches the eye of the schoolteacher, Miss Little, Blackie is furious.

For Miss Little, Steve is the pick of the lot, and she makes every effort to wring a marriage proposal out of him. But he’s not so easy to catch, especially as a summer visitor from New York, Eloise Parker, shows up. Miss Parker has welcomed the opportunity to get away from a pesky suitor, the millionaire, Reggie Van Rennssler, but he insists on accompanying her on her western adventure.

Steve is undaunted by the presence of this other man. Meeting Miss Parker at a Fourth of July picnic, he quickly gives her all his attention. She is flattered and allows him to befriend her. Snobby Reggie gives up and goes back to New York, trusting that she will eventually come around and marry him for his money.

Romantic feelings grow between Steve and Miss Parker, and emotions reach a peak during a camping trip with friends in the Rocky Mountains. Caught in a snow squall at a high elevation overlooking a scenic view, they confess their mutual love and agree to marry.

After that, all goes downhill for a while as Miss Parker is called back to New York by her ailing mother, who refuses to approve of the marriage when she learns of it. Steve takes the news hard, and Miss Little goes to work on him again, hoping to get him on the rebound.

Business takes Steve to Boston, where he happens to meet Miss Parker and falls madly in love all over again. Back in Colorado, he joins a hunt for horse thieves, and when they are found, Blackie is discovered among them. In an exchange of gunfire, both Steve and Blackie are seriously wounded and taken to a hospital in Colorado Springs, where each clings to life.

Learning of the incident, Miss Parker is overcome and falls into a faint. Startled, her wheelchair-bound mother leaps to her feet and experiences complete recovery from 15 years of paralysis. Eager to see the West, she accompanies her daughter to Colorado, and finding her bed-ridden lover, Miss Parker attends his return to health.

Falling in love with the West, her mother gives her blessing to her daughter’s marriage to a cowboy. Meanwhile, Miss Little settles for second best with Blackie. Though under guard for his part in the ring of horse thieves, he escapes with the help of Steve, who puts him and Miss Little, dressed as sisters of mercy, on a train to Mexico.

Romance. Maintaining appearances is more often than not the order of the day in matters of romance.  Miss Parker observes that it is better to keep a man guessing about a woman’s true feelings. Once a man thinks he’s won her, he takes her for granted and “considers the matter settled for life.” By comparison, were he to win a fortune, he would never let it out of his thoughts.

To hold a man’s interest, you can’t let him suspect you like him or, worse yet, that you are out to snare him. He will quickly get cold feet, lose interest, or get resentful that he is not doing all the pursuing. Thus, as Steve becomes increasingly flirtatious, with “half-serious, half-jesting declarations of love,” Miss Parker falls into a state of confusion, not wanting to appear to encourage him.


Character. Steve is another version of The Virginian. Physically he comes from the same mold. Miss Parker observes that people automatically like him. A typical comment about him comes from another cowboy: “Steve is usually equal to any emergency.”

While his foster-brother Blackie is easily as gifted in the skills of cowboying, it is Steve who gets the lion’s share of the applause. The difference between them is Steve’s sanguine personality. By contrast, Blackie has a “brooding, vengeful disposition.” He gets his name from the color of his hair, which is straight and black, “like an Indian’s.”

Women. The women in the novel are a mixed lot. Miss Parker is a winner. In her first conversation with Steve, she is remarkably candid with him, meaning exactly what she says. She makes a welcome contrast to the flatly manipulative Miss Little, who never utters a word that betrays her actual intentions or motivations.

Miss Little is a shallow and scheming young woman and, though pretty, far from likable. She has a number of annoying traits. Despite the fact that she is a schoolteacher, she confesses that she dislikes children, “the horrid grubby little things.” She dissembles and flatly prevaricates, as the need arises.

Cowboys. Early western writers are mostly in agreement about the impression made by the cowboys of the open range. Practicing a “hazardous occupation,” Reid-Girardot says, they possessed a “refreshing boyishness, which enabled them to look death in the face with cheerfulness, and when they met a maiden to their liking, to woo her with impetuosity.” They were “gallant riders who with jingling spurs and flapping sombreros” dashed about recklessly on their horses living “strenuous, busy lives.”

Reid-Girardot devotes a couple of chapters to the cowboys’ work and their working conditions. In the heat of a summer day, while on roundup, they are plagued with clouds of tiny gnats. Later, in the night, rain finds them. Steve and another cowboy, “bunking together” on their ground tarp, wake to find their bedding flooded. Steve crowds in with another set of cowboys, all of them wetly wedged together.

When not at work, cowboys pass the time in wrestling and other physical contests. A horse race generates excitement and furious wagering. Hunting with dogs, they like to go out on the prairie after coyotes, sometimes killing one or two. At an outdoor gathering, someone provides a keg of beer, and they pass the time with games, showing off rope tricks, and seeing who can tell the tallest tales with the biggest lies.

Wrapping up. Besides two novels, Steve of the Bar-G Ranch and Red Eagle of the Medicine-way (1922), Marion Reid-Girardot has left hardly a trace of herself. A brief bio in Arizona in Literature (1934) identifies her as “once of Arizona” and currently living in Manitou, Colorado. She is described as the writer of “numerous short stories and articles.” Her stories are said to range from “Sunday school juveniles to modern Magdalenes and westerns,” and she was teaching a short-story writing course by correspondence.

Steve of the Bar-G Ranch is currently available online at google books and Internet Archive, and for kindle and the nook. For more of Friday’s Forgotten Books, click on over to Patti Abbott’s blog.
Tweet