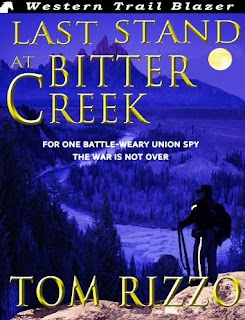 Tom Rizzo has taken three unsolved mysteries from the 1860s and woven them into a story of espionage and criminality. His central character is an innocent man, just doing his job, who becomes a wanted fugitive.

Plot. Grant Bonner is a young Civil War veteran who has been a spy for the Union in the Confederate South. As the war ends, he is put on the trail of a colonel in the Union Army suspected of engineering the robbery of a gold shipment. Accompanying five heavy coffins in the express car of a westbound train from Cincinnati,  Bonner is surprised by a derailment that leaves him running for his life from thieves.

Thus begins a complex story extending over several years and told from the point of view of 20 or more characters, including men who are plotting against Bonner. Eventually working with him to unmask the villain they’ve both been after is a young black officer, David Webster.

The story takes them to Bitter Creek, Wyoming, where Bonner is cowboying under an assumed name for reasons I’ll leave it to readers to discover. Under suspicion is an ambitious local rancher who has acquired a big spread and seems to have enough money to buy up most of the town. In a plot twist that involves the theft of a valuable document, he is about to become even richer.

Character. Grounded as it is in actual though little-known events, the story is a departure from what is thought of as the “traditional” western. Characters come and go, and new ones are still being introduced in the final chapters. While Bonner is the main character,  he is absent from about a third of the book, which has an interesting effect.

He is often unaware of developments that the reader has already been informed of, and his welfare is far more precarious than he knows. On the other hand, his training as a spy comes to his aid as he thwarts an ambush, studying the lay of the terrain and divining where a shooter might be hiding if he cared to.

Curious is the absence of a single romantic interest for Bonner. Instead, there is not one but three women who figure into the plot, each of them taking a shine to him and helping him out of a jam. Each teases a reciprocal twinge of interest from him, but at the end he is still on his own and apparently OK with that.

There’s not a lot of back-story for Bonner, but Rizzo does describe a boyhood incident that casts a shadow over him. A young friend was killed one day as the two of them handled a loaded revolver. Feeling responsible for the boy’s death, he is haunted years later, especially as he feels angry impulses to use his own gun.

The most interesting creation is the black officer, David Webster. Outside of David Cranmer’s U.S. Marshal, Gideon Miles, it’s unusual to find an African American in a western story. Webster is a sharply intelligent man and in full possession of his authority, despite any prejudices working against him.

For villains, it’s hard to beat Marcus Steele, who is not just a greedy man with a criminal mind. He has a contempt for other people, including his own wife, that is blood curdling. Steele is the kind of villain often found in early westerns, an ambitious man intent on getting rich quick, by any means, and entertaining schemes to buy his way into public office.

Wrapping up. Rizzo has constructed an intricately contrived western tale. The shifting points of view bring even minor characters to life during their brief moments in the narrative. The train robbery and Bonner’s final confrontation with Steele are nicely suspenseful. Last Stand at Bitter Creek is currently available at amazon and Barnes&Noble and for kindle and the nook. You can learn more about Tom Rizzo at his website.

Tom Rizzo has generously agreed to spend some time here today at BITS to talk about writing and his novel. I’m turning the rest of this page over to him.

How did the idea for Last Stand at Bitter Creek suggest itself to you?
I read a short paragraph about the first peacetime robbery in the US taking place in North Bend, Ohio, just outside Cincinnati. If you Google first “train robbery”, you’ll find the Reno Brothers robbed an Ohio & Mississippi train October 6, 1886—the first time a “moving” train was stopped and robbed. The Pinkertons finally solved the case.

But, the truth is an Ohio & Mississippi train was robbed May 5, 1865, and derailed outside North Bend. I wrote an article on it that was published by Wild West Magazine in October 1995. This case was never solved. A few years later, I thought since the case was never solved, what if the train was transporting a valuable cargo no one knew about.

Is the published version similar to how you first conceived it or somewhat different?
It is somewhat different. A rough chapter-by-chapter outline got me started, but then new elements came into play and I made major changes along the way.

What sort of research was involved in writing the novel?
Quite a bit of research, not only about the historical incidents I included, but about that particular period of history as far as how people lived, worked, what they wore, how did they travel, what did they eat. A lot, of course, was never used but was necessary to know to get a sense of time and place.

Talk a bit about editing and revising. After completing a first draft, did it go through any key changes?
It probably took me nine months to write the first draft. And it underwent several revisions. The biggest one, ironically, was after I sent it to a professional editor. She made excellent suggestions and pointed out some pitfalls, and made the appropriate edits, and put it to rest for a couple of weeks to let it marinade a little.

At that point, it was 80,000 words. When I returned to it, read it again from beginning to end, and carved out about 10,000 words that I thought slowed things down too much.

Was there anything about the story that surprised you in the writing of it?
How difficult it was to write a novel with such an involved storyline. I also discovered how much fun I had at creating different characters, slipping into their skin, and trying to think and act as they might.

What parts of the novel gave you the most pleasure to write?
I enjoyed so many parts of it, including the interplay between the newspaper publisher and his daughter... the characters who played the role of lawmen... the strength of the three major female characters... the pairing of Bonner and Webster... the evil and single-mindedness of the antagonist... and David Webster’s reaction to the shootout he was involved in.


Since the story is based in part on actual historical incidents, were any parts of it more challenging than others to make plausible for readers?
The most challenging, I believe, was creating credibility surrounding the stealing, transportation and fate of the stolen gold.

Were you thinking of any previous western writers while writing this one?
I purposely tried not to do so because I didn’t want to feel I was “borrowing” any techniques or ideas. I had read a lot of Louis L’Amour, Matt Braun. Elmore Leonard, and a few others a couple of years before I attempted to write a novel.

How did you go about deciding on the novel’s title?
Last Stand At Bitter Creek was about the fifth or sixth title. All the others were a bit too generic. I finally decided that perhaps a title that worked best would be one that would suggest the turning point or climax of the story. It seemed to work well in this particular case.

What were the creative decisions that went into the novel’s cover?
The only thing I told the designer was I wanted a cover that—if possible—reflected a journey, and provided her with a synopsis. It was her suggestion to include a sub-title. I always thought of subtitles only for nonfiction, business books in particular. But, I find a subtitle can work well with fiction and even help clarify and communicate the essence of the story.

Talk about the making of the video for your book.
The designer who did the cover also created the trailer. She said her biggest challenge was locating footage to reflect the particular time period in the book—just after the Civil War, late 1860s. I wrote the script with the advice: keep it short and to the point with the goal of keeping the entire trailer under a minute-and-a-half. I think it runs about 1:15 front to back.

What have been the most interesting reactions to the novel?
A couple of things struck me. One reader described it as a classic Western with a twist that addresses a larger theme in regards to greed and power. Others remarked about the pace and the twists and turns. Another compared it to a blend of Bourne Conspiracy and a Louis L’Amour adventure.

Is there any chance that readers might expect to see a future novel about your character David Webster?
Yes. I’m in the process of outlining a story where Grant Bonner and David Webster join forces again.

For readers who like your work, which other writers would you recommend to them?
I read so many different things, but I’m making a deliberate attempt to read those authors I’ve just been learning about since joining this Western “fraternity,” so to speak. Among them: Jory Sherman, Troy D. Smith, Matthew Pizzolato, Cheryl Pierson, Phil Truman, Chuck Tyrell, Phil Dunlap, James Best. And, other genres as well. Authors such as Robert Ellis, and Philip Margolin.

What are you reading now?
The American West by Dee Brown, The Best of Dee Brown’s West, An Anthology, a couple of books featuring Robert Parker’s “Jesse Stone” character, The Brass Verdict by Michael Connelly, The Defector by Daniel Silva.

What can readers expect from you next?
Another Grant Bonner adventure. He and David Webster will be back on the trail in pursuit of another treasure.

Anything we didn’t cover you’d like to comment on?
I believe we hit all the high spots. Thanks so much for the Q&A, Ron. Usually, I’m the one asking the questions. This was a nice change of pace.