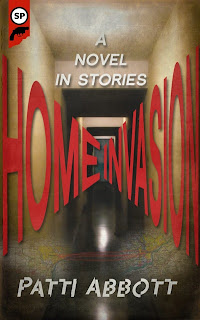 I have been waiting for Patti Abbott to write a western to review here at BITS, and her new novel, Home Invasion, gives me something to talk about until she does. I have marveled often at Abbott’s way of telling a story, and Home Invasion is blissfully both a novel and a short story collection.

There are continuing characters that connect these stories, which extend over a period of time from 1961 to 2005. They are mostly about members of the same family and the people whose lives happen to intersect with them. The way characters find and connect with each other gives the stories their particular twist. They are drawn together by a kind of magnetic pull that matches up their weaknesses rather than strengths.

A woman with a domineering mother locates a hopelessly damaged father, who leaves her in the company of a sleazy storefront preacher. She runs off with a grifter and drifts into alcoholism. Her son teams up with a dubious friend who breaks into houses. One of his girlfriends is cravenly wanton and unfaithful. Another kidnaps a baby to justify the child support he’s been paying while he’s doing time. And so on.

There’s a bit of Raymond Carver in these stories, though I did not think of him while reading them. Abbott brings her own wry perspective that examines the lives of marginal people but sidesteps Carver’s pathos. You are more likely to groan than sigh at the ends of chapters as characters extricate themselves from one awkward situation only to create another. Carver’s people make mistakes and don’t get what they deserve. Abbott’s do.

The situations they get themselves into typically involve the telling of lies or half-truths or keeping the truth from someone else. The “home invasion” of the title is a good metaphor for all this. Given the chance, they will transgress boundaries, steal, blame others, and take advantage of other people’s trust.

So when a kidnapped baby does not fool the man who’s been told by his girlfriend he’s the father, she simply skips out on both of them. In another episode, his partner in crime sets up a practical joke that has him believing an elderly woman has been killed.

The dysfunction in Abbott’s families would be painful if it wasn’t also grimly humorous. Probably my favorite sequence in the book (originally a stand-alone story) describes a family’s day at the shore. Two small brothers are left to fend for themselves as their mother finds a bar to get drunk and their father is up to no good, while continually complaining about how much the day is costing him. The final words of that story elicit one of the well-deserved groans I mentioned earlier.

What I enjoy about a Patti Abbott story is the economy of the storytelling and the finely polished prose. Her dialogue is sharp and darkly funny. Nearly everything that happens is unexpected, and while endings are often surprises, they are also inevitable. Her characters are so nicely complex that you want to hear more about them, and this novel does just that.

Patti Abbott has generously agreed to spend some time here today talking about writing and her novel. I happily turn the rest of this page over to her.

How did the idea for Home Invasion suggest itself to you?
I have been writing about this family, the Slack, Wist, Batch family, for as long as I’ve been writing. The first story I wrote—and it was before 2000—was the one about the burglary. I was still in a writing class then and my teacher, Chris Leland, suggested I submit it the annual short story contest that the International Auto show ran. It got awarded runner-up prize (a free pass to the show!!), which was surprising since it featured no cars.

After that I moved backward rather than forward with this family. It was easier for me to write short stories when I knew the characters. Or at least knew where they came from. The characters themselves mostly popped up although Billie is largely based on a friend, who spent her childhood trying to locate her father. Her mother was essentially Kay, and her grandmother, Adele.

But after the first story, nothing else was based on her actual life. She never found her father despite all those hours looking for him in telephone directories, but had a pretty flamboyant life herself. She did fashion wigs, and in her booth in Gimbels two men nearly had a shoot-out over her. Don’t know why I didn’t put that part in.

Is the published version similar to how you first conceived it or somewhat different?
This novel in stories almost had an agent a few years back. But he decided an unknown writer could not sell a book laid out like this. When he looked at it, it had two additional stories. One took place before any of the ones in this collection and concerned Kay, Adele and Billie and a possible pedophile. I thought there was enough dark stuff in this book without beginning there.

The other story was about Charlie’s attempt to have a relationship with a mobster’s daughter and Ron’s interference. I think I allude to this woman slightly in here. It felt too long, and those were the stories most easily excised. Although Adele got to really show her stripes in that first one, and I may find a place to publish it yet.

Talk a bit about editing and revising. After completing a first draft, did it go through any key changes?
I had pretty much edited this collection to death before Snubnose got it because of the near miss with the agent, so SP had only one major suggestion, and it was a terrific one. It’s in the final chapter and concerns the fate of Melissa. I had intended for her to take the deal and disappear but Brian suggested something else. He wanted the novel to end bigger and he was right.

I remember once reading the story of the day at the shore, and I recall it differently. Is it my faulty memory or is the novel’s version actually different?
It was very similar. I think this one was a bit quicker. If left to me, I will pare every story down to 2400 words. At one point, I had a much longer argument about the best way to get to AC from Philly, but who cares other than people from Philly. These characters have been with me so long that I can hear the entire conversation they would have in my head, and it’s hard to know what you can leave behind and what furthers the plot and the characters.

Was there anything about the novel that surprised you in the writing of it?
I have actually written two more traditional novels. In Home Invasion, the crutch of having written so many short stories helped. When you write a traditional novel, you have to move the story along without big moments at least some of the time. In this book, every story has a distinct and slightly different setting and features some sort of crime. I was able to center each story around that change of place and crime.

What parts of the novel gave you the most pleasure to write?
Whenever I can sneak humor in, it gives me great pleasure. I loved the character of Kay, the most narcissistic woman in the world, and yet she’s funny. I liked the ending—when the most unlikely family finally forms. And the outing to the seashore, though painful, was fun to write. Someone said kids see everything more clearly than adults and yet interpret it incorrectly. I think that is true of Charlie in this story.

Were there any story ideas that didn’t make the cut?
Besides the two I mentioned, I have since written stories about Billie several times. I call her Christine, but she is an amalgamation of Kay and Billie.

Were you thinking of any other writers while writing this one?
I think I do drift into copying styles of other writers if I am not careful. And since these stories were written over a decade, I can see traces of writers who have influenced me.

How did you go about deciding on the novel’s title?
The story of Charlie and Ron’s burglaries was originally called “Home Invasion.” And when I thought of it later that’s what the book was really about—how our homes are invaded by unstable parents, predators, con-men, war, rapists, blackmailers, etc. We may think there is safety inside our home, but things impinge on it with great and horrible regularity.

What were the creative decisions that went into the novel’s cover?
The cover is pure Eric Beetner. He wanted to show how dreary their world was, more like the hotel in Barton Fink than any regular house. But he also used a map beneath it since stories take place in several states. My eye isn’t great so I left it to him.

What have been the most interesting reactions to the novel?
A good friend asked me how did I know about people like this? How had I hid this secret life beneath the façade of a professor’s wife. What secrets have I been hiding? It is always hard to convince people that the story is not about me. I know people from this milieu, but it is essentially an imagined group of people in an imagined world.

For readers who like your work, which other writers would you recommend to them?
I love so many writers it’s hard to know where to start. Alice Munro, Raymond Carver, Patricia Highsmith, Charles Willeford, Stewart O’Nan, Ian McEwan, Megan Abbott, Tana French, Ken Bruen, Lorrie Moore, Mary Lavin, Sandra Scoppettone, Laura Lippman, Larry Watson, Philip Roth, Richard Ford, Charles Portis. Ask me tomorrow and the list will be entirely different.

What are you reading now?
I just finished A Faithful Place by Tana French and am reading Schroder by Amity Gaige, about a father who kidnaps his six-year old daughter when his double life threatens his ability to share custody.

What can readers expect from you next?
I probably will try to get the second of those two novels out there in some fashion. The first, I have concluded, is just too dark. When a friend who likes and reads all my stories said the protagonist was just too unlikable to center a book around, I had to conclude she was right.

When, if ever, do you think we might get a western?
I would love to do a western. I wrote one short story called Pox, which I think I could work into a book. But the research involved scares me. You western-lovers could smell out a fake from a mile away. Just doing Pox took me months of research about that era in Wisconsin, the history of small pox, German immigrants to the area, life on the prairies and so on.

Anything we didn’t cover you’d like to comment on?
For beginning writers who have the hope of writing a novel, I would like to offer the advice to not begin with short stories. Or if you do, get loose of it quickly. Just dive right into a novel so that is the format that’s comfortable to you. The two forms are very different and you begin to see the world in 3000 word tales.

Thanks, Patti. Great having you here. Every success.
Tweet