Gertrude Atherton, Perch of the Devil (1914) 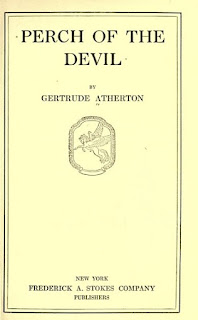 A New York Times reviewer called this novel “crude, shrill, unscrupulous, splendid,” which no doubt pleased its author. Atherton seems to have been bent on twisting conventional literary expectations by its ear. This novel is a wry and ironic take on all manner of romantic notions about love, money, and power. Its in-your-face title comes from the name given by early prospectors to the mining camp that became Butte, Montana, where the novel is set.

The story is “western” in a modern sense of the word, for it mixes a favorite theme of early western fiction—mining and sudden riches—with a story of two wealthy socialites. Both women are married, but one loses her heart to the other one’s husband. So it is a love story, too, played out in elegant gowns, well-furnished drawing rooms, and the fashionable watering holes of Europe.

Plot. Gregory Compton is a man obsessed with extracting a fortune from the earth. Son of a rancher, he is forced to interrupt a course of study at the School of Mines in Butte when his father dies. After a time, he excavates a rocky hill on the ranch, believing he will find gold. Instead, it is rich with copper, and he soon becomes a new Copper King.

His wife, Ida, born into poverty, rises swiftly from rags to riches. Embarrassed by her unpolished speech and manners, Compton hires a tutor to act as Henry Higgins to her Eliza Doolittle. The tutor so enrages her with his snobbery that she pitches him out a window. Taking his place is the other woman of the story, Ora Blake, who befriends her and, by her own example, helps Ida learn to be a lady.

Ora grew up in the lap of luxury but was left almost penniless when her father died. She has married one of her father’s employees, a lawyer. A lover of books and the arts, she is a sleeping beauty, content with her modestly secure life and a little agoraphobic. Meeting the energetic Ida, she is amused an entertained by her, and like true opposites they quickly bond.

All Ora needs to come out of her long dream-like seclusion from the world is an infusion of capital. This occurs in the form of an old mining claim of her father’s long thought worthless. A short walk from Compton’s claim, it is discovered to have deposits of copper ore as well. She quickly finds herself a well-to-do woman again and getting more so.

Romance. Wealth offers Ora a degree of independence, and she realizes that she is married to the wrong man. After a moonstruck meeting with Gregory Compton, she becomes convinced that the two of them are soul mates. During a year in Europe with Ida, she falls deeply into an imagined love affair, writing him letters that she never sends.

We know from page one that there’s not a romantic bone in Ida’s body. Gregory, a handsome rancher, is a “catch” and little more to her. It hardly matters that he gives all his time to his mine. She is fancy free, on a grand tour of Europe, buying clothes and socializing with the titled and the upper crust.

When the two women return to Montana, Ora informs her husband that she wants a divorce and secretly sets about separating Ida from her husband. Gregory, it turns out, has been fostering a smoldering attraction to Ora. It looks like the two of them will become the answer to each other’s dreams.

But Ida isn’t about to give up Gregory. And it turns out that she is really the better match for him. His true love is really his mine. Only the sensible, rational, and independent Ida can grant him the freedom to give himself completely to his business interests. With his millions, she graces his achievements by being the grand dame of Butte society.

Women. You gather that Atherton does not waste a lot of sentiment on women as a gender. When Gregory tells Ida that she is “an extraordinary woman,” she scoffs and says “the extraordinary woman hasn’t been born yet.” Like men, such a woman would be fully engaged in the world and unable to live on love alone.

Women’s weakness, Ida argues, is their fairy-tale wish for a Prince Charming. Despite appearances “they are just one perpetual shriek for the right man to come along.” When women achieve true independence, she says, “they will be just as happy without men as they now want to be with them.”

Character. One senses a bit of Ayn Rand in Atherton’s apparent admiration for Gregory Compton. He has both brains and strength, and he has a kind of courage that cares little if he’s considered arrogant. The big mining trust, Amalgamated, comes after him when he seems to have found a new Anaconda. He fights them tooth and nail, outwitting them, refusing to knuckle under to the pressure that their billions can bring to bear on him.

Meanwhile, he looks for other investments and masterfully converts a large ranch into farmland by diverting a mountain stream for irrigation. Raising the market value of the land with his improvements, including a new railroad, he turns over a substantial profit. To his credit, he is able to stifle his romantic impulses. Though he may return Ora’s impassioned kisses, his idea of a good time with her is sitting together and talking intimately of ores. A true soul mate for him is an encumbrance.

Is it a western? This is a long book, clocking in at 373 pages, with not a single illustration. It has aspirations to be taken as serious literature, and over the years Atherton has invited comparison to Edith Wharton. The New York Times reviewer puts her in a league with Joseph Conrad. Certainly, read in the company of popular literature set in the West, a novel like Perch of the Devil seems much too urbane and cosmopolitan.

Still, it easily joins the sub-genre of mining novels from the period, launched some 30 years before with Mary Hallock Foote’s The Led-Horse Claim (1883), reviewed here a while ago. And it captures a good deal of the social spectrum of Butte, from its “sporting” establishments to its service industry to the wealthy mansion-owners. The novel certainly wants to be “western” and deserves to be read for that reason.

Wrapping up. Gertrude Atherton (1857-1948) was born in San Francisco. Over a writing career that spanned 60 years, she produced a great many works of fiction. Her family being averse to her writing, she published her first novel in 1888 under an assumed name. Many of her novels traced the developing culture of California, from the Spanish colonial period to the modern era.

A young widow, Atherton traveled in Europe and lived for a time in New York and London, settling again in San Francisco. There she was a notable presence among the city’s literati. Several of her novels and stories were made into films, including Perch of the Devil in 1927, for which she shared writing credits with Mary O’Hara, author of My Friend Flicka (1941). A list of her books can be found at wikipedia.

Perch of the Devil is currently available online at google books and Internet Archive, and for kindle and the nook. For more of Friday’s Forgotten Books, click on over to Patti Abbott’s blog.
Tweet