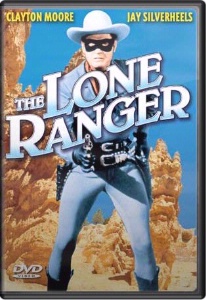 As a recent prize winner at Laurie Powers’ pulpwriter.com, I’m inviting everyone to join in an appreciation of the 1949 film The Lone Ranger. It’s one of the four movies in the box set of DVDs that came from OutWest, Bobbi Jean and Jim Bell’s well-stocked online western store.

This 69-minute black and white film, made for TV, recounts the legend of how the Lone Ranger was left for dead after an ambush of Texas Rangers by the outlaw Cavendish gang. Lured into a box canyon, they die one by one in a hail of bullets – all except for one wounded man, John Reid.
Reid is rescued by the buckskin-clad, pinto-riding Tonto, a Mohawk Indian (wandering far from home). Tonto was once rescued by the same John Reid when they were boys. Tonto returns the favor by nursing him back to health. Reid always either has his face covered or is turned away from the camera, so we never get a good look at him.
He stoically grieves for the loss of the brave men who died, especially his brother, Dan, who was leading the Rangers at the time of the ambush. After Tonto has buried the bodies, Reid vows to continue fighting lawlessness on the frontier until the last outlaw is found and punished. To hide his true identity, he wears a mask, and while he will use his gun as needed, he will never shoot to kill.
This vow is put to the test almost immediately, as the half-breed guide who led the Rangers into the trap is still alive and determined to kill Reid. The renegade’s rifle is shot from his hands, and he eventually loses his footing and falls from a canyon ledge to his death. Problem solved.
Next they rescue a beautiful white stallion from an attack by a wild beast, and the animal is so grateful that it decides to become the Lone Ranger’s horse, Silver. It’s fun to hear the Lone Ranger again calling him “big fella,” then leaning forward in the saddle to pat him on the shoulder.
The two men then set out to bring to justice the outlaw Cavendish, who has been taking over a frontier town by killing off all the leading citizens and replacing them with men from his own gang. (A plot device that only a 10-year-old kid in 1949 wouldn't question.)
There is much riding to and fro and gunfire, men being tied up, fistfights, and men being held at gunpoint. The Lone Ranger also finds time to reopen an old silver mine and decides to use only silver bullets in his gun, as a sign of his pure intentions to bring law and order to the frontier for all peace-loving folks.

Eventually the gang is rounded up and tossed in jail. As soon as this mission is accomplished, the Lone Ranger and Tonto ride out of town. But not before someone says, “Who was that masked man?” and someone else replies, “I don’t know his name, but he’s called The Lone Ranger.” Music rises and the Lone Ranger calls out, “Hi-ho, Silver away!”
What a lot of fun this was to see these two actors, Clayton Moore (1914-1999) and Jay Silverheels (1912-1980), in their prime. Their voices are so familiar from my childhood, and also the snatches of classical music in many of the scenes. Sounds like it could all be from “The William Tell Overture.”
Having not paid very close attention to their performances when I was a kid, I was surprised by how expressive Moore’s face was, even though mostly covered with that mask. His eyes were alive and his mouth often wrinkling into a quick smile or showing determination. His trademark wooden voice may have been flat, but it had the manly depth that fascinates boys before their own voices change.
Jay Silverheels, of course, has to speak those stereotypical Injun lines that always start with “Me” instead of “I.” But he is a fine physical presence, with a striking face that makes up for the anonymity of the masked Moore.
The relationship between the two men harks back to James Fenimore Cooper (1789-1851), whose Natty Bumpo and Chingachgook are life-long defenders of right against wrong. This theme of cross-racial male bonding in American fiction was noted by Leslie Fiedler in a famous essay about Huckleberry Finn and the black slave Jim.
Seen from a Native American point of view, it’s easier now than it was in 1949 to see how the Lone Ranger is always giving orders to Tonto. Once the Lone Ranger is back on his feet again, there’s never a question about who should naturally be in charge. Native American writer Sherman Alexie has described his reluctance to identify with Tonto, and the subject comes up in his collection of stories, The Lone Ranger and Tonto Fistfight in Heaven.
From a historical perspective, the Lone Ranger’s outfit is more than a little inaccurate. As the contemporary renderings of Texas Rangers on this page show, he would have had a soft-brimmed Stetson hat, facial hair, and loose-fitting clothes, with a coat and vest. He would also have carried a rifle.
Hard to say about Tonto. He’s probably overdressed, considering the location. The Texas tribesmen tended to go shirtless. Jay Silverheels, by the way, was in fact a Mohawk Indian, and came from a tribe in Canada.
In this particular Lone Ranger movie, racial prejudice figures into the plot. Sent to town to get the sheriff, Tonto is first dismissed as an unwelcome intruder as the lawman is holding forth on his career to a bunch of bystanders. Later, two of the villains threaten him by giving vent to some anti-Indian remarks.
I don’t remember if this was a common occurrence in the series. What the writers seem to have in mind is to let us enjoy the irony of dim-witted white men unaware of Tonto’s superior intelligence. Tonto, of course, bites his tongue and doesn’t disabuse them of their misconceptions.
Anyway, it was fun hanging out for a while with these old boyhood heroes. If you’d like, you can add the movie to your own DVD collection. There’s a copy still on the shelf at OutWest.
Image credits: wikimedia.org
Coming up:
Posted by Ron Scheer at 5:03 AM