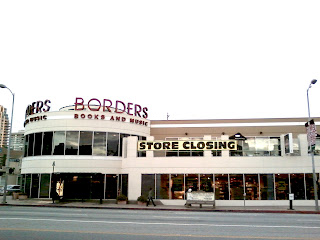 Returning from an afternoon walk on Saturday I looked across Westwood Blvd and saw this banner over the front of the Borders store in my neighborhood. I'm not a big bookstore shopper, but many's the time I have made the short walk over there to shop for a gift or just browse through the shelves.

That it lacked a western section (books or vids) kept me from spending much money. But it was good to know the place was there. So it was with some sadness that I joined the crowds inside scanning the shelves where everything was marked 20% off.

I went through the whole store, upstairs and downstairs, where nothing much caught my eye. My inner English major was both startled and relieved to see maybe 20 shelves in the Lit section completely bare. It was good to know "literature" was finding a home. All the time I was thinking, "You have to take something, even if only as a memento."

Then I got to the 19th-Century History section, and there a voice inside me said, "Here. This is what you want." A half hour later, I walked out with four books: David Laskin's The Children's Blizzard, T. D. Griffith's Deadwood: The Best Writings on the Most Notorious Town in the West, William Leckie's The Buffalo Soldiers: A Narrative of the Black Cavalry in the West, and a so-called "pulp history" by David Talbot with illustrations by Spain Rodriguez called Devil Dog: The Amazing True Story of the Man Who Saved America.

I waited a long time on line to get to a cashier, who turned out to be a new resident from upstate in California, and we joked about adjusting to life in Los Angeles. She even asked if I had a Borders rewards card and optimistically scanned it when I did.

Then I left, with my bag of books, and it was like taking something from a friend who is leaving forever. . .
Posted by Ron Scheer at 5:41 AM