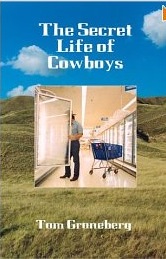 This is a great title for maybe a different book. I expected to find some salty insight into the hearts and minds of cowboys, the men who live and work as agricultural laborers in the modern West. Instead, I found the memoir of a young man from Chicago, still in his 30s, who falls in love with wide open spaces and tries to live out a dream of working with cattle and being a rancher.

The problem is that he is almost totally unprepared for the arduous task of running a ranch and lacks the seasoned philosophy of a man who has experienced lean years, loss, and failure. Taking on a 15-square-mile ranch outside Miles City, Montana, he is quickly in over his head and in a matter of time is surviving on anti-depressants.

Hard winters, hard luck, and lack of experience combine to turn his dream into heartbreak. I seldom read a book that makes me tear up, but this one did, about page 220 when on a September day, he watches as his neighbors gather to buy at auction his machinery and equipment.

Any reader used to the unforgiving seasons of the plains, especially in Montana, might remain dried-eyed at Groneberg's foolhardy and romantic expectations of ranching. But to know him for the tender, ingenuous soul that he seems to be in his book, it's hard to see his failure as anything but the unhappy end of a big-hearted dream.

The secret in the secret life of cowboys remains something of an elusive mystery for Groneberg. Along with him, we observe cowboys from the outside, a fraternity of men engaged in hard, physical labor, masters of skills learned from boyhood, and able to do their jobs in severe working conditions. They're also possessors of a kind of grace beyond words to describe.

Groneberg's book is an attempt over and over to capture this grace in words, always falling a little short, while making ever more vivid the extent of his admiration. He even takes a class in saddle bronc riding in hopes of breaking through this barrier and feeling at least for a moment like a cowboy.

In anyone else's hands, this might all seem over the top, but his love of cowboys comes from a heart that is pure as a boy's. It is easy to allow him his earnest wish to become and be accepted as a man of their perceived character - honest, true, fearless, tough, physically agile, and ethically uncompromised.

At the end of the book, he has not yet forgiven himself for being less than all that, but he has found a place for himself as a hand on another smaller ranch, chastened by his experiences toward a kind of self-respect. Most important, he's loving the life he has found for himself, his wife, and young son.