A. B. Guthrie, Playing Catch-Up

Didn’t know until I stumbled across this book that A. B. Guthrie (1901-1991) ever wrote crime fiction. This one comes fifth in a series of novels featuring Guthrie’s small town sheriff Chick Charleston. Guthrie was 85 when he wrote Playing Catch-Up, after a writing career that started in journalism and flourished in his sweeping historical novels set on the Montana frontier. 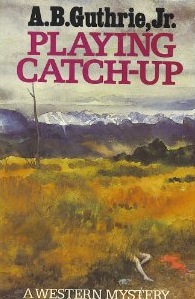 With The Big Sky  (1947) and The Way West (1949) he created his own brand of western storytelling. The grand scale of his books didn’t translate well into Hollywood movies. Still, he’s guaranteed a place in Hollywood history as the screenwriter for Shane (1953).
Most of Guthrie’s Chick Charleston books were written in the 1970s and 80s. I don’t know what the rest are like, but this one is kind of quirky. There are twice as many characters as you’d expect in its 183 pages. We learn little about its first-person narrator, Jason Beard, except that he lives with his mother, is fierce in a fistfight, and is trying to rekindle a romance with an old girlfriend.
The short chapters pack a punch, but the story refuses to build with the usual coherence you expect in crime fiction. A rape and murder has occurred before the opening chapter, and another occurs a short time later. A ruffian living rough in a camper is a prime suspect.
Sheriff Charleston is a common sense kind of public servant, with a relaxed style, who has learned to trust his hunches. A state inspector arrives on the scene to run his own investigation, generally making a nuisance of himself. Deputy Beard, the narrator, is often a passive observer, attentive to his boss.
As the story jumps forward in various unpredictable directions, you expect the basic elements of the mystery to snap into sharper relief in the last third of the book. Instead, it takes some meandering digressions involving the employment of several women at various jobs. And then the mystery kind of solves itself. It ends in fact with another murder, the outcome of which is left hanging.
I liked the characters in the book and the description of rural life in a small western town under the influx of oil field workers. Guthrie sets the story on the cusp of seasons between spring and summer. He also has an ear for wry, clipped dialogue.
Looking back over the book, you realize how much of it has to do with women – partly as objects of lust and rage, but also as rural poor, underemployed and overworked. The first murder victim is a woman who has a second income as a prostitute. Another woman has a live-in arrangement with a man who beats her. Guthrie has her gratefully accepting cast-off clothes and a job cleaning houses.
The men meanwhile get plenty of chances for camaraderie. Mostly single, they’re often gathering around a table for a good meal, or they’re bellying up to the bar for a brew or two. It’s not quite the good life, but it ain’t bad.
You wonder how much Guthrie’s intent was to show the lot of women in the New West, where men are men, and women supposedly like them that way. It sure doesn’t work out like that in this novel.
Image credits: Photo by Ron Scheer
Coming up: Zane Grey, Heritage of the Desert (1910)