I put off reading Zane Grey (1872-1939) until after I’d read about a dozen other western writers from this period. Just to see if I could tell why he became so suddenly and hugely popular. Which is pretty much what happened.

Grey was in his late 30s, schooled as a dentist, and an unknown writer of magazine articles about fishing and baseball. Though he’d been an indifferent student in college, he aspired to follow in the footsteps of Owen Wister, whose novel The Virginian (1902) was a best seller.
But his efforts at novel writing had earned him nothing but disappointment. Not only that. One editor is supposed to have told him he had no talent for writing fiction at all. On his last dime, married, and the father of a little Grey, he threw everything he had into a last ditch effort.
It was a story of adventure on the deserts of northern Arizona, where he'd been the guest of a buffalo rancher in 1907. The defendant in a paternity suit while he was still in college, he also seems to have drawn on a degree of reckless infatuation with women. Once in print, the result was a ripping yarn that flew off the shelves. He had stormed the publishing establishment – both Harper’s and Street & Smith on the same day – and the public had declared him a winner. It was all fame and fortune from then on. 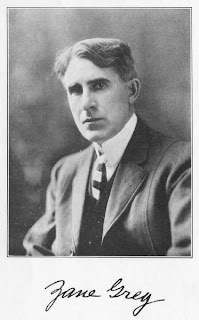 The plot. The novel begins in the desert of southern Utah. It is the 1870s. The central character is a young man, Jack Hare. He shows up suddenly on page one, discovered at the point of death by a Mormon rancher, who has taken to heart the parable of the Good Samaritan.
The rancher, August Naab, is the patriarch of a large family, with two wives and several sons and daughters. His ranch is an oasis in a canyon near the Colorado River, just over the line into northern Arizona.
Hare is a consumptive and needs nursing back to health. Naab puts him to work with an adopted daughter, Mescal, who tends his herd of sheep. Mescal is a half-breed, her father a Spaniard and her mother a Navajo. Out in the open air, Hare not only recovers his health; he falls for Mescal in a big way.
The first 100 pages of this novel are actually kind of tedious. Nothing happens that you can’t see coming a mile away. Then it takes off like fireworks and doesn’t let up until the end. Mescal, we learn, has been promised to Naab’s oldest son Snap, who is no prize. He’s a drinker, a killer, a wife-beater, and has friends among a band of rustlers who work for another rancher, Holderness.
Holderness is the main villain of the novel, moving in on other ranchers’ ranges, stealing their cattle, taking away their water, killing a man now and then as needed. Naab, a god-fearing man, refuses to fight him. He also has high hopes for his wayward son, Snap. Neither of these objectives works out.
While the family celebrates the wedding of Mescal and Snap, the bride-to-be disappears into the night. Snap snaps and the new leaf he’s turned to win everyone’s good will goes right to hell. He takes off and joins up with Holderness against his father.
Meanwhile, Hare is in agony over the absence of his true love, and he travels across trackless wastes in search of Mescal. With the help of her dog, Wolf, he eventually finds her. And they return to the ranch, after a perilous crossing of the Colorado River.
There are more escapes and chases, and a final shoot-out occurs in the Mormon settlement of White Sage, where Hare kills Holderness, and the remnants of the band of cowboy rustlers are either shot or hanged. Finally, the much-delayed consummation of the love between Hare and Mescal takes place with an idyllic wedding. After enough bloodshed, the strongest have survived, and peace and love return to the desert.
What made this work? The formula Grey discovered starts with what he learned from Owen Wister. Wister’s storytelling ranges across a mix of different moods. There are scenes of comedy and humor, touching scenes of sentiment and sorrow, and worrying stretches of tension and suspense. But the memorable moments in The Virginian are the scenes where the stakes are the highest. Such as when the horse thieves are hanged and the Virginian’s friend Steve is one of them.
Grey sticks to scenes like this, stripping his story to its essentials and cranking up the volume. Drama swiftly becomes melodrama. Emotional intensity verges on hysteria. His high-charged scenes anticipate the overacting of silent movies and the gun-blazing covers of western pulps.
Grey’s hero, Jack Hare, is his only point-of-view character. We experience directly his hopes and fears, his disappointments and triumphs, and his growth into manhood. Most important, we live through his high stakes moments with him.
The novel is infused with an overpowering mystique about the West. Hare is transformed by it. Beginning as a hopeless, dying consumptive, he finds that desert living not only helps him recover his health. It ignites his desire to fight and survive. By the end of the novel he has been freed from the narrow constraints of the East and civilization, of which his sickness has been a symbol.
Add to all this Grey’s fearless portrayal of male-female attraction and you get the complete formula. His lovers don’t fool around. When they fall, they fall hard, and for keeps. Professions of love are ejaculations; only propriety keeps his lovers from tearing off each other’s clothes. Meanwhile, when Snap makes his moves on Mescal, Hare is enraged with sexual jealousy. After she disappears, his nights are spent in sleepless agony and he wanders around in a fog of misery.
What I’m calling “the formula” is story and character stripped for action. Once he gets going, Grey never lightens up. One crisis soon follows another. It’s pure escape, a life of adventure as dreamed of by an emotionally precocious fourteen year old.
Wrapping up. There’s more to say about this novel, but I’ll stop here. Grey’s take on the Mormons, for example, is interesting. While he admires their industry, hardiness, and morality, he questions their passivism and their practice of polygamy. Ironically, though Grey was far from being a faithful husband, he subscribes to a one-man-one-woman philosophy in this novel.
The Mormons are on good terms with the Navajo, whose territory lies across the Colorado River. Mescal is the granddaughter of a Navajo chief who appears in the novel. Grey represents the Indians as noble, handsome, and dignified. When August Naab determines to confront the rustlers by force if necessary, a band of Indians joins him in his efforts.
Pulp fans will be interested in knowing that The Heritage of the Desert was serialized in The Popular Magazine in the summer months of 1910. It was filmed three times, a silent in 1924 and as sound versions in 1932 (starring a young Randolph Scott) and 1939.
Image credits: wikimedia.org
Coming up: Dan O’Brien, Stolen Horses
Posted by Ron Scheer at 5:24 AM