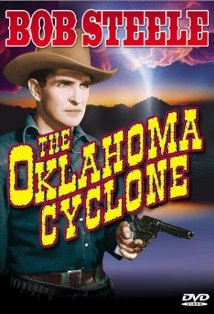 Back again with another classic western I was lucky enough to win at Laurie Powers’ pulpwriter.com. This time, we’re going way back to an early Bob Steele picture, The Oklahoma Cyclone, made in 1930. It’s one of the four movies in the box set of DVDs that came from OutWest, Bobbi Jean and Jim Bell’s well-stocked online western store.