Right off, we’re going to have to deal with the title of this one. Author Ridgwell Cullum (1867-1943) was British born and his spelling of the word “dike” comes from that side of the Atlantic. There’s also a broad swathe of humor in this story about the residents of mining camps, and the place names verge on the satirical: Chloride, Spawn City, and the abovementioned Dyke Hole. 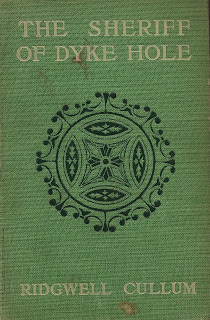 Cullum must have been quite a character. He fought in the Boer War, lived in the Yukon, prospected for gold, and may even have been involved in quelling the Sioux uprisings in South Dakota. By the time he published his first novel in 1903, he’d taken up cattle ranching in Montana.
Novel writing was a big success for him. In a career that spanned over three decades, he published dozens of books. This one was his seventh. Six of his stories were made into films (1917-1923). In England, it’s said that he held his own in popularity against Zane Grey.
Character. Though there’s a sheriff in the title, this novel is not about cowboys and cattle. We find ourselves instead in the mountains of Montana where the local economy is based on silver mining. But compared to other western writers, we learn little about mining itself.
Instead, the novel is a character study of Tombstone Joe, the sheriff of Dyke Hole. He is a dominating, head-strong man who maintains law and order by force of personality, his six-guns, and a good measure of pure bluff. Physically, he’s described as having “a great raw frame, all bone and muscle.”
He has to be all this because he’s Dyke Hole’s last defense against certain chaos. The residents are an unruly, malingering lot – and they’re the “good guys” in the novel. A neighboring settlement, Spawn City, and the surrounding hills are crawling with lawless and ruthless men. 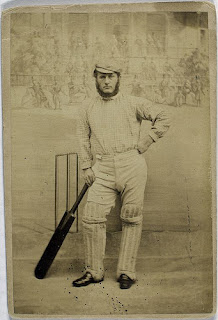 Joe’s methods of law enforcement are unconventional. Early in the novel, there’s a cricket match (baseball has unaccountably not caught on here) in which players participate fully armed. Joe is the referee, and instead of calling a foul, he makes an arrest. But not before one of the players gets shot.
Behind Joe’s rough exterior, however, there beats a sentimental heart. Unknown to anyone else, he looks after the two children of a man he’s sent to the gallows. He’s also not immune to romantic feelings. Though she has highwaymen for friends, there’s a fiercely independent woman known as Six-Shooter Kit who has Joe more than a little weak in the knees.
Cullum puts Joe in a community of men who drink too much and neglect and abuse their wives and children, if they have them. They are a society of misfits and outcasts given to “ungoverned impulse.” What seems to interest Cullum is how a man of certain qualities of character emerges in such an unlikely place. Joe is uneducated and barely able to read and write. Yet he has a highly developed sense of decency and responsibility.
East vs. West. Early western novels often have a tenderfoot character representing the values of the East. A stand-in for the reader, they are full of first impressions about the West and westerners. Here that character is a Brit named Dick Roydon.
The English are often cast as effete and self-important in western novels, proverbial fish out of water. But Roydon is no snob. Virtually lifted out of the gutter at an early age by a benevolent benefactor, he has no class pretensions. He’s decent to the core.
His English decency, however, makes him a poor judge of other men. He is easily fooled into trusting the novel’s villain. Because the man has been civil with him, Roydon takes it as a sign of good breeding and fair play.
Roydon also considers a gunfight “cold-blooded” and “inhuman.” He’d rather settle matters with his fists. But by the midpoint of the novel, he is learning that civilization ends at the limits of the administration of the law. Beyond that limit, human nature asserts itself, and men are ruled by their passions. 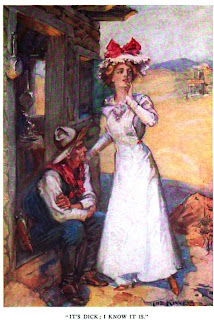 Women. Cullum’s women are like Joe, made of strong stuff. They can work endlessly to make a rude home into a place of warmth and comfort. They are naturally tender and nurturing with children. Wild at heart, Six-Shooter Kit is not immune to this kind of domesticity. Still, Cullum seems to feel that force of character should be equally matched between romantic partners. Kit yields no more to Joe than he does to her.
It’s actually another female character who gets the spotlight in the novel. Jocelyn lost her parents as a young girl and is the ward of the town’s bachelor lawyer, Ripley Boyle. She keeps house and looks after him, though he’s a hopeless drunkard. Somehow, without anyone to teach her, she’s become an excellent housekeeper and cook and has demonstrated motherly instincts. Of marriageable age now, she becomes the romantic interest of Dick Roydon, who falls in love at first sight of her.
For all their strengths, Cullum has stereotypical ideas about women. They are shown in an unkindly light when they attempt to make their domestic skills felt socially. A temperance “missionary,” Sarah Glades, makes a comic nuisance of herself with her efforts to reform the town.
Finally, Cullum can be downright sentimental about women. He shreds all claim to enlightened attitudes on gender when he rhapsodizes on what he believes is feminine nature. A woman’s “crowning glory,” he opines, is the blind faith she places in the man she loves. A man should “go down on his knees and thank God” for such unquestioning trust. Ahem.
Wrapping up. Cullum’s novel takes up several themes we find in western fiction as it was defining itself in the first decade of the 20th century. It is interested chiefly in the aspect of the frontier, where the absence of rule by law and the use of guns for self-protection create a world where force of character becomes the focus.
There’s no lack of conflict and tension in the story, but its strength is not in the plotting. What is memorable about the novel is the character of Joe and the social world of Dyke Hole. Both are rendered in vivid and interesting detail. As a gold-prospecting adventurer himself, Cullum was surely drawing on what he’d seen of the frontier. One suspects that he came across a Sheriff Joe in that experience.
Image credits:
1) Cricketer, flickr commons
2) "It's Dick. I know it is." Illustration from the novel by The Kinneys.
3) Carrie Nation, wikimedia commons
Coming up: Old West saloons
Posted by Ron Scheer at 6:00 AM