Stolen Horses by Dan O’Brien is a new novel set in a small town in the western Nebraska panhandle. It’s kind of a Last Picture Show with an ensemble of characters that would make a good indie movie, like Larry McMurtry’s novel did. 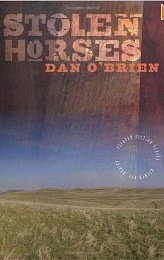 The crux of the story has to do with social and economic shifts that are taking place all over the New West, as outsiders move into long-established rural communities. With their urban ways, they’re fish out of water, like the tenderfoot Easterners in the western novels of 100 years ago.
Difference is, they’ve got money. They don’t have to adapt. And their presence undermines the old order, while disrupting the lives of the lifetime residents. The conflict of values can be a simple matter of consumerism (the new TCBY draws business away from the long-established ice cream shop in town).
Or it can show up in more troubling ways. A new for-profit regional clinic in town serves only those who can afford it. An Indian boy injured in a car crash dies after the clinic declines to treat him. When a local newspaper reporter attempts to get the story, threats are made, and her story is killed before it ever sees print. O’Brien parallels the nastiness of these new intruders to the forcible displacement of Native Americans who lived here for centuries before whites arrived.
It’s great material for a story, and O’Brien carefully sets up the threads of action that lead to a collision in the closing chapters between the old and new orders. In this novel, old ways must surrender to the new. But not before they have left their mark in a blood-spattered field.
More cornhusker fiction. While I’m on the subject of fiction set in Nebraska, here are a few more I’d like to mention. It’s not a long list. Nebraska produces a lot of corn and beef, but novelists not so many.
Willa Cather, of course. Cather is known for her stories and pioneer novel My Ántonia, set on the prairies of southern Nebraska, in the Republican River valley, near Red Cloud. Her novel One of Ours (1922) tells of a young man who finds the pioneering spirit of the early settlers long dead. He is trapped on the family farm in a loveless marriage. He escapes finally to soldier in Europe during WWI. Though ridiculed by Hemingway, Mencken, and Sinclair Lewis (probably because it was a novel about a man written by a woman), the book won a Pulitzer Prize.
Mari Sandoz. This writer from the Panhandle grew up on a homestead, the daughter of a domineering Swiss-born father, whose life she recalled in Old Jules (1942). Her early novels were declared offensive for their less than rapturous portrayal of her home state (a sure sign that they are worth reading). She’s best known for her books about the Lakota, including Cheyenne Autumn (1953). She won the Owen Wister award in 1964.
Wright Morris. Also disliked for his unvarnished portrayal of small town Nebraska, Morris was born and spent his boyhood in the same county where I grew up. Merrick County is in central Nebraska near the Platte River, one of countless stops on Highway 30, which crosses the country. Morris won the National Book Award twice for novels about his home state: The Field of Vision (1956) and Plains Song (1980). His novel Ceremony in Lone Tree (1960) concerns a dysfunctional Nebraska family and features a fictionalized Charles Starkweather, who went on a crime spree with his girlfriend in the late 1950s.
Tom McNeal. In McNeal’s novel Goodnight, Nebraska (1998), a young couple forges an independent relationship in an isolated small town in the treeless, rolling terrain of the Nebraska Sandhills. A memorable sequence in the novel describes a hunting party that grows progressively unnerving, as some of the more trigger-happy in the group get steadily drunker and more frustrated at the lack of game. 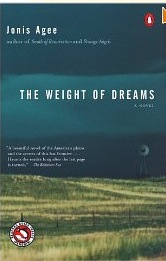 Jonis Agee. Cattle ranchers and small-town folks figure in Agee’s well-written novels. A personal favorite is her noir-like The Weight of Dreams (2000). In an account of hanging onto a family ranch on the brink of bankruptcy, it’s also a crime fiction story leading to a courtroom drama, a bitter family melodrama, a tale of guilt and personal salvation, a passionate and sensual love story, a travelogue portraying the stark beauty of the Sandhills, and an examination of white/Native American relations. For a recent interview with the author go here.
Dan Chaon. Short story writer and novelist Dan Chaon grew up in western Nebraska. The stories in his first collection Fitting Ends (1996) are often set in a fictional Nebraska small town. They typically concern youthful characters struggling with the mysteries of emerging identity. In one story, a young man discovers that a fraternity brother injured in a car accident is no longer the person he once was. For recent interviews with the author go here and here.

Roger Welsch. This guy works a narrative center somewhere between Mark Twain and Garrison Keillor. His collection of essay-stories in It's Not the End of the Earth, But You Can See It From Here (1999) memorialize the town and inhabitants of Centralia (aka Dannebrog, pop. 356), Nebraska. Life in Centralia gravitates toward the Town Tavern, where we meet Welsch's fictionalized friends and neighbors. In my favorite piece, "Racing Horses at the Centralia Fourth of July," the author's teenage daughter teams up with a burly cowboy to take second place in a relay race. 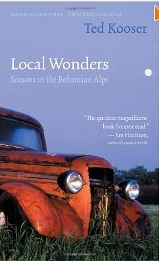 Ted Kooser. I think of Kooser as Nebraska's E. B. White. Chiefly a poet, he's also an essayist, and he wears both hats in his 2002 collection Local Wonders. Master of the light touch, he embodies a kind of risk aversion that celebrates what is steady, dependable, and unthreatening in his world. There are rarely shadows, and when they do appear it is with a surprise that is shocking, as when a woman tells of an elderly aunt whose family was murdered by a farm hand when she was a teenager. Born in Iowa, Kooser makes his home in rural, eastern Nebraska.


Richard Powers. National Book Award winner in 2006, The Echo Maker is set in Nebraska. It begins with a near fatal accident involving the young driver of a truck. The story takes place in Kearney, a college town in the Platte Valley, with the annual migrations of sandhill cranes as a motif. There’s also lots of neuroscience used to explore the ambiguous nature of mind and perception. This should be on an honorable mention list, since Powers is not from Nebraska, but the novel is a personal favorite. I laughed and cried as I read it. For a sample, go here.
Jim Harrison. Another honorable mention, this novelist grew up in Michigan but has written at least two novels set in western Nebraska, Dalva (1988) and a sequel, The Road Home (1998). I’ve read only the first one and found it overwrought in its present-day story but really interesting in its parallel story set in frontier times. Here’s an interview with Harrison from 2007.
Loren Eiseley. From Lincoln, Nebraska, and arguably the finest writer on this whole list, Eiseley didn’t write fiction. He wrote as a scientist, but his vision was always personal. In his essays, he had a remarkable ability to make his subject matter exciting and accessible to nonscientists. Though he has been celebrated as a great nature writer, one of the best since Thoreau, his true subject is Time. Recommended: All the Strange Hours (1975), a series of autobiographical essays covering 75 years. You can get a preview of this book at google books.
Favorite sons. No question in this department, at least for me: Henry Fonda, Marlon Brando, and Johnny Carson.
Did I leave anybody out? Probably.
Photo credits: wikimedia.org
Coming up: Frank H. Spearman, Whispering Smith (1906)
Posted by Ron Scheer at 4:48 AM