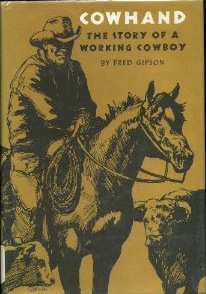 This is an as-told-to profile of Texas cowhand Ed "Fat" Alford, related as a string of yarns you might hear told around the campfire or the bunkhouse at the end of a hard day's work.

Fat was the oldest of a large family of siblings, never married, who gave his life to cowboying and whatever else in the way of work he could scrounge up during the 1920s and 1930s. Gipson has a gift for making these times and the men who lived them come to life with plenty of good humor, even though they were often struggling just to keep a buck in their jeans.

At a young age, he's obliged to support his mother and her several children when his father dies in an outbreak of meningitis. While often entertaining, Fat's story does a lot to take the romance out of the profession and reveal how much plain, sweaty, dirty, exhausting hard work there is in being a "working cowboy."

Thanks to Texas A&M University Press for keeping this entertaining memoir in print.