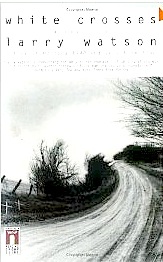 Not sure if this novel from 1998 counts as "forgotten." Not even sure if it was ever much known. Anyway, I found this story of mid-century small-town life and its fascinating character study hard to put down.

The novel begins with a car accident and the deaths of two people - thus the "white crosses" of the title, those roadside markers where lives have abruptly ended.  Written with elements of crime fiction, it's an ironic account of how a well-meaning county sheriff's cover-up attempt leads to a series of worrisome complications and finally to fatal consequences.

Everyone has their secrets and is guilty of something, the sheriff has come to believe, and he is no exception. As author Watson probes deeper into his character, we find the weaknesses and moral ambiguities hidden within an otherwise likable man who happens to represent law and order. The author's frequent digressions help us to know him inside and out, which turns out to be important.

Watson is a fine writer with a gift for illuminating the inner worlds of what seem to be predictable and ordinary people. They seem to fill him with a sense of wonder. Like the pair of bachelors, identical twins, drinking at a bar, or a cantankerous rancher who believes, with scant evidence, that his cattle are being rustled, or the widow who reports that her S&H Green Stamps have been stolen. There is much to be known about them that will never be known - and will go with them to the grave.

Watson has a couple other books written with sheriffs as central characters in this same western town of Bentrock, Montana: Justice and Montana 1948. I've read all three and liked them. I believe they are all still in print.
Posted by Ron Scheer at 5:23 AM