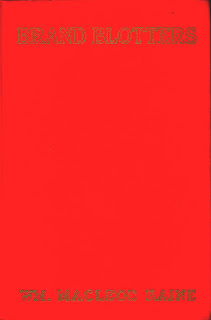 This is a darn curious book. I really had to force my way through parts of it, and then other parts just took off like fireworks. Part of the experience was the wartime printing of the book, as explained on the title page:

This book, while produced under wartime conditions, in full compliance with government regulations for the conservation of paper and other essential materials, is COMPLETE AND UNABRIDGED.
The paper quality was so compromised, the pages were practically crumbling in my hands.
William MacLeod Raine (1871-1954) was a hugely prolific writer for over fifty years. Raine was British-born, emigrating to the U.S. with his family when he was ten. He grew up on a cattle ranch on the Arkansas-Texas border, got a college education, and began work as a teacher and journalist in Seattle before settling in Denver.
Most of his fiction is set in the West, and he seems to have found ready publication in the pulps. By 1911, when Brand Blotters was published, Raine had already seen 40 some works of his fiction in the magazines. The book is actually two novellas, which seem to have appeared separately as “The Brand Blotters” in The Popular Magazine and “Dead Man’s Cache” in People’s Ideal Fiction Magazine, both in January 1911. 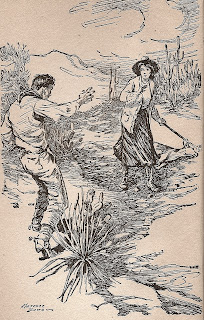 Raine as a storyteller. Raine can spin out a plot of considerable complexity. A lot of both novellas in this book involves mistaken and assumed identities, among a large cast of characters, a few with multiple names. I’m thinking Raine must have been affected by an early exposure to Shakespeare.
Instead of a cowboy or lawman as a central character, Raine gives us a smart, spirited young woman, Melissy. While hearts are set aflutter at points in the story, this is no ranch romance. She is surrounded by a variety of men of various stripes, ranging from the brave young sheriff, Jack Flatray, to a despicable villain and gang leader, Black MacQueen. All of them are fiercely handsome men who take a romantic interest in her.
That interest usually has a degree of the carnal, and part of the drama is her unsure response to the feelings these men stir up in her. Raine is pretty fearless in diving into the pool of steamy passions – and the deep end at that. Here’s one example:
She was a splendid young animal, untaught of life, generous, passionate, tempestuous, and as her pliant, supple body lay against his some sex instinct old as creation stirred potently within her (p. 127).
The man Melissy is destined to end up in the arms of is the young sheriff. But Raine gives him little time on stage. His absence leaves her vulnerable to the advances of others, and as all her interactions with them play out, the book begins to resemble a coming-of-age novel. 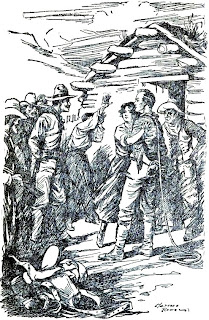 East vs West. This theme has come up in most of the early westerns we’ve looked at here at BITS. If we see it as a way of exploring the meeting of boundaries on the frontier, that theme shows up again.
The “eastern” characters this time are mostly from the South. Melissy herself grew up in the West (and spends a year at college in Denver in the passage of time between the two novellas). But her rancher father came from Tennessee, and several other characters come from Arkansas.
The Arkansans bring with them a 40-year family feud, which in its scope harks back to the Hatfields and the McCoys. Several men have died so far, and one survivor has followed another out West to even the score yet again. A parallel version of this eye-for-an-eye justice also pops up between a completely different set of characters by novel’s end. Melissy gets involved in both of them.
Revenge drives a lot of western stories. It’s part of a system of justice that predates the “coming of the law” and the arrival of civilization on the frontier. Raine reminds us of its American roots in earlier western frontiers, where it seems to live on. His own youth in the American South may have been a contributing factor to this plot element.
Realism. The story content of Brand Blotters is mostly pulp western material. The title suggests that action will involve cattle rustlers. It doesn’t. There’s only a highly contrived and implausible situation at the beginning of the book in which someone is taken to be altering a brand, but it’s a misunderstanding. When later explained, it’s not too convincing.
Instead we get a stage coach robbery, a range war between cattlemen and a sheepman, a kidnapping, posses, shoot outs, escapes, and much racing around on horseback. There’s a cattle stampede in the opening pages, but cattle and cowboys are part of the landscape, not the narrative.
However, much of the action would fit easily into the standard B-western. Sheriff Jack Flatray does a nifty job of crime detection that puts him in a league with Sherlock Holmes. It’s wryly and cleverly unfolded – James Garner would have had fun playing the scene – but it’s a masterful piecing together of clues you only find in fiction.
Wrapping up. Each of these early western writers puts their own spin on this material. In Raine’s case, the conventions of the genre are beginning to take over. He succeeds as a storyteller when he brings in the freshness of believable characters. Dialogue is sometimes wry and entertainingly ironic. A narrative device or plot twist can be nicely unexpected.
But he doesn’t succeed when the plotting gets contrived. You have to off-load truckloads of disbelief sometimes. This happens when the plot moves forward by an overheard conversation, a coincidence, or a 1000-to-one chance taken by some character. One character, Bucky O’Connor, appears very briefly in the novel – an Arizona lawman of considerable renown. If you want to know more about him, you have to read Raine’s novel Bucky O’Connor, published in 1910. I think I will.
Image credits.
All illustrations by Clarence Rowe