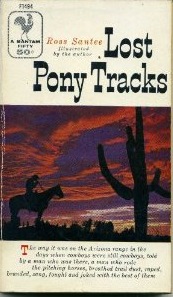 First published in 1953, this book is currently out of print, and it shouldn't be. It's a fine, wonderfully written, sensitively drawn memoir of cowboying in Arizona in the years before and after WWI. Ross Santee (1889-1965) was 26 years old when he left his small-town Iowa roots and a struggling career as an artist in New York to spend some time with his family in Arizona.

There he took a job as a "lowly" horse wrangler for an outfit near Globe. Over the years, as a western writer, who illustrated his own books in his distinctive style (now much appreciated), he based his stories and novels on this experience of the everyday lives of men and their horses.

Santee was a perceptive, thoughtful, and observant writer who captured in accounts of incidents and conversations a depth of social history that is hard to find in other books of its kind. It's also rare to find a portrayal of cowboy life so heart-felt. 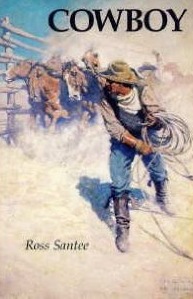 He had his complaints about men whose faults and deficiencies made them ill-suited to being cowboys. But he was chiefly interested in the many men he regarded as admirable for their one-of-a-kind personalities and their strength of character. Among them is the foreman, whose early years on the range are recounted in Santee's novel Cowboy (1928).

Many others he writes of are captured with a precise and loving eye for detail. There is a generous spirit and a gentle humor throughout this book that is sometimes sentimental without ever being corny. In his depiction of daily life in an all-male work environment, Santee gets it all right. His books belong on any shelf of western literature.