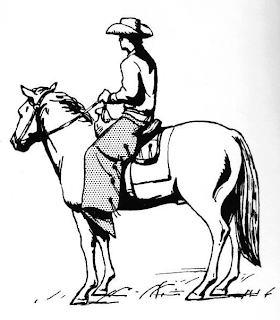 Just about all the books I review here on BITS are "forgotten books," but here's another one. This early novel by prolific western writer Dane Coolidge (1873-1940) was first published in 1913, a decade after its famous predecessor The Virginian (1902). There are many of the same elements in this story: an easterner who's a fish out of water in the West, a rivalry between a man of strong principle and one with none, a close friendship between two men, class differences, and a long-running and much frustrated courtship.

A big difference is that having grown up in rural California, Coolidge knew of the West and ranch life much better than Owen Wister. And he was more interested in representing the actual work of real cowboys - something entirely missing from Wister's novel. Based on his own field research, Coolidge's novels describe the business of working cattle, living conditions on a ranch, and the ins and outs of cowboy culture. He knows, for instance, the three books to be found in any bunkhouse.

Set on the Bat Wing ranch in southern Arizona, this story tells of a young Easterner, Bowles, who falls in love with the daughter of a rancher. Through luck and persistence he manages to prove himself as a cowboy and win her hand. Through him, we learn of the grueling work of rounding up and branding cattle. We experience the difficulty of being accepted into a fraternity of rough-riding men who labor tirelessly, amuse each other with long-winded tales, play practical jokes, get drunk in town, haze newcomers, and just as easily square off into heated disputes and fist fights.

One of the more strongly drawn characters is Gus, a stereotypically grumpy camp cook. Another is Brigham, a lapsed Mormon with grievances about his church that keep him from marrying. There is some humor in all this but little romanticizing. The subduing of an unbroken horse, for instance, is described in brutal detail.

This one is for readers interested in the old West as it was actually lived. Without gunfights, chases, outlaws, Indians, or a mounting body count, he maintains our interest, rings a range of emotions, and keeps things moving along. Available free at Barnes and Noble for the Nook.