Broken Arrow was a milestone in the portrayal of Native Americans in Hollywood westerns. Credit for that goes to the writers and to actor Jeff Chandler, who played the famous Apache chief, Cochise.

I had steered clear of this movie for years because of the casting of Chandler, another white actor in the role of an Indian. The big surprise when I finally saw it was that Chandler walks away with the movie. The calm dignity of his performance rarely betrays a hint of either stereotyping or sentimentality. You watch him and say to yourself, “This was a man.”
Screenwriter Albert Maltz based his script on Elliott Arnold’s well researched, Blood Brother, published in 1947. This historical novel recounted the friendship between Cochise and an American, Tom Jeffords, played by James Stewart in the film. 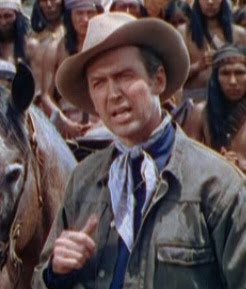 This was another surprise. I didn’t know until I did some reading that there was an actual Tom Jeffords (1832-1914), who with the help of an actual U.S. Army general, Oliver Howard, brokered a peace treaty with Cochise in 1872. Never mind that the treaty was broken a few years later, after the death of Cochise. But it brought an end to years of bloody hostilities between Apaches and white settlers in southeast Arizona.
So the film is a happy meeting of history and myth. Here are two men who seem to walk straight out of legend. The scale of their personalities and depth of character seem larger than life. Yet they lived, and their story is a matter of history.
A word of credit also goes to director Delmer Daves, who directed a number of westerns, including my personal favorite, the original 3:10 to Yuma. With this film he helped James Stewart make a career shift into playing roles in westerns. He also surely shares the credit for Jeff Chandler’s performance. Talk about a career shift, Chandler and his distinctive voice had been known by millions for his role in the radio comedy “Our Miss Brooks,” where he played a bashful biology teacher.
Meanwhile, Daves makes beautiful use of the location shooting in Arizona, filling the CinemaScope screen with striking, colorful visuals. Plus, he has an eye for realistic details, like Stewart’s sweat-stained hat. 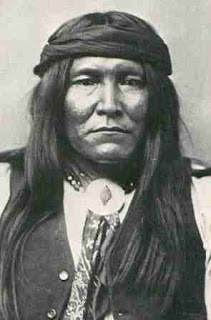 Some political geography. The film highlights the impact of the Apaches’ attacks on the U.S. mail run as it passed between El Paso and Tucson through their tribal lands. (Cochise at right.) A modern viewer may not appreciate how isolated a city like Tucson was during that time.
The Butterfield stage line, which carried the U.S. mail, had been discontinued with the start of the Civil War in 1860. It’s route passed through Texas, and Texas had joined the Confederacy. California was accessible only across forbidding terrain, which left southern Arizona as good as cut off from the rest of the world. Now the Apache had cut them off again. (The film has the Butterfield line being reopened in the 1870s, but from what I’ve read, any stagecoach service then would have gone by another name.)
The film shows Tucson to be a thriving town of some size. If you had a picture of it as a sleepy, dusty frontier settlement, as I did, you’d be wrong. A street map of Tucson in 1870 shows that it had grown considerably. It was the capital of Arizona Territory, with a population of 3,224. 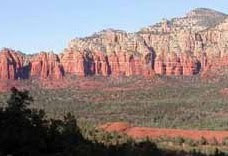 Departures from history. The film was shot around Sedona, Arizona, which has been the location for countless Hollywood movies because of the dramatic landscape nearby. Sedona, however, is in central Arizona, and the Chiricahua Mountains where the Apaches lived is in the far southeast corner of the state, near the Mexican border.
Native American actor Jay Silverheels (who played the Lone Ranger’s companion, Tonto, on TV) gets a rousing turn as Geronimo in the film. Parting company with Cochise at a meeting of the tribe’s leaders, he takes a few followers with him. While Geronimo did not make peace with the whites and Mexicans, there is apparently little or no evidence that he confronted Cochise or attended this meeting. 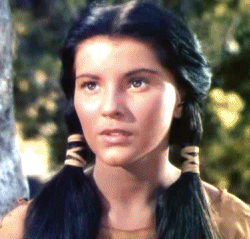 Myth again. Finally, the film has Tom Jeffords wooing and marrying an Indian maiden half his age. For me, this concession to romantic license rings false. For one thing, there is too much of the Hollywood myth going here about the appeal of white men to women of color. Sonseeahray (Debra Paget) finds this man irresistible from the start.
Then her death at the end is far too convenient. Once the movie has made a commitment to an interracial marriage, it backs away from it. “Her death,” Stewart’s character says, “put a seal upon the peace.” Seems like a big price for her to pay, especially when the treaty lasted only two or three years.
In 1875 the tribe was relocated from the land promised to them because they happened to be residing on deposits of gold, silver and other extractables. In the last words of Cochise in the film, “Without the will to peace, treaties mean little or nothing.” 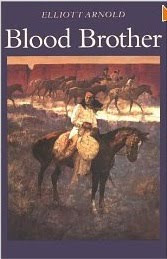 The writers. Elliott Arnold, author of Blood Brother went on to a career as a writer for television. He wrote multiple episodes for Bonanza and Rawhide and the entire 72-episode series for Broken Arrow, which ran 1956-58 on ABC-TV.
However, screenwriter Albert Maltz, who adapted Arnold’s novel to the screen was not credited in 1950 for his work. He had been blacklisted by the industry for alleged political sympathies too far to the left of center.
He watched, surely with mixed feelings, as his screenplay received a nomination for an Academy Award. The script also won the Award for Best Written Western by the Writers Guild of America. When Oscars were handed out, the film was honored with an Award for Best Supporting Actor, won by Jeff Chandler, and Best Cinematography.
America in 1950. The anti-communist witch hunting of the McCarthy era can be sensed in the way Maltz puts liberalism under siege in some scenes of the film. Stewart’s tender-hearted Jeffords is no fierce champion of just causes. He simply has a sense of decency that is willing to risk regarding “enemies” as human. An Indian mother somewhere cries, he realizes, when her son is killed. 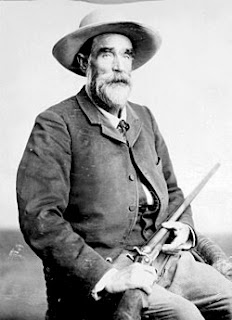 In Tucson, he’s nearly hanged by a crowd of rough men who accuse him of being an “Indian lover” and a traitor. From the beginning of the film to its tragic end, he’s up against the greedy, racist, fearful whites who are bent on a policy of genocide. Only General Howard, the so-called “Christian general,” seems to see things his way. The film is a celebration of the trust that slowly builds between Cochise, Jeffords, and Howard. (Tom Jeffords at right, 1895)
Some will say it’s a liberal myth that the movie embraces. And maybe so. When it comes to viewing political forces at work in the world, myth is usually at the root of people’s beliefs. It makes a kind of sense that the western has been a terrain where those myths have been played out over and again.
Here’s a scene from early in the movie (trimmed down to standard ratio) as Jeffords makes his first contact with Cochise. Everyone speaks in English, but it’s explained at the beginning that Jeffords and Cochise communicated in the chief’s language. Jeffords had studied Apache language and customs:
I can’t vouch for the authenticity of the Indian costumes, body decoration, or rituals. The women in the movie seem to have a lot of fringe, which doesn’t show up in the photos I’ve seen of Apache women, but it matters that the film treats Indians respectfully. In 1950, that was something of an achievement in itself.
Picture credits:
1) Jeff Chandler as Cochise, aveleyman.com
2) James Stewart as Tom Jeffords, dvdbeaver.com
3) Photo of Cochise, heyokamagazine.com
4) Arizona landscape, sedonafilmoffice.com
5) Debra Paget as Sooseeahray, aveleyman.com
6) Photo of Tom Jeffords, taken in 1895 (age 63), landofcochise.com
Coming up: Review of Fort Apache
Reminder: Saturday July 24, 2010, is National Day of the Cowboy. Nominate a cowboy for the Fictional Cowboy Hall of Fame.
Posted by Ron Scheer at 7:20 AM