Clouds are kind of rare during the high summer here. I ran for my phone to take this picture of a buttermilk sky on Monday. The palm tree is my neighbor’s, who explained to me once that palm trees are really a highly evolved form of grass. (I'd fact-check that first before I'd pass it on.) 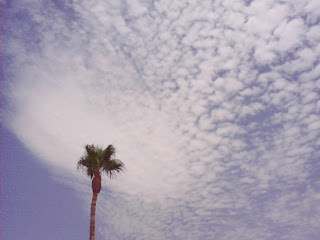 Palms are water-loving plants and only one species is native to the Coachella Valley. Over in Palm Canyon, near Palm Springs, you can see the last of a forest of them that thrived here when the climate was more tropical. This is not one of them.
Anyway, clouds don’t go unnoticed in the desert, especially when they block the sun a little and you can feel the temperature drop several degrees. Which is welcome in July when the day-time highs can be way over 100.
These days I’ve been mentally in Montana, reading B. M. Bower’s enjoyable novel Chip of the Flying U, published in 1906. She arrived there as a teenager with her homesteading relatives in 1889, when Great Falls was being built. And I’m remembering a car trip through that part of Montana two summers ago.
I drove north through the Smith River Valley, and approaching Great Falls I took these pics of ranch and farmland. It was May and still early spring, so the trees look leafless. (The sign in the field, if you can't read it, says, "God Bless Montana.") Then I came out onto this vast treeless tableland, which is sewn to wheat. That ridge of mountains in the distance is so typical of central Montana. You seldom get out of sight of them somewhere in the distance. 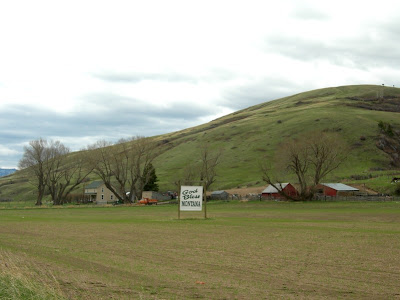 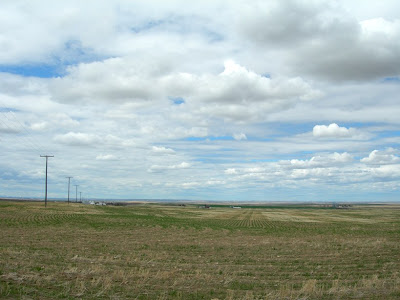 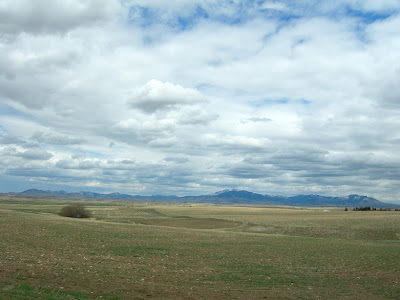 Great Falls was built near a series of falls on the Missouri River, which proved a challenge to the Lewis and Clark expedition. They had been expecting to hew down trees to make river craft as needed, and were surprised to discover the prairie treeless. Portage around the falls was long and difficult. There’s a handsomely designed new museum on the banks of the river outside of town where you can learn all this. 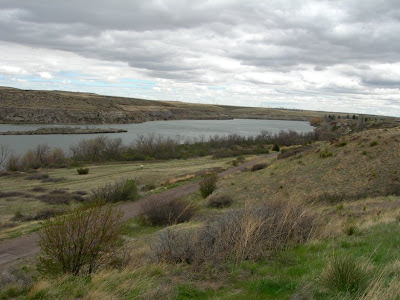 Great Falls was also the home of cowboy painter Charles Russell. He was an acquaintance of B. M. Bower. Some think the character of the artist-cowboy Chip in her first novel is modeled after him. Russell provided illustrations for that novel when it was published. There is another handsomely designed museum in town dedicated to his work, and next door is his home and his studio, both open to the public.
The turn of the century was a boom time for Montana, and you will find the streets of towns like Great Falls graced with old buildings that date from that period. This is a photo from Main Street in Lewistown, with a building dating from 1904. 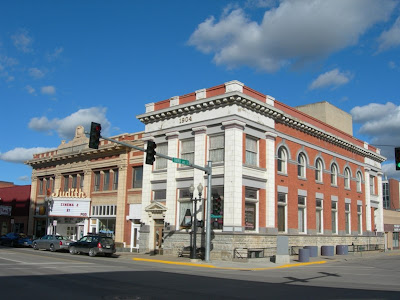 Homesteading had a few good years in Montana, but it turned into a bust, as most years there was too little rainfall for dryland farming and the winters were long and brutal. Today you will find the remains of old farm buildings standing in open wheat fields and long abandoned commercial buildings along the streets of once-thriving country towns. I found the ones below along the road between Great Falls and Lewistown. The store with the false front is located on the edge of a village called Moccasin. 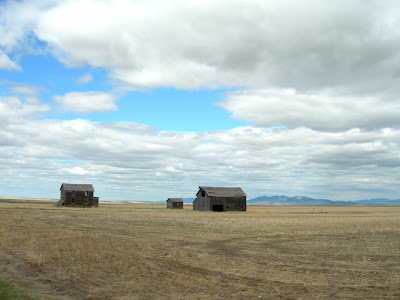 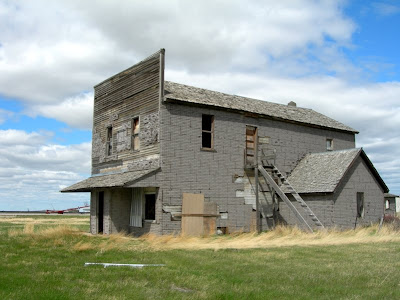 With modern transportation and communications (there’s wi-fi today in the small-town diners and cafes), it’s hard to imagine living conditions out here a century ago. And yet you read a novel like B. M. Bower’s and you realize that people somehow got along anyway. At least for a while, until hope ran out, as it did for many, who moved on.
Frontier life was maybe hardest on those like Bower herself, who had creative talent and ambition and felt constrained by limited opportunities. She literally wrote her way out of Montana, divorcing her husband and leaving for California as soon as she became a published author. It would probably amuse her that a half century later, writers would actually go there to live.

Bower and her family tried to put down roots in north-central Montana. There's an excellent book about the homesteaders who settled in eastern Montana, east of Miles City. They also had dreams of farming communities like they'd known back in the Midwest. Today this area has reverted to ranchland, and there are scarcely populated remains today of little towns, like Mildred, below. 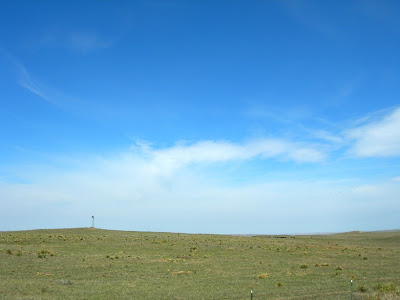 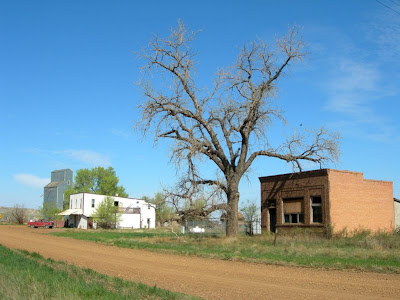 The book is Jonathan Raban's Bad Land: An American Romance, about the boom-and-bust period of 1910-1925 in eastern Montana. He found and interviewed the descendants of the homesteaders from that time, and he reconstructs the time and place and the way of life that flourished, as long as the rains fell, and then disappeared as soon as the next cycle of drought set in.

An argument he makes is that memories of betrayal left in the wake of failed homesteading account in part for rural westerners' deep distrust of government, "progress," and urban liberalism. For anyone interested in that period of history in the far West, it's a richly rewarding read, and I recommend it.

Coming up: Saturday matinee: Lash LaRue in Border Feud
Posted by Ron Scheer at 4:41 AM