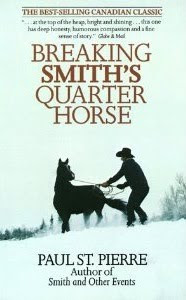 Three years ago, I read a collection of Paul St. Pierre’s stories, Smith and Other Events about a collection of ranchers and Indians living in “Cariboo Country” of central British Columbia. The quirky ironies and self-deprecating humor of the stories I can only describe as “Canadian.” I finally got my hands on a novel by the same author, Breaking Smith’s Quarter Horse, published in 1966. It is more of the wonderful same.

Smith is by his own description a small rancher, with  horses, Herefords, and hayfields in a mountainous area known as the Chilcoton, where there are two seasons – winter and August. Smith is married to a not so long-suffering wife, Norah.
They have four sons, Sherwood, Rooosevelt, Exeter, and John, the first three named by Smith himself. It is winter, and the oldest two are away at boarding school. The third is off somewhere waiting for an itinerant dentist. Only the youngest, an infant, is at home. 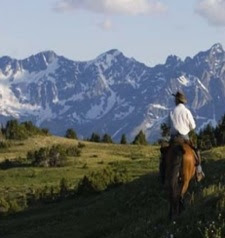 It is the 1950s and the Smiths live by what even then would be considered primitive standards. Part of the house is the ranch’s original log cabin, and you climb a ladder to get to the upstairs. There’s no electricity or mail delivery. The radio is broken.
The title of the book is ironic. While it begins with Smith’s intention to gentle a quarter horse, the story doesn’t get around to it until the last page. Before that comes a long, narrative digression that involves the surrender of a member of a local Indian tribe for murder, the subsequent trial, and Smith’s futile attempts to “mind his own business” and not get involved.
This is a laugh-out-loud book that never insults the characters that get tangled up in its comedy of errors. Impervious to the insistence of others that he is “smart,” Smith knows that he’s just an ordinary man trying to make a living from ranching – against all odds. When his wife suggests he might have better success if he read up a little on the subject, he tells her, “Hell, I’m not running this place half as good as I know how to already.” 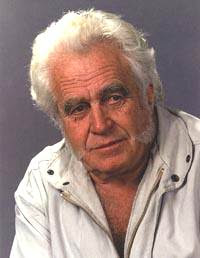 Only the self-important get pilloried. The Crown Counsel, attempting to get a murder verdict, fares not so well, as do unnamed civil servants and officials all the way up through the Royal Mounted Police to the upper echelons of power in Ottawa.
Based in Vancouver, St. Pierre had a varied career as a journalist, police commissioner, playwright, and politician, serving for a time as a Member of Parliament. Based on his stories and characters, his series “Cariboo Country” ran on CBC from 1959-1967. Committed to a degree of accuracy, it was filmed on location and featured Native Americans like Chief Dan George in key roles. St. Pierre received the Western Writers of America Spur Award in 1984.
First published in 1966, Breaking Smith’s Quarter Horse is now sadly out of print, but copies can be found at online booksellers. The same is true of the equally enjoyable Smith and Other Events.
Source: B.C. Cowboy Heritage Society
Picture credits:
1) Cariboo Country, bon-voyage.co.uk
2) Paul St. Pierre, bcchs.com
Coming up:
Posted by Ron Scheer at 6:38 AM