I picked up this novel by Dane Coolidge mainly because of Jon Tuska’s introduction, written in 2000. Tuska is co-author of The Encyclopedia of  Frontier and Western Fiction. There’s not much been written about Dane Coolidge, and I wanted to see what Tuska had to say. 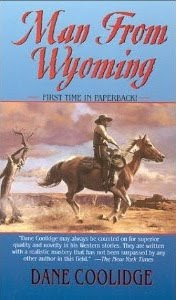 I’d also read two of Coolidge’s early novels, Hidden Water (1910) and Bat Wing Bowles (1914), the one that got me interested in Coolidge in the first place. Man From Wyoming was first published in 1924 as The Scalp-Lock, and then revised and renamed for publication in 1935 in the pulp magazine Western Novel and Short Stories. I wanted to see if and how Coolidge had matured as a writer. (The edition I’m reading was published in 2001.)
Tuska says Coolidge is interesting for the way he kept pushing the genre he helped invent in new directions. And there’s a lot that’s unconventional about Man From Wyoming. For starters, the main character, Clayton Hawks, is by temperament not a man of action. He is almost too indecisive for a western hero.
Meanwhile, Coolidge has really stacked the cards against him. A man with a Boston background, he arrives in Wyoming to find out why his father’s ranch is losing money. Several hundred steers have disappeared, and rustlers are suspected. It turns out that the manager of the ranch, William Bones, is a crook, and all the cowboys are doing the rustling.
To make matters worse, Hawks’ fiancée, Penny, does him wrong by falling big time for the charms of the head rustler, Jim Keck. When Keck and his men are fired, Penny takes off with him. 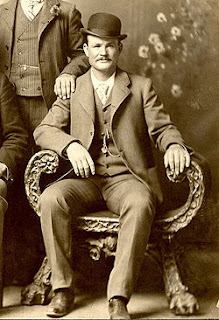 The range, in fact, is ridden with outlaws, and Hawks is hard pressed to find an honest man. Instead of going it alone, he keeps having to put his trust in men who are less than trustworthy. Bones is one of them. Another is the affable Rooster Raslem, a train robber modeled after Butch Cassidy (at left). A Sundance Thorp also figures in the story.
When scores of railroad detectives are unable to make a dent in the criminal activity, the local Cattlemen’s Association hires a killer. He goes by the name of Seldom Seen. Like the pairing of Hardy and Creede in Hidden Water, he’s the antithesis of the protagonist – and similarly, far more interesting. Readers have compared him to Tom Horn (below).
Seldom Seen’s calling card is his name written on a cigarette paper with the S’s and e’s drawn as little snakes. His M.O. is to infiltrate the ranks of the thieves by passing as a jolly, rugged cowhand. He’s a man that other men instantly take to (something that can’t be said of Hawks). All he has to do is leave a few of his “calling cards” around, and thieves don’t just take to the hills. They disappear for good. 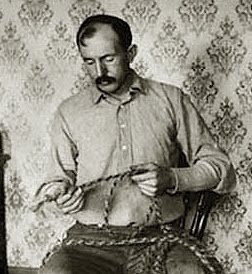 At first Hawks is somewhat in awe of this man, who calls himself “Hicks,” but eventually he regards him as “savage,” resulting in part from his mixed blood:
When . . . Hicks had told him of shooting men down like wolves, Hawks had remembered an Indian orator, giving point to his harangue by acting out his treacherous killings. With them cunning and treachery were counted as manly virtues, second only to courage in battle. (pp. 178-179)
With both Rooster and Seldom Seen, Coolidge shows that he can create vivid and one-of-a-kind characters that leap from the page. Hawks isn’t so much flat by comparison as difficult to identify with. Yes, he’s out-gunned and out-maneuvered, even out-classed, as western heroes often are. But he lacks the willingness to take action without fear of the consequences. The extent of his risk-taking is to make compromises that usually don’t work out.
Interesting that Coolidge has a killer named “Hicks.” Put Hawks and Hicks together, and you have a man of both character and action. There was this same split in Hidden Water, the result being a conflicted “modern” man on one hand and a caricature of rough frontier masculinity on the other. You might say the journey of the hero in western fiction has been an attempt to blend these two into one character. 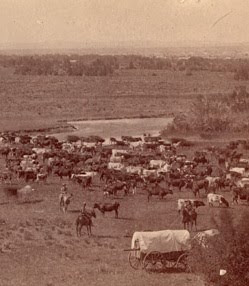 When Hawks finally takes matters into his own hands in the final chapter, he may have been following in the footsteps of the Virginian. Remember, he puts off dispatching Trampas until the gun duel at the end. When Hawks finally resolves his differences with the villain Keck, however, there’s little satisfaction in the way he does it. Keck has already beaten him.
Coolidge may have wanted the irony and ambiguity in this ending. A reading of the original version of the novel might shed more light on that possibility - and I intend to do that. The whole novel is a dark (almost noir) vision of a frontier West without an honest man or woman in sight. All have been seduced by the serpent in the Garden.
His allegiance in the three novels I’ve read so far is to a code of values from the civilized East, where there’s a more polite concept of fair play. Hawks himself understands that this renders him “weak” as a man. Were Hawks to have followed the code of the West, this may have been a different story. 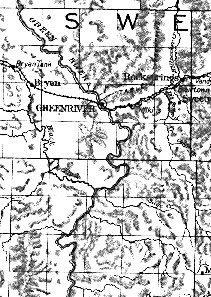 Assorted observations. The novel is set in southern Wyoming along the border with Colorado and Utah. It is most probably the 1890s, the era of range wars and train robberies. Coolidge lays out the landscape over a distance of maybe 75 miles of open range, cedar breaks, canyons, and hidden valleys leading south to the Green River. While characters come and go, the action of the novel is always specifically located somewhere in this region.
You may have puzzled, as I did, over the odd term “scalp-lock,” which Coolidge used as the original title in 1924. Ramon Adams defines it as a long lock of hair worn by Indian warriors. In this novel, its use is somewhat more sordid. Keck, the smooth-talking womanizer, takes a lock of hair from every woman he seduces and weaves it into a single braid that he carries around with him and shows off when he’s drunk. It figures into the plot at a couple of key points.
As for diversity, I’ve already mentioned Hawks’ perception of Indians. While there are no Mexicans to disparage in Wyoming, a “Negro” named Curly Bill runs with the gang of thieves. Hawks distaste for the man does not come entirely from his line of work.
On the subject of cattle rustling, we learn about hair branding, which the rustlers cleverly use to transform a B brand into a heart-shape brand.
Besides introducing a few lively characters, Coolidge is good at chase scenes. At one point Hawks is pursuing a herd of stolen cattle, never quite catching up with them, until Keck lets them get swept away in the Green River. On another occasion, Hawks follows a small army of railroad detectives along the same route in pursuit of train robbers. These sections are real page-turners.
Language. Unless this reprint has been updated for modern readers, Coolidge’s characters are free to say “son of a bitch.” A whorehouse in the first chapter is referred to as a “hog ranch.” Still, there’s the quaint use of “by grab” as an expletive. Otherwise, the talk is pretty well cleaned up.
There are far fewer out-dated expressions compared to Hidden Water. The term “cedar snappers,” is used to refer to cattle thieves. May have something to do with cedar brakes, which would provide cover for cow snatching. Other terms:
jasper – idiot, hick
powder house – stone building for keeping dynamite
catspaw – “someone who is tricked into doing something dangerous or foolish on behalf of someone else” (word-detective.com)
yield the palm – experience defeat (cf. New York Times headline: “DIBBLEE TO CAPTAIN HARVARD.; Crimson Players Yield the Palm to Pennsylvania.” November 21, 1897)
solemncholy – solemn and melancholy, woe-begone, troubled (For an interesting use of the word dating from the Civil War, read here)
That’s it for Dane Coolidge for now. I’ll be back before long with more. God willing and the crick don’t rise.
Further reading:
Review of Hidden Water, Part 1 and Part 2
Picture credits:
1) Butch Cassidy – wyomingtradingpost.com
2) Tom Horn, wyomingtalesandtrails.com