The more I watch old westerns, the more I appreciate that they were made for grownups. The kids in the audience were there to learn, not to be entertained. If they paid attention, they’d learn how adult men and women behaved, for better or worse. There was excitement at appropriate intervals – for the kid in everyone – but the meaning of what came in between was chiefly for the adults, and for kids to ponder. 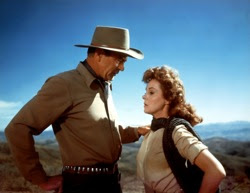 Garden of Evil is maybe a strange name for a western. But given to a story of how greed, self-interest, and sexual desire get people into trouble, it is not far off the mark. The set-up is simple. A woman enlists the help of four men to rescue her husband, who is trapped in a gold mine deep in the mountains of Mexico.
The men have been set ashore indefinitely after their ship founders on its way to the gold fields of California. There’s Gary Cooper, a man of few words who reveals only that he’s been a sheriff. There’s a talkative gambler, played by Richard Widmark, who befriends him.
Tagging along is an impulsive and quick-tempered younger man played by Cameron Mitchell. Joining them is a tall, dark, and handsome hombre played by Mexican actor Victor Manuel Mendoza. He and Cooper converse in Spanish, and with your Spanglish you can easily follow along. (The ubiquitous Whit Bissell was apparently not available for this film.)
The woman (Susan Hayward) packs a pistol and means business. She is Anne Baxter’s counterpart all over again (see my review of Yellow Sky), better dressed but holding her own against a tag team of men. When the Mexican hombre secretly leaves marks along the trail to the gold mine, she gets rid of them. When the “youngster” makes a pass at her, she puts up a good fight. 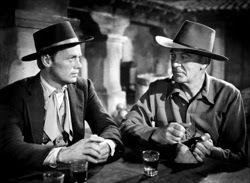 Risk factors. A real test of everyone’s mettle comes early in the trip as they ride a narrow trail along the face of a cliff. It’s unnerving enough for someone with acrophobia like me, but they have to leap their horses across a place where the ledge has fallen away completely. That’s where I would have turned back. But nobody does.
The risk factor is ramped up by the presence of “hostiles,” referred to as Apaches in the film. There’s not much evidence that Apaches ventured this far into subtropical Mexico, so you may have trouble taking this as seriously as the film’s characters. But no one seems to have told the Apaches. They eventually show up anyway. And wearing Mohawk haircuts.
The DVD commentary notes that the original script, called The Fifth Rider, was set in Arizona. Then Darryl F. Zanuck decided that Mexico would make a more picturesque location for a widescreen western. The Apaches seem to have come along for the ride.
Complications. The film is structured so that arrival at the mine comes at the mid-point. The husband gets rescued after several days of lying with a broken leg under a fallen timber. Injuries healing quickly and without complication in films, Cooper resets the leg, and before long the husband is riding a horse and ready for the trip back to civilization.

There are plenty of other complications, however, mostly having to do with (1) how they lose the Indians, (2) the husband’s doubts about his wife’s real motivations, (3) who is really in love with whom and how far they’re willing to go to prove it, and (4) who among them is willing to risk their life to save the others. Cooper attempts to solve this last matter by delivering a knockout punch – I won’t say who’s on the receiving end, but it took me by surprise even the second time I saw it.
Needless to say, the trip back is not without some casualties. And Susan Hayward (still in full makeup, her glorious hair unruffled) rides off into a spectacular sunset at the end with one of the five men. I won’t say which one and spoil it for you.
The film was directed by one of Hollywood’s able veterans, Henry Hathaway, and the music was from Bernard Herrmann, who scored Citizen Kane, Psycho, and Taxi Driver, to name a few. Shot in CinemaScope and Technicolor, and almost entirely on location in Mexico, it is as visually stunning as it set out to be. Here are the opening credits with Herrmann’s stirring overture:
History-to-myth scale. The story leans heavily toward myth. It practically starts out with “Once upon a time in Mexico . . .” But it is played out against not one but a whole range of sweeping landscapes. At least 80% of the film takes place outdoors, which for me is important in a western. So one kind of balances out the other.
The only really false note is a saloon scene that comes at the beginning, with Rita Moreno as a sultry cantina singer entertaining the male customers. Good to see Rita working, but put the whole scene in a film-noir night club, and you wouldn’t have to change a word of the script. It’s that out of place.
I’ve already mentioned that Susan Hayward retains her glamour from start to finish. The men remain equally well groomed, no sweat stains, no dust, clean shaven. Then there’s the matter of marksmanship. Riding a horse at full gallop and shooting his rifle behind him, Cooper never misses what he’s shooting at. This stretch of credibility we can forgive. Those Apaches were in the wrong film anyway.
Reportedly Garden of Evil was a big box office hit in 1954. Gary Cooper is as fine an example of a western hero as a male of any age could hope to look up to and admire. The women in the audience were surely not disappointed either.
Fox has released a restored version of the film in letterbox, with a commentary by four music historians who discuss Bernard Herrmann’s score. Plus other features. You can get it in a boxed set with two other western classics: Rawhide (1950) and The Gunfighter (1951).
Picture credits: doctormacro.com, filmforum.org, filmjournal.net
Coming up: Reviews of Rawhide and The Gunfighter.
Posted by Ron Scheer at 6:17 AM